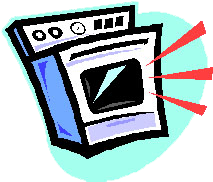 Here’s something we’re up to that may interest anyone else who has old reel-to-reel tapes in storage: My station, Kiss 108 in Boston, is celebrating 20 years on the air. This means playing back old audio stored on reel-to-reel tape for our retrospectives. It turned out, most of those tapes would no longer play... even the ones properly stored in a continuously climate controlled environment (those actually were worse than the improperly stored tapes). You may know the situation: the tape squeals, the oxide scrapes off onto the tape head assembly, gumming up the works so you can’t play, fast forward, or rewind the tape. This was even happening to tapes recorded as recently as ’91!

A couple of summers ago, I read an article in EQ magazine about “baking” tapes. So I went to the local kitchen superstore, bought a Ronco “as seen on TV” Food Dehydrator, and baked a precious old master tape that was hopelessly unplayable. I baked it for 2 hours, turned once, then again for another 2 hours. It not only worked, this tape played like it was brand new! Not a hint of squeaking. The audio integrity was totally intact, and everyone here was overjoyed.

Since then, we’ve been baking about five reels a day (the Ronco food dehydrator will accept six or more reels at a time). This method has worked every time!!! We bake each tape for 4 to 5 hours.

This method heats the tape to the point where it’s almost too hot to touch, but not hot enough to melt the tape. You have to use the metal tape flanges with NAB hubs. You apparently shouldn’t bake acetate backed tapes from the late 1960s (1970s to present tapes I guess are polyester backed—fine for baking). And that’s it.

I’ll bet lots of other stations are experiencing this problem. The solution sounds rather unusual, and I was nervous trying it at first, but I’m delighted to report that it works flawlessly. Now the work I did 20 years ago is not lost forever!