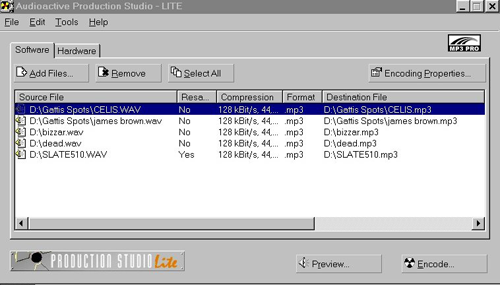 There are a few good tidbits of wisdom that I have been given over the years. Don’t spit into the wind (thanks Jim C. this is SO true!), there are no free lunches (unless you bought last time), and, of course, as my father once told me, “Never pet a burning cat” (okay, I just made that one up—just kidding. I love pets). Ladies and Gentlemen of the production class of 1999, if I could offer you one piece of advice. USE AUDIO ACTIVE PRODUCTION STUDIO!!! It won’t cause skin cancer, and it doesn’t leave you smelling like Cocoa butter.

If you have been following the melodramatic escapades of the music industry, you undoubtedly have heard about the wondrous advent of a little thing called MP3. A compression codec that has stood the audio industry up on its proverbial toes and has revolutionized the way we listen to, send, and receive audio over the net. This is now spilling into our industry my friends, and now is the time to grab on and hold on for dear life. Look for MP3 to make its way into the agency and production house arena, and to even more radio stations sharing resources via the net with this compres-sion algorithm. For the consumer, there are now MP3 walkman type players where you can download audio off the Internet and upload them to a device, like the Diamond RIO player. Then walk away singing your happy tune.

Those of you that use a Telos Zephyr for ISDN sessions have been using MP3 for about two to three years now. Telos has been working with the chief inventors of the codec, Germany’s Fraunhofer Gesellschaft Laboratory, from the beginning. The same folks have teamed up with Telos again to incorporate the same high quality encoding and decoding in software form called Audio Active Production Studio. This comes in two versions, a Lite version (retails for $59.00 plus change for shipping) and the Pro version ($369 + shipping). Check them out on the web at: www.audioactive.com . On the site you will find a wealth of information about MP3 and about the background of the creation of Audio Active Production Studio. You will also be able to download a limited trial copy of the software for demo purposes, and a free MP3 player. Since I have been such an advocate for Winamp, another software player, I spent little time using the Audio Active player until now.

Before I begin discussing the nuts and bolts of the Production studio, let me first begin by saying that on any given day you can find a ton of “freebie” encoders and players on the net. Some are share-ware. Some are demo-ware. Some just encode. Some are “rippers,” which actually take information directly from a CD source and encode it to MP3 (or other) formats. Word of warning: YOU GET WHAT YOU PAY FOR!

Without going into a direct comparison of other encoder/decoders in the MP3 arena, just know that a lot of the “freebies” are NOT licensed by the fine German folks at Fraunhofer Gesellschaft. There seem to be a lot of imitators, but most fall short of the real thing. In my research for setting up e-spots (see RAP Interview May 1999) I tried out just about every encoder out there. One site even went as far as to admit that their software wasn’t licensed to use the MP3 technology, and didn’t know if it was “actually legal” to download it from his site. Gee, that instills confidence doesn’t it? Others I actually paid for, and found they only crashed my system and caused an unthinkable amount of stress trying to re-install operating system components that were blown out or modified in some way to make their software the primary application. In addition, most of these other “encoders” were developed to rip, with the ability to encode WAV files as an afterthought.

With that in mind, the one word that describes the Audio Active Production Studio would be, stable. With as many projects that we have to do as production folks, stability is a must. Telos has been a broadcast industry leader for quite some time and there is a lot to be said for that. Think of it like this, although Nike does not make every pair of sneekies in my closet, boy it’s nice to know that the one pair you do have is made a lot better than the 5-n-10 brand. They will be around longer and feel better too! Come on, you or your company didn’t invest thousands of dollars in equipment just to have the final product be delivered like a ¼-inch tape at 3¼ ips. MMMMmmmm yummy! Are you beginning to see that I may rate this product pretty high? 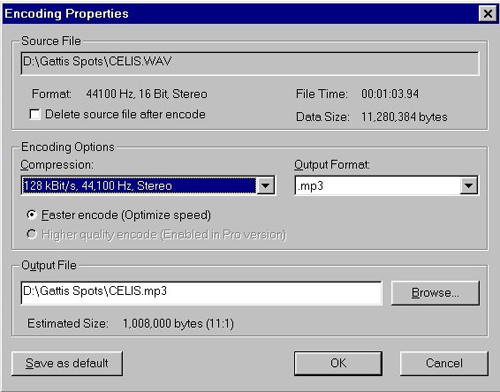 Don’t think of the Audio Active Production Studio as just one piece of software. It’s actually three applications for the price of one. For the most part, I will be dealing with the Lite version of the software. Most of us will only need to encode less than 20 files at a time and don’t need a sample rate of 256kps. However, I will pass on the things you will get with the upgrade to Pro.

First of all, there’s the price. The Production Studio Lite is only 59 bucks and some change for shipping. You can purchase over the phone or on line with credit card then download the pieces separately, but it’s easier to install from the CD that they will ship to you.

* The advanced MP3 compression that’s licensed with our fine German neighbors at the Fraunhofer Lab.

* Encoding 20 files in one batch-encoding job.

With the Studio Lite you also get:

The Pro version includes above and:

* Scripting and more for the power user.

Unless you need all bitrates, you may only need the Lite version. In Austin, we have started using MP3 and email to send “digital dubs” across town. Audio Active Production Studio Lite is the default standard for all groups. The 128kbps is perfect for our usage, plus it has kept the size of the files down. Typically a single :60 spot WAV file recorded at 44.1, 16-bit stereo takes up about 12 megs of disc space. With the 128kbps setting it will create an MP3 file that is typically 970k!!! With an email header attached, the files will be approximately 1.3 megs long. This file size should be small enough to pass through most typical ISPs attachment limitations.

Let’s take a little tour of the Production Studio Interface. The encoder interface is very, very easy to learn. You don’t need to be a rocket scientist or even the instruction manual to figure it out. From your favorite DAW software <<our pick is SAWPro from IQSoft, www.iqsoft.com>> mix your session down to a high quality WAV file, 44.1/16-bit/stereo is fine. I would suggest you create a separate folder for your finished spots that contain both your WAV files and their soon to be encoded MP3 counterparts.

Once you’re ready to encode, open the Production Studio Program. Hit “Encoding Properties” to pick your compression rate and output format. You can pick a separate output location or folder plus select an option to delete your original file once encoding is complete. These will come in handy if you choose to master your work as MP3 files. Click OK to get back to the main program, and start adding the files you want to encode. You may want to preview what the encoded file will sound like. Hit “Preview” or start encoding. Go grab a cup of coffee and when you come back… POW… you’re ready! To compute the amount of space that an encoded file might take up, you can choose the tools menu and hit Calculator. Pick your data rate and length, and the answer is automatically computed. This is a good tool to calculate, say, for a long form show or feature.

The Decoder is just as simple. Identify the MP3 file you want to convert to a WAV file. Specify where you want it and BOOM! This actually takes a lot less time than encoding to an MP3. This feature is also handy when working with Windows-based digital audio work-stations that utilize WAV files. Example: Have your voice person read a few lines of copy, encode to MP3, then send it to you via an email attachment. Then simply decode back to a WAV and drop it in your session! Of course, FedEx will begin to hate you like they hate me now. They’ll get over it.

If you are familiar with the player from Winamp, you will be pleasantly surprised with the Audio Active Player (free for those of you that just want to use the player and not encode). My only beef with the entire package would be the lack of a scroll bar on the Audio Active Player. This makes it easy to blow to any part of a work for preview. A newly added feature is the play list feature. Add any number of files, punch play, and listen all day.

The lack of a ripping feature didn’t concern me because of the quality of final product for encoding WAV files. In fact, during an audio session this past week, 4 out of 6 people I asked actually thought the MP3 sample was the original composition.

For the power user, there is also an interface for use with a Hardware Encoder from Telos. This gives you the option, with the addition of the hardware for a “Nominal Price” to encode direct to a file in real time. I personally have no problem with encoding from a file. See the Telos site for more about the Audio Active Hardware Encoder.

It’s not a question of whether MP3 will affect your radio station in some way, shape, or form; it’s when. It may behoove you to pick up a mouse and investigate it for yourself. I encourage each of you to visit the test page of audio examples I have created using the Audio Active Production Studio Pro. www.VoiceOverAustin.com/mp3test.html. On it you will find a few files encoded at various bit rates. You will need to first download the audio active player and install it. The Audio Active web address is: www.audioactive.com.

This is a wonderful time to be doing what we do. Technology has and continues to change our jobs as producers, voice types, and even the average Joe or Josie Shmoe. No doubt, MP3 is or will be a part of your life. My advice is to use the best software available to share your talents with the station across town, or around the world.

Telos’ Audio Active Production Studio, Lite or Pro is a must. Don’t be cheap, just get it. You won’t be sorry.

March 01, 1998 12732
By Jerry Vigil In this day of digital workstations with plug-ins and built-in effects, one might think that the external effects box is becoming a thing of the past. If the only effects you need are basic reverbs, delays, pitch...
Read More...
© 1988 - 2023 Radio And Production, LLC
Go to Top