Orville comes with 150 different kinds of patchable processors, called modules. Some are very simple delays or single filter stages; some can be as complex as rich reverbs or stereo pitch shifters; and others are mixers, on-screen knobs, and math processes to tie the whole thing together. You can use as many of each module as you want, until you run out of DSP horsepower. Then you can put more of them into the other engine.

Connecting modules is almost as simple as it was in my ancient studio. There are three different ways. These are nothing new—they apply both to the 4000 series and Orville, though Orville has made them slightly easier. But they are so central to getting the most out of either machine that I have to cover them here.

You can create presets in an LCD-screen graphic patch bay. This was awkward on the DSP-4000, and hasn’t gotten any easier. Creating or modifying a preset on the LCD screen should be considered an emergency procedure, for use only when you don’t have a computer handy.

But Orville is a lot more computer-friendly than its earlier cousins. It connects directly to a Windows machine using a simple serial cable. No MIDI adapter is necessary. Once connected, you can run Eventide’s Vsigfile application, available free at their website. (Vsigfile will also let you connect serially to Orville from a Mac, if you have a current version of Virtual PC. And it can be used with DSP-4000s via MIDI.) 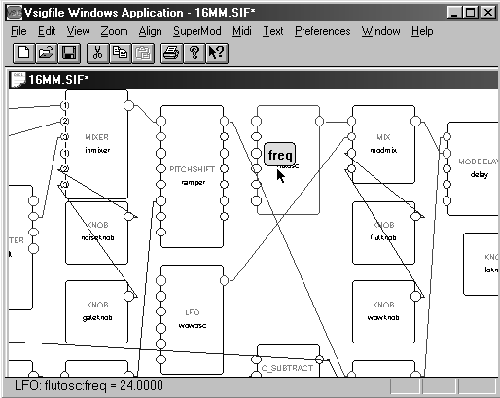 Vsigfile gives you two ways to string modules together. If you prefer a graphic environment, you can select modules from a list and pop them onto a screen that represents Orville’s audio environment. Then you can move them around with a mouse until they’re in the right order for signal flow, and drag between them to connect their inputs and outputs. Wires are somewhat color coded to let you sort control signals from audio. If you click on a module, you can set its operating parameters. In figure 2, I’ve just clicked on an oscillator—which I called flutosc, because it generates flutter in a movie projector simulator—so I could set it to 24 Hertz.

Personally, I’m not really a fan of Vsigfile’s graphic environment (if I could understand complex graphics, I’d be an art director). It works as advertised, and it’s the preferred programming method recommended in Eventide’s manuals. But I prefer their text-based environment. 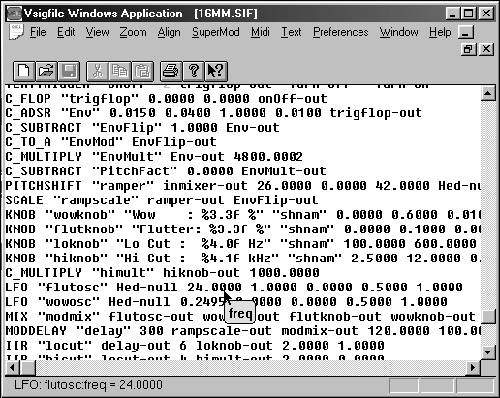 Figure 3 shows the same value being edited in Vsigfile as text. The capitalized word at the start of each line is a module’s operating function. The next word, in quotes, is a name I’ve assigned based on what the module does in that circuit. Then all the values and connections are laid out, where I can see and edit them. I can roll over a value to see what it does, or click on it to assign a value or route it from the output of another module. When I wire two modules together this way, the name of the one supplying the signal appears as the appropriate value in the other (see “modmix” two lines below the pointer). It may seem confusing at first glance, but after a few minutes it becomes an intuitive way to grasp and control a complex signal flow.

Visigfile includes syntax and connection checking in both environments. If a value doesn’t fall within a reasonable range, or a module’s output hasn’t been connected to anything, the program lets you know.

Once you’ve connected modules together, a key command sends the preset to Orville. This takes about five seconds, and then you can pass a signal through and hear if it’s functioning the way you want. If not, you can change any of the values or connections in Vsigfile and try again. Or temporarily wire just part of the preset to Orville’s inputs and outputs for debugging. The process is so interactive that programming becomes a game. I wish I had more time to spend doing it.

Eventide also supplies a similar utility for updating Orville’s operating system and modules through the same serial cable. This is a considerable improvement over previous processors, which required you to open the unit and exchange PROMs. During the time I’ve had Orville, system updates were free and distributed over the Web. But this was also pre-release and beta-testing time. I don’t know what their policy on updates will be in the future. I do know that in 25 years of owning their products, they’ve always given good customer service.

It’s a lot of processor, with a big price tag. Street price at the early dealers I’ve checked was slightly more than $5100. That’s not out of line compared to other powerful units, and it’s a bargain when you consider how many simultaneous processing paths Orville supplies.

And it’s not perfect. A few more buttons would have made a big difference in speed of use, and would have made operation easier for the novice. The sampler memory is fine, but it’s strictly short-term: a SCSI interface for a hard drive, or even the ability to use laptop PC-card hard drives in the existing slot, would make the system a lot more useful.

But Orville does what it promises. It gives you a lot of control and excellent-sounding effects, and does it in a way that should satisfy all your multi-channel and high bit-rate production needs for the next half dozen years. (Which, come to think of it, is how long I’ve had a DSP4000... and this is the first time anything’s surpassed it.)

The initials stand for Digital Signal Processor, which is kind of a no-brainer since it’s a processor that handles digital signals. But the DSP chips inside Orville are independent microcomputers, designed specifically for high-speed processing of repetitive signals like digital audio or video. They’re controlled by a master CPU chip, like the one in a desktop computer, but the CPU doesn’t normally handle audio. It takes care of slower chores like interpreting the knob movements and painting the LCD screen.

DSP is all around us. Dedicated audio workstations use DSP chips to handle mixing and effects processing much faster than their software-only editing systems can. That’s one of the reasons they’re more expensive. Users of DAWs like Orban’s Audicy or full-blown ProTools systems frequently install additional DSP cards to give them the equivalent of more rack-mount effects. Other radio equipment taking advantage of DSP includes ISDN codecs like Zephyr, and most modern transmitter processors.

But DSP finds a much bigger application in fields like medical imaging, TV and movie special effects, teleconferencing, and hush-hush military spy satellites. These markets keep driving chip capability up and costs down... making possible even more powerful gadgets for us in the studio.