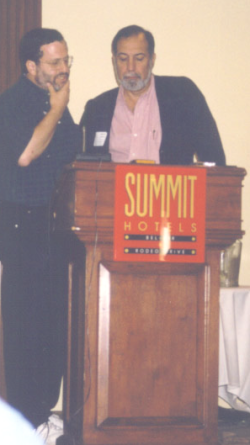 As you look at Dan O’Day, you wonder what makes him a super hero among radio production personnel.  Is it his persistent rapping on salespeople?  His bias against bad productions everywhere?  Perhaps it’s something more basic, like the fact that he has a trusty sidekick named “Robin,” and that he has a quest, one that drives him to teach us how to motivate the listeners in our own little Gothams to respond to radio.

He readily admits that Robin, his assistant, had to keep reminding him to write his seminars for the Third Annual Radio Creative and Production Summit.  “It’s only four weeks away Dan.” “Just two weeks, Dan.” Then it was, “Dan., the Summit’s this weekend,” which led him to be just like us.  Getting the message produced quickly, getting it produced well, drawing upon your inner experiences to craft messages that people relate to.

Dick Orkin, the seminar co-host, also admits that he draws upon his own experiences—or weaknesses, actually—to write the slashingly funny productions created by his Radio Ranch.  Over the course of the two day seminar at the Summit Hotel Bel Air in Los Angeles, Orkin introduced us to his family, members of his creative team, and his own memories.  He explained how these were the building blocks to effective storytelling.  He implored us to come to a conversation with our memories, and more importantly, the inner personalities that we show to no one else.  Once we get past the facade and are able to laugh at ourselves, then we have found the universal experiences that when coupled to marketing strategies produce award winning spots.

The hotel conference room was, at times, as chilly as an autograph avoiding celebrity on the neighboring Sunset strip.  Only the carpeting and a few technical glitches were annoying.  “We had a choice of carpeting, and we chose this” quipped O’Day as a Jack Benny-faced Dick Orkin looked on with an amused smirk.  These two guys kept close to 70 participants in stitches as they presented topics such as Storytelling: The Path to Powerful Radio Images; Hypnotic Advertising; The Architecture of Comedy; and Spots Before Your Eyes: Writing, Directing, and Producing the Commercial.

One of the most surprising seminars was “Hypnotic Advertising” presented by O’Day.  Through such devices as Mega Warhead Sour Candies, Hotel Card Keys, and the mental picture of Monica Lewinsky nude, O’Day brought home the point that it’s associations that people remember, not facts. And the more senses that you can involve, the better.  He also let us in on the secrets of hypnosis (O’Day actually has a background in psychology) and how to phrase your copywriting in such a way that it paces and leads a listener into the spot, much the same way a hypnotist relaxes a subject.

Here are some examples: “I wonder if you could remember a client who felt like they had to put every piece of information in a spot?” With that phrase, your mind begins searching for that prime example.  That is known as a conversational postulate. On the surface it’s just a harmless conversational little question, but to your mind, it’s a command that starts it spinning to find an answer.  Starting off a spot with a conversational postulate could get your listener’s minds working for you.

Here’s another example: What if I gave you this list: Hat, car, popcorn, hand, cake, and bathrobe. Read the list again. I bet you can’t figure out what they have in common!

The fact of the matter is that no matter what I write in this sentence, you really won’t care, because your mind is probably so preoccupied with trying to figure out what the preceding six things have in common.

(The answer, by the way, is nothing. They have nothing in common.)

Your mind, however, had to find some association, SOMETHING, to tie them together.  That is the power of the subconscious, and it can work in your radio spots. Associations are strong.  People remember them, and they remember your clients when you can associate a universal experience with them.

After the luncheon schmoozefest, Dick Orkin and his Creative Director, Christine Coyle, took us through a typical Radio Ranch client Q&A session, followed by a brainstorming example that they call “Dialogue with Experience.” The session showed how to get a grasp of the “better reality” that your client’s business is in.

For instance, instead of having a club that plays ‘80s music, the better reality is that it’s a place where the girls can hang without the guys, or it’s where a person can recapture his youth or find a soulmate.  From these examples, numerous universal experiences of bad dates were suggested by the seminar participants.

From that, Orkin and Coyle kicked off their Dialogue with Experience technique.  They, along with the crowd, actually talked out and simultaneously wrote a spot using painful memories turned comedic.  The next day, Coyle brought along an actress, who, along with Dick Orkin, acted out the spot while Coyle provided professional directing commentary.

The seminars were rounded out with Bobby Ocean, who provided a basic explanation of promo production. His demonstration of one standard piece of copy, twisted and turned into nine outstanding promos was pretty amazing.  O’Day and Orkin’s “Critique-a-Spot-a-Thon” was an hour and a half of listening to participants spots while they provided constructive feedback.  In all, they were surprised at the overall quality of the productions.  They said it was a notch up from previous years.  Noting that a lot of the seminar participants were repeats, it was understandable.  There is a lot to learn, and apply, that will make any production person better.

I could end there, but my mind won’t let me.  It’s saying to me that I have to bring closure to this tale of the Radio Creative and Production Seminar.  Closure, being one of the points that O’Day discussed during “Hypnotic Advertising.” Maybe I could write something that would tie back into the super hero comment in the first sentence.  Maybe I could just say what Dan did, “Closure is the natural tendency of the human mind to impose order upon chaos.” After all, isn’t that why we attend these seminars anyway?  Seeking for ways to establish order in chaotic production studios?  I for one am feeling a little more orderly already.

March 01, 1998 12711
By Jerry Vigil In this day of digital workstations with plug-ins and built-in effects, one might think that the external effects box is becoming a thing of the past. If the only effects you need are basic reverbs, delays, pitch...
Read More...
© 1988 - 2023 Radio And Production, LLC
Go to Top