Q It Up: What libraries do you use for sound effects? - Part 1

We had a lot of great responses to this month’s question, so many, we’re going to give you half of them this month and the other half next month. There are lots of excellent tips and suggestions here, so soak ‘em up and look for Part 2 next month!

Q It Up: We've already asked you about production music libraries for imaging and commercials. Now, tell us what libraries you use for sound effects. (We're talking about natural sound effects such as doorbells, dog barks, car horns, etc., NOT effects such as zaps, lasers, and such.) What are your likes and dislikes (if any) about the library or libraries? Also, what other sources of sound effects do you use? Do you make your own, for example? If you have a trick or two for making or using sound effects, please share with us. Do you know of some great Internet sites for sound effects? What are the addresses?

Steve Martin <steve.martin[at}bbc.co.uk>;, BBC Radio Scotland: In the BBC we have a set of 100 CDs produced using background sounds captured by BBC sound recordists over the last 40 years. They're great for atmospheres and a range of internal and external sounds from squeaky gates to markets in Istanbul, but the BBC tradition is to produce “spot effects” live.

Doorbells, cups of tea, chopping vegetables, chair scrapes, vacuum cleaners…all these sounds are created for real in the studio. If this sounds like English eccentricity to you, just think, it means you can match precisely the perspective of the sounds with the actor’s movement. The actors can see the sounds being produced and adapt their performances in time. And of course, it's great fun too. You can produce an entire birth scene using a bowl of water and a sponge, and medieval beheadings are best created with a cabbage falling into a wicker basket.

By the way, hot water sounds totally different from cold. Try pouring boiling water from a kettle into a coffee mug and then do the same with cold. Listen to the two recordings and hear the difference!

Andrew Frame <aframe[at}dynamagic .com>; Andrew Frame Custom Production, Fort Myers, Florida: I worked for a station in the 1980s that would not supply us with decent music or SFX for spots, so I bought an Electra records three CD set from a local record store that has served me faithfully for over a decade. This led to picking up CDs at garage sales, in department stores, etc., because later GMs would obtain a music library for production, but forget the SFX library! And I (like everyone else) have established an intimate relationship with the Hollywood Edge demo disc. Latest additions include Media General's Sirocco package, and I'm constantly scouring the alt.binaries.sounds newsgroups for new material. I've almost completed one CD of nothing but audio files culled from the Usenet.

Rolling your own effects, or "Foley," is standard fare. Punching a phone book to get a body block sound, breaking wood, glass, peeing in a trash can, whatever. In fact, my resume has "Foley" and "ADR" on it--two film terms that explain a lot of what any of us do in a production room.

Some of the really big SFX packages are stupendous for a/v work, but for radio, they're overkill. For example, people have a perception of what a car crash sounds like. Brakes screech, lots of banging, glass breaking, etc.--what we "think" the sound should sound like. (Thank you Saturday morning TV cartoons SFX masters!) In reality, a car crash sounds a lot like a baseball bat on a metal trash can. But perception and reality sometimes are different. So a simple, perceivable SFX library is my favorite for radio work.

And, a big happy thought...SFX libraries are buy-outs! 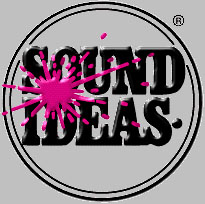 Ron Harper <rhvohvo[at}ix9.ix. netcom.com>, Ron Harper Voiceovers/WWMG, Charlotte, NC: We use Sound Ideas 1000, 2000, 4000, 5000 and 6000, plus Hanna Barbera and some TM Century libraries that came with music libraries. When I can, I like to Foley effects. I had to have the sound of a sack of Purina Dog Chow hitting the ground, you know that "chunk" sound a big sack makes. So I went into the station kitchen and got a packet of coffee, and dropped it into a bowl of Corn Flakes, close miked. It was perfect.

Johnny George <HOTAUDIO [at}aol.com>, WFMS/WGLD/WGRL, Indianapolis, Indiana: We have the Sound Ideas library series 1000, 2000, and 6000. This is probably the most used library around. And one of the best things about this library is their Search Data-Base PC Software available free with their demo. The database certainly is better than their index book, which has very difficult logic to its indexing. After a while, this is a library where you know all the sounds. We also have some old CDPL SFX CDs from TM Century we use in a pinch. So, if I have to look around for SFX that I particularly need, I will look everywhere.

On the net, a good source is a Sound Ring member. Once you find one, every other member is tied by links. One is Sound America (soundamerica.com). Also, Daily Wav (www.dailywav.com). These, additionally, have movie, cartoon, and TV drops.

However, with a DAT player in hand, the best SFX are still obtained by going to get it yourself. If I'm going to take the effort to do this, I usually try to get a bunch of other ones at the same time. Nothing beats the "real thing."

Other tricks of the trade can be had while manipulating speed, pitch, reversal, etc. of current SFX. As an example, a car horn sped up and time constrained can sound like a VW bug horn. Or a cartoon tire skid slowed down about 60% can sound like some dog scooting his rear end across the carpet. (So that's what it sounds like!) LOL.

Jim "Jimbo" Kipping <jimbo[at} VoiceOverAustin.com>, Voice-Over Austin/PowerHaus Productions/Director of Production, LBJS, Austin, Texas: I am amazed that many, many "producers" feel the need to place a music bed under a rip and read and call it radio creative. Come on folks, let's face it; our industry was born from actors who did commercials live! And guess what else they did live? Yup…Foley SFX! Give up the need to just have music and live a little. Picture the music as the marinade that flavors the spot, the sound effects as the broth, and your copy the steak! Make it sizzle and sell it damn it!

Okay, first. Sound Ideas is probably the best we use here at LBJS in Austin. With 5 stations to produce for, we have one of the most extensive libraries in town, from the 2000, 3000, and 6000 series, also the WB and HB SFX as well. These are always crisp and dependable. I have even developed a FileMaker Pro template that has all the SFX in it and is really easy to find things for any spot. I also use the first Hollywood edge libraries, PE and TE series. I use this one at the home studio (Voice/Over-Austin) as well as Digiffects. These are good starter libraries if you don't have a huge budget to blow on elements. Also, run down to your local Target, Best Buy, or record store. You would be surprised the clean stuff people are selling there too! It's great to fill in the gaps. Hey, you just may need 1,000 different roller coasters or farting noises someday! Buy em! You'd be surprised! We also have the Network SFX libraries on hand. Although abundant in content, I don't find it very useful because most of the elements sound dated. They don't jump out at you and grab you by the b.. bal.... bald spot on the top of your head. But hey, if it's part of the music package and their a buy out…get ‘em.

Lastly, I am in the process of recording my own SFX for not only personal use, but for a library for sale. One thing that I can never find is a clean copy of western SFX--things to do with cowboys such as rodeos, horses, bulls, sounds of the western night, the ambiance of a true midway complete with obnoxious tires spinning on the zipper ride, and un-bathed toothless carnies heckling me about the pretty girl who needs a stuffed smoky bear that's been carted 4,000 miles in 3 weeks. Hey, this is DQ country! Let's sound like it. I am actually in the process of recording these to press on CD for my use, and I am more than happy to let you all use some. Bookmark www.VoiceOverAustin.com and check it out over the coming months if you want some, or need that stuff. I will be putting up some wacky stuff, bits, spots, etc. as well. Web construction is now commencing so be patient.

Great questions! Please keep up the great work! Hopefully your questions will ignite some passion that may be dwindling deep within all of us because of the wonderful world of "consolidation." Face it folks, you better be good at what you do, because there will be plenty of out of work disc-jockeys in the new order of radio. Stay competitive and make it sincerely sound great!

Craig Jackman <craigj[at}canada.com>;, Audio Production and Sound Design, CHEZ-FM, Ottawa, Ontario, Canada: When I first started at CHEZ 13 years ago, we had the original Sound Ideas series on reel. There was a zero tone at the start of each reel, and then you would search through by time--a complete pain in the ass to use. So we used SFX that my predecessor, Jon Crowe, had compiled over the years. Before he left, I dubbed over some of the best of those, and we still use them on occasion. Later we got the Sound Ideas series 1000 and series 2000 on CD. That has been our backbone of SFX for the past 10 years. The Sound Ideas stuff is fine, but there are better packages on the market.

We've also collected the odd bit of SFX over the years: Sound Ideas SFX on CD-ROM, that Hollywood Edge sampler that everyone got free, and Sound Ideas Warner Brothers cartoon SFX. After years of our asking and due to recent client complaints about SFX in spots, the management finally broke down and bought Sound Ideas series 6000 (The General).

Where we can get the time, we will make our own SFX, particularly if the CD SFX sound cruddy. As we don't have anything portable except for cassettes (yuck!), we only Foley SFX in the voice booth--better mics, better sound proofing, cleaner mic chain. We'll Foley anything from coins in a vending machine to office atmosphere (long mic cables), to bicycle gears and chain noise. Generally, I don't pull SFX off the Net because there is no computer in the studio. I have to pull from the Net to floppy on one computer, then from that floppy to cassette on another computer, then from cassette to DAT or ADAT in my studio. After the signal loss, it really isn't worth the effort.

After using these SFX over the years, my only tip would be to never use just one. I always layer at least two SFX to get the sound I'm looking for.