If there’s one thing you’ll take away from this month’s spotlighted production, it’s the word phenomenal, not just because the spot is good, but because the word itself is built up syllable by syllable at three different points in the spot.  It really drives the idea of the Pleasure Dome nightclub’s “Phenomenal Fridays” into your brain. 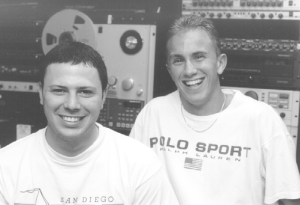 This production is also unique because there are two producers, Joe Edwards and Chad Rufer. It’s common for producers at Advantage Productions to share the responsibility for producing a large imaging package for a station. It was natural then, that two producers teamed up on this month’s spotlighted production. Chad says it helps to have two sets of ideas as a production takes shape. One producer may get too close to the details of a production and lose sight of the big picture. A second set of ears can lend some perspective. Joe produced the first half of the spot and Chad finished it. You can hear their team-effort on The Cassette and read here about how it was produced.

And as an aside, this column is a special one for me to write because Chad started as an intern at my stations before graduating high school and heading for sunnier climates. As you’ll hear, he’s developed some good production chops. And as an intern, at least we could afford him!

Chad and Joe produced this on Pro Tools 2.5. They used 8 tracks. Tracks 1 and 2 are used for voice. Track 2 runs through a high pass filter with a roll off at 475 Hz. Tracks 3 and 4 are a pair, but are not grouped together. This allows Chad and Joe to slide one track against the other for phasing and delay effects. Tracks 5 and 6 are grouped as a stereo pair as are tracks 7 and 8.

Voice talent is the incomparable David Lee. He’s been voicing spots for the Pleasure Dome for several years.  His voice tracks are delivered to Advantage on DAT.

Here’s what happens in the beds in the opening seconds. First is a bit of 1k tone panned left. Then is an effect in the right ear from A/V Deli’s Next FX. The guitar chords are from a band whose CD didn’t make it past the discard pile.

Lee breaks up the word “phenomenal” in his read. It starts “phen” then becomes “phenom” then “phenomenal.” When Lee first says the full word, Joe copied it to track 2, then pitch shifted the copy down slightly using the Yamaha SPX-90 “Symphonic” patch.

The second time Lee says “phe-nomenal,” Joe has moved it to track 2 to run it through the high pass filter. Underneath is a snippet of a bed from a metal/techno band whose name he’s forgotten. He also stuttered the last syllable of “phenomenal” to make it match the music. An explosion from a science fiction disc from the Sound Ideas library closes this phrase.

The next music bed is another bed he took from an obscure CD. Lee’s voice starts in mono on track 1, then jumps to 3 and 4 so they can pan the syllables left and right, then returns to 1. On the word “Friday,” Joe stuttered the “r” to stretch the word and keep it on the beat.

At this point, Chad took over the primary producer responsibilities. There are two overlapping music beds here. The second begins just as the word “Friday” ends. The beats matched perfectly, making the transition seamless. Both are from the A/V deli package “Boom.”

Chad repeated the word “Pleasure” by copying it to 2. The phrase “Pleasure Dome’s many rooms” is on two tracks with one offset a few milliseconds to give a phasing effect. A double static effect was copied immediately after itself. The original was panned hard right; the copy was panned hard left. The bass-heavy bed is from A/V Deli’s “Boom.”

The phrase “Fluid Lounge” becomes fluid by running it through the “Vibrato” preset on the SPX-90, then adding some panning. The phrase starts in the left channel on track 3, then pans across the field as Chad faded the left channel down and faded the right channel up on track 4. This pan was done with Pro Tools fade function. The word “move” is repeated twice. The first is on track 1; the second is on track 2 with the filter. The next phrase to be filtered is “female impersonators.” (This club sounds like it has it all!) “El Goya” showroom was put on tracks 3 and 4 with one offset from the other to spread the image. “Café Cohiba” is also run through the filter on Track 2.

For the second go-around of “Phenomenal,” the voice track jumps all over. Each syllable is also beat-matched to the music bed. “Phen” starts on track 1. The next “phen” is copied to 3, which is panned left. “Phenom” is on 1. “Phen” jumps to 4, which is panned right. “Phenomenal” is back to 1. “Pleasure-Dome” is filtered on track 2. “Friday’s” is pitch shifted down a third through the SPX-90. After that phrase finishes bouncing around, the bed switches to another track from “Boom.” The touch-tones are from Advantage Production’s own “Ear Candy” package. The modem effects are from A/V Deli’s Speed Trax.

The transition effect and second bed are from A/V Deli’s Next FX. The third set of “phenomenal” syllables bounces between straight voice on 1 and filtered voice on 2 and are again beat-matched. Chad copied “Friday” to track 2 and offset it slightly from track 1. On the phrase “the club of a new millenium” Chad stuttered “the” to match a stutter in the music. And they got lucky with the bed ending cold at the same time as the v/o.

This is a great piece that makes judicious use of effects and isn’t overcrowded by verbiage. Drop in The Cassette and give it a listen.

March 01, 1995 45172
by Jerry Vigil Forget your every notion of what a "mixer" is. The rapid pace of technology is changing that forever. Some high dollar "recording studio" consoles have already realized the power of combining computer technology...
Read More...
© 1988 - 2023 Radio And Production, LLC
Go to Top