It’s work enough imaging one station. Johnny George is imaging three in Indianapolis at country stations WFMS and WGRL and oldies WGLD. This guy is wearing so many imaging hats, he has a hat rack in his studio. This month Producer’s VU spotlights a Web site promo for WGRL, The Bear. Plug in The Cassette so you can hear the promo and read here about how Johnny produced it. 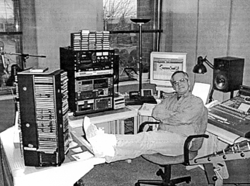 Johnny’s working with the Spectral Prismatica/XP workstation with a CS 10 controller to give him real faders. The Spectral runs on a 90 MHz PC with 32 megs of RAM and two 4-gigabyte SCSI drives. His board is a Yamaha 02R. Between the effects built into the 02R and the Spectral, he says he doesn’t have much need for his 3500 Ultra-Harmonizer. He monitors through Genelec 1031A’s.

Before heading for the studio, Johnny faxes the script to voice guy Zeus. Johnny indicates on the script which lines he will be filtering to help get the correct inflection. He sets up the production in his head, but then says, “We are free to break that blueprint at any point in the creative process.” His standard set up has tracks 1 through 8 paired up as four stereo pairs, and tracks 9 through 12 are for mono v/o. For this promo, he only used ten tracks.

At the open, Johnny added a reverb to Zeus’ list of techno-terms. He ran Zeus’ reel through the “Reverse Gate” effect from his 02R board as he recorded onto tracks 7 and 8 of the Spectral.

Underneath this list is a drone from the FirstCom Sound Designer Work Parts CD. Johnny also ran this through the Reverse Gate on the O2R. The rising accent is from Total Access from Techsonics. Johnny used just the first part of the effect. It first falls on tracks 3 and 4, then alternates between that pair and 5 and 6 as Zeus recites items on the list. The data tones are from the ProMusic PowerPak library. These are copied and used in numerous places throughout the promo. The music and effects stop cold as Zeus says, “sounds like gobbledygook to me.”

The next section kicks off with a piece from Radio Today’s Gold Mine. He recorded it into the Spectral and then reversed it. The music bed is from ProMusic. That bed is cut cold by crumpling paper that Johnny foley’d using his RE-20. On Zeus’ line, “Boy is that a cliché,” Johnny again used a reverb program from his O2R, “Reverb Room 2,” to add some presence. He then copied the ProMusic bed to start the next phrase. The stereo spread on the Web site address is achieved by copying the v/o to a stereo pair and then offsetting one channel a few milliseconds from the other. Johnny pulled the “Get Smart” drop-in about the “detailed military manual” from the Web. (Johnny shares some of his favorite sites for drop-ins at the end of this article.)

In the middle of the promo, Johnny switches to a female v/o. Johnny pressed the WGRL Promotions Director, Shelly, into service because of a miscue in Zeus’ v/o. This new voice also gave him a chance to have a conversation between the two that he hadn’t originally written. This is an example of “breaking the blueprint” when needed. Johnny applied some EQ to Zeus’ voice here, boosting between 1k and 3k and rolling off below 100 Hz.

The car start is from the Hollywood Edge (don’t we all have that free demo disk?). The drop-in, “How’s that grab ya?” is one Johnny’s had on file so long, he’s forgotten the source, but thinks it may have come from one of his Web surfing trips. The static burst was from an effects disc Johnny can’t recall. He cut the effect up and bounced it from side to side. The shout, “Don’t touch the dial” was lifted from a Bruce Springsteen CD. The “bam” accent that cuts it off is from a Brown Bag disk. The growl effect is a signature that Johnny’s predecessor, Matt Rawlings, created. It’s actually a growl from Zeus that Matt pitch shifted. He put different versions in the left and right channels. Johnny has several versions of the growl for different applications.

Johnny was careful to include instructions on his copy to Zeus so that he would read the Internet address properly. The station is usually identified as “Ninety three point nine (growl fx) The Bear.” Johnny had to make sure he read the address as “Ninety three nine (growl fx) the Bear dot com.” The additional word “point” can make a big difference in an Internet address.

On mixdown, Johnny uses the CS10 to do a close-to-finished mix. He’ll then listen to that mix and use the mouse to fine tune levels. The Spectral returns to the 02R on a stereo pair.

If you’re looking for some new drop-ins, check out these sound sites on the Web that Johnny passed along: www.soundamerica.com; www.dailywav.com; and www.sassybeth. com. Plan on taking some time to explore these sites; they are deep!

Next month Producer’s VU checks in with imaging director Zack for Channel Z in Cincinatti.