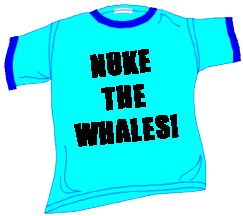 A few years ago, a T-shirt company that regularly advertised in rock and roll magazines came up with the slogan that I used as the title of this article. The copy in the ad read, “Keep ‘em guessing with this shirt.” For me, that’s a perfect summation of what the road to creativity is all about.“Keep ‘em guessing.” Make them wonder if what they’re hearing is really a commercial or promotion, or if it’s...well, what the hell is it, anyway? The road to creativity does have its share of confusion, but as long as the objective is clear, the creativity will be enjoyed by the audience. It’s the process of keeping that road clear that we shall discuss in today’s rambling sermon. Be prepared to be pissed off by some of what I am about to say, because I’m about to attack one of the foundational philosophies that we creative types tend to adhere to. This will not be for the squeamish, but if you keep an open mind about it, you might discover the same method I did in eliminating the biggest killer of creativity that exists in our universe.

Stress is the biggest killer, not only in life, but also in creativity. Stress is the reason why so many of the best creative types wind up leaving the business, either willingly or in straight jackets. And one of the biggest causes of stress is the confusion about what creativity is, and the how, and why, we are able to create. And I am about to settle one of those stress-causing pieces of confusion, once and for all—the stress that comes from those moments when we are not recognized for being the “geniuses” we are.

Oh yes, we all suffer from it. Sure, I know it’s egotistical to think this way of yourself, and I know that in a proper society you’re not supposed to think so highly of yourself. But, the truth of the matter is, we’re all a bunch of egomaniacs who are desperately trying to please people in an effort to be referred to as “the genius of the station.” Come on, no one’s looking right now except you. Admit it; you think this way a lot, don’t you? Of course you do. Every single creative person in the entire universe feels this way. I used to wholeheartedly believe in this “truism,” and it’s killing us. It’s one of the biggest reasons why I had so much trouble getting my career going when I was getting started. Likewise, I see it ruining and destroying the careers of many competent and talented people in this industry every day, because it sets up a ridiculous level of competence that we try to aspire to, one that’s hardly ever achievable.

Plus, by having this attitude, we inevitably begin to think of ourselves as artistes, not beholden to the business side of this business. I know that some of us do have the mistaken impression that what we create is “art,” and that somehow, money corrupts our “art.” That’s a crock of caca! First off, we don’t make “art;” we make toilet cleaner commercials. We promote an obnoxious entertainment industry that exploits everything it comes in contact with, which sets up the highly confusing situation when we have to face the fact that our “art,” which we religiously believe is not beholden to money, nonetheless is used to make money for other people. Sure, this may sound stupid here, in print, but the fact is, I talk to people in the business every day who firmly believe this to be true in their own minds. The real truth is, the concept of “art” died when a painting of sunflowers sold for 14 million dollars, which is about 13.999 million more than what it costs to grow sunflowers in your own backyard. So what if someone named “Vincent” who lived a tragic, stupid life painted it? People live tragic and stupid lives every day. What difference does it make?

The point to all this (and I do have one) is, creativity is great, but it is not “art.” For us, in this industry, to even consider what we do as being comparable to some kind of “godlike” talent is one of the biggest causes of stress when our job requirements makes us realize that we are exploiting our “art.” Sure, there are very few people who can do what we do, but there are also very few people who can do a proper heli-arc welding job on two pieces of aluminum. I’m sorry, but this is nothing more than being competent in your industry, and not “art.” It is a matter of educating yourself in your chosen field and having daily experience combined with an interest in learning how to improve your skills. I’ve said it before, and I’ll say it again—how can any industry that creates promotional work for toilet bowl cleaners consider itself to be an “art?”

Creativity is a skill that can be learned. Creativity is not a mystical power you were born with. You may show, at an early stage, some aptitude toward a particular area, but no one ever comes out of the crib composing music. Even Mozart, child prodigy that he was, nonetheless had to be taught by his father, a highly respected and talented musician and composer in his day. The word genius comes from people who only view the finished product and don’t know the story of the years of education, practice, frustration, and experience that each artist puts into his or her work. Mozart’s very first compositions are hardly every played. Why? Because they’re exactly that, the first compositions of someone just trying to see what he could do. And while they indicate a great ability, they’re not the stuff of brilliance that his later compositions were, when he became more experienced and talented.

I’ll repeat it again: creativity is a skill, not a God-given miraculous ability that you were born with. I know that I’m going to have arguments about this because many people show aptitudes early in life toward certain talents and occupations that can be made into careers later on. I will admit that, even in my case, it was an early love of cartoons and radio voices and my interest in trying to emulate those voices that eventually lead me to my current career. But, I can also point to numerous people who shared the same early interests as I did, who went into entirely unrelated fields (such as my youngest brother who’s a far better vocal mimic than I am and works in car sales with absolutely no interest in pursuing his vocal talent for a career). Similarly, there are plenty of people out there who had no interest in radio or showbiz whatsoever and are now some of the biggest names in our business, proving once again that talent is a skill.

Actually, most of the great artists saw themselves as highly skilled craftsmen who achieved an excellent level of proficiency. The “art” bullcrap came from their promoters and the buyers and sellers of the product. Does this cheapen what they’ve achieved? Certainly not. I’m just pointing out how different some of the views on work will be, depending on who you talk to. Okay, for a quick sidebar debate, I’ll of course mention that every artist, from Leonardo Da Vinci, to Beethoven and beyond, all demanded that they be referred to and treated as highly talented artists. But that was due not so much by a need to fulfill their egos as it was to at least get some recognition for their efforts from their patrons, the aristocracy, who tended to classify them as servants no more important than the stablehands. There has always been a conflict between those who produce and those who exploit the product. This conflict still exists today, even long after the aristocratic days of servitude have vanished. It now lives among those who make a living out of exploiting art.

The classic example is the theory that Shakespeare could never have written the plays and sonnets attributed to him, and that some other writer of the period (the most popular candidate being Christopher Marlowe, another famous writer of Shakespeare’s time) had to have been the real author. This “theory” is only believed to be true by scholars and the university professors (who exploit the art by demanding that the only way to appreciate and understand it is to learn their viewpoints on the art) mostly on the grounds that, since Shakespeare didn’t go to a university or have much of an education beyond whatever the basic one was back then, he couldn’t have been smart enough to write that well.

But, if you read Lawrence Olivier’s book, On Acting, you’ll see that, in the world of the theater (the very people who live and breathe Shakespeare’s works), they fully know that no one else but Shakespeare could have written those plays, because no one else had the theatrical training that Shakespeare had, and only someone with a background as diverse in the theater as Shakespeare’s could have been able to understand the full means of staging plays such as he wrote. There is no doubt among the people who have performed the plays and sonnets over the centuries that Shakespeare was the one and only true author. It’s only among the intelligentsia who cannot accept the notion that you don’t need a college education to have creative brilliance, that you’ll find any disagreement.

The key then, in developing, maintaining, and even improving your talent and creativity, and how you can benefit from it while getting rid of the stress that causes the most road blocks in your career, is to understand your role in the great system of making money, understanding how to use your role to your advantage and make your own success. In other words, DON’T BE AN IDIOT ABOUT YOUR CAREER! Your success will only be dictated by how much effort you put into it. I may not be telling you anything you don’t already know, but I find that it helps to be reminded of the basics once in a while. I’ve also found that by ignoring the idea that I’m somehow an artiste because of what I create, I have a much more level headed and common sense attitude toward my job. I don’t have anywhere near the stress I used to because I don’t claim what I do to be worth anything more than it’s intended purpose: to promote something. Therefore, any criticism or problem that comes up is not a direct attack upon my “art,” but just something that needs to be fixed. It makes everything about this business a lot easier to deal with.

To sum it up in a nice, short, memorable phrase, your ego is your problem, and as long as you remain clearheaded about what you do and not take it or yourself too seriously, you’ll do quite well with whatever career choices you make.

Many years ago, Stan Freberg incorporated his talent for making commercials into his own business known as Freberg Ltd. As a company motto, he chose a Latin phrase (which he coined), Ars Gratia Piccune. Translated it means, “art for money’s sake.” That’s us in a nutshell, baby. Now, get out there and enjoy yourself, dammit!