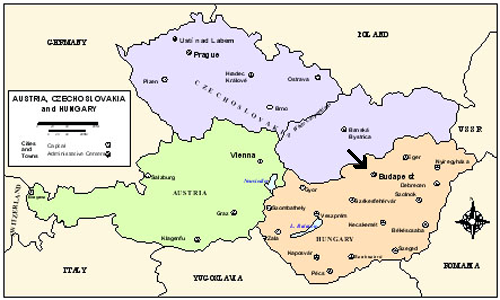 The incredible international radio road trip innocently started with a phone call and just two questions. I picked up my line when it rang, and Emmis VP of Programming Rick Cummings was on the other end asking the questions: “Do you have a valid passport?” and “How would you like to fly to Budapest?” Little did I know that by answering “yes,” I was about to have one of the most enjoyable, most educational, most memorable, and most stress-filled radio experiences of my career. Sit back and follow along as I try to do justice to a tale of twelve days in Budapest launching a new national Hungarian radio network.

The whole reason for the trip was Emmis’ recent purchase of a national radio license in Hungary. The government had given them just three months to build a facility, research a format, hire a staff, and have a signal on the air. I was there to put together the station imaging and train staff. That meant liner scripts, directing voice talent, producing sweepers and promos, and loading them into the station’s hard drives all within the one week left until sign on.

The journey began with a quick flight from Phoenix to LAX. I joined Rick Cummings in Los Angeles, and fifteen hours later, completely jet lagged with a nine-hour time difference, we were in Hungary. With a bit of a rough start, the airline lost one of my two bags. I was a little concerned because the bag that was missing was filled with all my production CDs. The good news was that it arrived a couple of days later intact. After filling out a stack of claims forms, we were finally off to downtown Budapest. It’s a city in a former communist country filled with beautiful old-world architecture, warm and friendly people...and an emerging and competitive private radio broadcasting business.

The next morning as I arrived at the station, I met the staff. We had less than a week to launch this station, and we needed everyone’s cooperation to make it happen. I was wondering how a group of Americans with our foreign ideas about radio would be received. After all, I’ve worked for a few stations over the years where a new owner came in and the old staff resented it and fought them tooth and nail...and that was without any language or cultural barriers. It quickly became obvious that it was not going to be a problem here. I can’t tell you how great it was to be surrounded by people focused on a common goal…to launch a winning radio station. These were all good solid radio people. They knew their market. They listened to our ideas. On one hand, they did not just sit back and blindly follow our suggestions. On the other hand, they did not fight every suggestion with arguments why we couldn’t do it that way in their country. They made their own suggestions and created a hybrid of successful stateside radio blended with the history and culture of Hungary. To give you some specific examples, I was working on the liner script and wanted to use the phrase “music and fun.” “Music” translates well, but several people on staff were concerned that the Hungarian word for “fun” didn’t make a good literal translation. “Fun” in Hungary doesn’t mean smiles and laughter, but carries a cheap and tacky connotation. After years of communist rule, they didn’t have a lot of opportunities to use a word that means fun. The copy was rewritten to give the perception of fun in a way Hungarians could relate to.

The facilities were great (and all digital). They were going to be installing some gear I had not worked with before, so I was a little concerned with a learning curve. The only other problem was the guts of the production studio were delayed passing through Hungarian customs. We lost a few days on that one, but at least we were able to track the local voice talent. We recorded straight to DAT through a Digitech tube preamp with great A/D converters that ran into a TC Electronics Finalizer. In no time, I was tweaking away until we locked onto a real solid processing for the voice talent. The tube preamp gave the mic a warmer sound and one of the features of the Finalizer is multi-band compression. You can hit the lows, mids, and highs at different levels of compression. These two units made for an awesome and flexible mic chain.

The tracking session was a blast. The voice talent was the hottest voice over talent in Budapest. He was a pleasure to work with. Like the really good professional voice people I’ve been lucky enough to work with in the States, he was no prima donna and took direction like a champ. However, I didn’t speak a word of Hungarian, and he didn’t speak very much English. So, I worked with translations of the script and had Agnes, the Marketing Director, who is Hungarian but speaks better English than I do, stand next to me the entire time. The cultural difference really became apparent when we worked on recording the slogan line. It was, “The best hits, day and night.” Day and night in Hungarian is “ejjel nappal.” I wanted the last syllable of “nappal” to hit heavy and deep. The voice talent kept trying to follow my direction, but never quite got it. After many takes and a lengthy discussion, it was then I discovered that in Hungary, you always emphasize the first syllable...no exceptions.

Everyone was working full speed to make the sign on. In fact, several staffers were coming down with the flu from lack of sleep. They were all troopers and showed up for work. That night, the engineers worked around the clock to install the Orban Audicy that had just cleared customs. I work with ProTools on a day-to-day basis, so I was a little worried about how quickly I could get up and running with the Audicy. It turned out to be a non-issue. The workstation is very intuitive. I spent that entire day listening to Hungarian voice tracks finding and loading the best takes. After a long day in the studio, I woke up several times during the night hearing little snippets of Hungarian radio slogan lines in my head over and over again.

The third day we were in a groove. I had a good handle on what each phrase meant and could recognize it by hearing it. I went to work producing the station’s sweepers and promos for a kick-off that was a day away. The production studio was still under construction, but the engineering staff was great getting the basics up as soon as they could. The board was a Studer digital console with solid radio features. It was equipped with digital EQ and a great audio routing system. The mastering DATs were the Otari DTR-8S decks. There were also a couple of Denon CD players and a Digitech Studio 4 effects generator. The tough part was that the remotes had not been wired to anything. I spent a lot of time hitting the record button on the Orban, running across the room, and starting a CD. It worked out, but it added time to the production process. It also gave me a lot of exercise. I lost seven pounds on this trip.

The morning of the launch, I woke up to find that I had caught the same flu bug that was tearing through the station. My throat was raw, and I could barely breathe. I felt like I had been hit by a truck. But we got everything produced...just in time for the launch. We went right up to the wire. I was still mixing down as someone else was loading cuts into the station’s hard drive. The sign-on was at midnight, and I felt the same excitement buzzing through the station that I’ve felt at every launch I’ve been a part of in the States. The energy level is international. Whether it’s the USA or middle Europe, there is the tension and the buzz of a baby’s birth. It went great, and even in Budapest, everybody knows how to do a high five.

The next day I felt sicker than a dog...but we made it. Hungary had a new national radio station. It was all worth it. I learned a lot on this trip: Fifteen hours in an airplane each way is a long time. Hungary doesn’t have Theraflu. Coffee is served in cups the size of shot glasses, and McDonald’s tastes the same everywhere in the world. Another interesting fact I picked up still has me amazed. Throughout much of Europe, radio spots are sold and priced by the second. A sixty-second spot is six times the cost of a ten-second ad. There is no large penalty for buying short spots. You don’t hear many, if any, sixty-second spots. In a three-minute stop set you could hear twenty sponsors! After all the years of unit limits on stations where I had been a Production Director, I had a hard time conceiving the concept.

The trip home was uneventful except for the six-hour weather delay at LAX when all I wanted was to get back to Arizona and sleep off the jet lag. All in all, it was an incredible experience. Would I do it again? Well, it looks like it. I’m scheduled to go back next month to do some staff training. Wish me luck.

October 01, 2009 6026
by Steve Cunningham This month’s product review involves yet another happy accident. I subscribe to a number of voiceover mailing lists, and last month one of them advertised a deal to list members on a product that would turn...
Read More...
© 1988 - 2022 Radio And Production, LLC
Go to Top