Tascam’s new TM-D8000 Digital Mixer is designed for production and incorporates a multitude of faders and a full function transport controller. The mixer provides a variety of digital inputs (TDIF, AES/EBU, S/PDIF), snapshot and dynamic automation, digital AUX sends and returns, an integrated meter bridge, assignable digital dynamics and a “control pod” with LCD display for rapid access to numerous system parameters. Basic configuration of the console is 40 mono inputs and 6 stereo inputs, each with their own fader, and assignable to any of the 8 busses, stereo mix, or directly to the digital tape send of the corresponding channel. There are 24 dedicated digital tape sends and returns via TDIF-1. You’ll also find 16 analog inputs individually switchable between the XLR mic pre-amps or balanced TRS line inputs, and each of these channels provide analog insert points and phantom power. Dynamic processing includes gate, compression, and expansion using 8 internal processors. (213) 726-0303, www.tascam.com.

Audix introduces the OM-2 dynamic microphone, the latest in their OM Series. With affordability in mind ($149), the OM-2 features a spring-steel grill ball and an inner pop filter with added “warmth” in the lower mid-bass and a slight boost in the mid-range. Frequency response is 50Hz-16kHz. (800) 966-8261, www.audixusa.com. 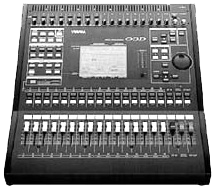 Yamaha announces the 03DVEK, a software upgrade for the popular 03D mixer which makes the 03D compatible with video edit controllers through the ESAM II protocol ($999). There’s also new Version 2.0 software for the 02R digital mixer. The upgrade ROM chip ($200) adds features that include 6-channel discrete surround sound capabilities on every input, digital aux sends available via Yamaha digital I/O cards, input cross-patching, and the ability to process output busses through dynamics, EQ, and routing matrixes. And Yamaha’s new DSP Factory plants the company firmly in the computer-based digital recording/editing arena. The DSP Factory is the umbrella for a series of components designed to bring digital recording and mixing to a personal computer. The DS2416 audio card ($999) is the first in the series and provides 24-channel digital mixing, two effects processors, plus sixteen tracks of hard disk recording with up to 32-bit resolution. Two cards can be linked together to create a larger system. The AX44 Audio Expansion Unit ($299) provides four analog inputs and ouputs plus a headphone jack and installs into a drive bay on the computer. In the works is the AX16-AT ($299), which will provide sixteen digital inputs and outputs in the ADAT format. (714) 522-9011, www.yamaha.com.

If you haven’t acquired a CD burner for your studio yet, you at least know it’s “down the road.” And the next step is a high-speed CD burner. ICS (Intelligent Computer Solutions) unveils the CD-MASSter Elite, capable of copying eight 650-MB CR-Rs in just 18 minutes without the need for a PC. The stand-alone unit contains eight Matsushita 4x CD-R drives and is expandable to four towers with 32 drives. System prices start at $4,900. (818) 885-7500, fax (818) 885-6769, www.ics-iq.com.

Everybody…let’s merger! Broadcast Electronics announced it has acquired Auditronics, Inc., manufacturer of on-air consoles for radio. This is the first acquisition for BE since its purchase by Hoak Corporation last summer.

AV Deli makes its debut on the Internet. Check out the new site at www.avdeli.com for demo requests, online ordering, and more.

And congratulations to Paul Turner Productions on adding a new studio to their family! Toys include the Otari Status 32-track console, Pro Tools, Quested monitors, ISDN, and a ton of bells and whistles. (800) 736-3878.

Addressing the shortage of broadcast engineers that has hit the broadcast industry, the Society of Broadcast Engineers announced it will institute a program to educate young people about technical career opportunities in the industry. Using a combination of educational information and contact with engineers in the field (like your engineer), the SBE hopes to increase the number of young people who wish to continue their education after high school and eventually become broadcast engineers. SBE President, Ed Miller explained that, “In recent years, many broadcast engineers have left the industry for jobs in related fields where many times money was better and hours shorter and more predictable.” (Doesn’t it seem odd to relieve the shortage by recruiting high school kids rather than fixing the problem, which Mr. Miller stated himself, lousy money and lousy hours? Poor kids.)

Need an entertainer? The Entertainers’ Network is a UK based database of over 5000 entertainers from all over the UK with a few listings from the US. Log into www.entertainers.net to get the telephone numbers of all types of entertainers including clowns, brass bands, jugglers, etc.. For more info, contact Marc P Summers at (44) 1634 243 852.