It’s Zack. No last name, just Zack. Like Madonna, Cher, Bono, Oprah. And like those mono-monikered entertainers, Zack is one of the best in his field. This month, Producer’s VU dissects a liner he produced to set up new music on Channel Z, a format he describes as a “CHR/Modern AC/Alternative leaning hybrid.” You’ll hear how Zack used reversed audio and stereo pairs separated and offset from one another to achieve some terrific effects. You can hear the piece on The Cassette and read here about what went into it. In fact, there is so much backward audio, we’ve included a backward version on The Cassette to help you better hear all the pieces. If that’s not enough and you really want to break this piece down, try listening to just the left channel and then just the right channel. 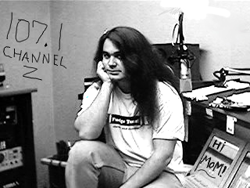 This production consists of three pieces: an in, a bed for the new artist name, and an out. It’s only 12 seconds long, but there is a lot in it. Most of the effects were created from short bits from Dream Theater’s “Awake” CD and from the Dave Mathews Band song “Ants Marching.” These hits are processed, reversed, squeezed, teased, stretched, bent, wrung out, and hung out to dry. With Zack’s help, let’s take the piece apart and find out what kinds of tricks are up his sleeve.

Zack produced this piece on ProTools 4.0 after only three weeks on the system. He says it was a chance for him to “see what the system could do.” Male voice is Sandy Thomas. For all but one word (“now”), Zack put Sandy’s voice onto three tracks. One was panned center. The other two tracks were offset from each other a few milliseconds to get a big stereo spread. All three were run through a high pass filter.

Female voice is Traer Scott. Zack had worked with Traer at Q105 in Raleigh and liked her work so much he now uses her at Channel Z. He doubled her voice by recording it onto two tracks. One track has the high end boosted slightly. On the other, he rolls off the low end, boosts the highs and runs it through a plug-in called “Procrastinator 24,” a plug in from the Audio Suite bundle. This provides a delay and reverb on this track.

The pulsating drums at the open came from the cut “6 O’Clock” from the Dream Theater CD. He recorded this to a stereo track in ProTools, then nudged one channel ahead of the other by a few milliseconds to widen the stereo field. He then reversed the audio.

Under the phrase, “experience the future” is an organ bed from Dream Theater. Zack simply had his CD player parked in pause to get this loop. The snare is part of this bed. Zack again offset the left channel from the right to widen the stereo field, then reversed the audio. The snare hit that closes it, just before the word “now,” is from the Dave Mathews Band. Yep, it’s reversed, too.

Under “this is the new music revolution” is another rapidly repeated kick drum that came from pausing the CD player. A machine gun-type drum closes the first section. Zack created this by highlighting just the attack of the drum hit and using ProTool’s “Duplicate” function to loop it. It was run through a reverb plug-in to provide a smooth tail out.

The middle section is the donut where the band name will be inserted. Barely under it is a bed derived from “Erotomania,” another cut from Dream Theater. Zack reversed the audio. (No surprise, eh?) It runs about eight seconds to provide plenty of room for a long band name. When the band name is inserted, he’ll move the ending up to tighten the donut. Over this bed he drops in Traer’s v/o. The reverb from the Procrastinator 24 helps tie the middle portion to the last portion.

Opening the third portion is a generic snare that Zack stretched using the ProTools Time Compress/Expand. This created some artifacts, but after reversing the stretched audio, he liked the result. He also says he ran it through the Sonic Decimator or the Ring Modulator from the Waves ProTools plug in. He can’t remember which.

At the end you’ll hear another snare that has been recorded in on a stereo pair. He then reversed one channel. While one channel is playing normally, the other is playing backwards.

Now plug in The Cassette and listen closely to Zack’s work. You’ll hear that Zack learned quite a bit about ProTools in three weeks. If you’d like to reach Zack, e-mail or call (513) 852-1708.

Next month, Producer’s VU picks the brain of Rob Walker from Alice@104.1 in St. Louis.

July 01, 2003 6319
by Steve Cunningham Left to my own devices for this month’s product review, I found myself compelled to look at a software plug-in whose sole purpose is to twist, mangle and otherwise brutalize audio. While this plug includes...
Read More...
© 1988 - 2023 Radio And Production, LLC
Go to Top