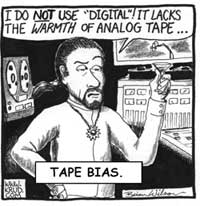 WaveFrame has introduced a hardware upgrade for the WaveFrame/StudioFrame workstations. The R8-Plus board ($995) provides increased audio channel playback capacity, up to eight audio channels, over a single SCSI bus, doubling the capacity of previous versions. Also new from WaveFrame is the 408 Plus, a new digital audio workstation that offers seamless compatibility with Tascam’s MMR-8 digital recorder. The unit provides playback of 8 audio tracks from a single SCSI bus, identical to the format used in the MMR-8. This allows easy transfer of media between the two units. (818) 843-7004, fax (818) 842-8945.

Orban announced that Radio Free Asia is acquiring 15 Audicy DAWs to add to the 21 they already have. (Wow!) Using the new Version 2.0 software’s networking capabilities, the 36 Audicy workstations will be linked in a global network encompassing RFA’s Washington, DC headquarters and its five Asian bureaus.(510) 351-3500, fax (510) 351-0500, www.orban.com.

FPC, Inc., a subsidiary of Kodak, has introduced a line of high-density digital audio cartridges. The Magneto Optical media is marketed under the Kodak Recording Products label. The Kodak MO cartridges are available in 5.2, 2.6, 1.3, and 1.2 gigabyte configurations. www.kodak .com.

Panasonic has some new toys including a series of cordless phones that take advantage of the new 2.4GHz band recently allocated for personal communications. The new technology reportedly provides a maximum range of up to twenty times that of the company’s regular 43/49MHz phones, and approaching eight times the range of their current 900MHz models. And it’s time to get rid of that micro-cassette recorder and make room for the digital version. The RR-DR60 ($99.95) accepts up to 99 memos totaling up to sixty minutes of recording time! You get voice activated recording, date/time stamping with LCD display, an Intro-Scan feature to play just a few seconds of each memo, Slow and Fast play modes for transcription or fast scans, and more in a 1/2-inch thick package about the size of a credit card. (800) 211-7262, www.panasonic.com.

Need some copies of that CD? Check out the CD-2701 CD–R Copier from MediaFORM. Simply stack your CDs, up to a spindle of 50, with your master on top, and press copy. The CD-2701 automatically starts the  procedure of reading, verifying the master, and then copying onto blanks. In verification mode, the CD-2701 checks to see whether the CD is a master or a blank. Thanks to this technology, the CD-2701 gives you the capability of Job Streaming which allows for several master CDs to be copied simply by stacking the masters on top of the desired number of blanks. (800) 220-1215, www. mediaform.com.

In today’s takeover news…Pacific Research & Engineering has signed a letter of intent to acquire Graham-Patten Systems, Inc., a Grass Valley, California based manufacturer of digital audio mixers for the video editing environment. (760) 438-3911.

PreSonus introduces the new M80 microphone preamplifier ($1,899). This 8-channel unit features a special "Idss" control on each channel that is used to adjust the harmonics of the signal from absolutely pure (no harmonics) to simulation of the effects of tape saturation and tube "warmth." The back panel is fully loaded with XLR balanced input and output connectors and TRS line inputs via Neutrik combo connectors. Each channel is equipped with separate send and return jacks for inserting dynamics processors. Mix output connectors are XLR for balanced signals and TRS for line level signals. A 2-channel version of the M80, the MP20, is available for $599. Also new from PreSonus is the ACP88 8-Channel Compressor/Gate ($999) which features eight channels of compression, limiting, and noise gating for a variety of applications. Each channel’s compressor features control of threshold, ratio (1:1-20:1), attack, release, hard/soft knee, auto/manual attack and release curves, and gain. Each gate features threshold, attack, release, and switchable gate range. The ACP88 features servo balanced or unbalanced inputs and floating balanced or unbalanced outputs. For every channel, there is a side chain jack for spectral compression and a separate sidechain jack for gate processing. Each channel boasts full gain reduction metering, compression threshold indication, and gate open/close. (504) 344-7887, www.presonus.com.

Emanuel (Manny) Kallins has joined FirstCom as Music Supervisor/Composer for the recently acquired Gotham Music Library. Manny began producing and composing titles for FirstCom in 1995 then eventually started his own library, Gotham Music Library, which FirstCom then acquired in 1997. (972) 446-8742, fax (972) 242-6526.

Top Format Productions of The Netherlands has released their new demo, Ratings Up—Tomorrow’s Jingles for Today’s Radio. Ten new jingle packages are presented for the CHR, AC, and Hot AC formats, and the demo has a CD ROM track which contains all lyric sheets for the packages presented. (31) 23-5-320-640, (31) 23-5-315-473, www. topformat.nl.

A late congratulations to RAPster Pat White, WIL/WRTH, St. Louis, and his wife Dee on the birth of their new baby girl, Abbie Elaine White, born February 18. Pat says he wants her to be a production wiz, but mama wants a GM wiz!

July 01, 2009 6041
by Steve Cunningham I’ve done a great deal more location recording lately, including a number of interviews that are destined for podcasts. My go-to recorder has been the Compact-Flash-based Fostex FR-2LE (see the November 2007...
Read More...
© 1988 - 2023 Radio And Production, LLC
Go to Top