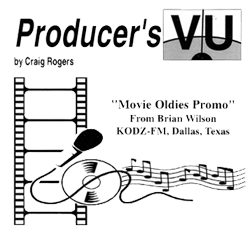 If you want to revive an oldie, just feature it in a movie. "Pretty Woman,” "Unchained Melody" and "Do You Love Me" are just a few songs given new life after being featured in a hot movie. Brian Wilson was working at KODZ/Dallas in 1992 when this phenomenon inspired a great image promo for the station. Brian will tell you here how he put this promo together. Then you can hear the finished product on The Cassette.

One thing this promo will point out is how far technology has advanced in just five years. Brian produced this on an Otari MX-70 analog 8-track. At the time, most guys using analog 8-tracks were the guys who had it all. Now, technology allows even the smallest market stations to have dozens of tracks on a PC for the price of a few reels of 1/2" tape.

In addition to the items you'll read about, Brian also had in the KODZ studio a PR&E ABX-28 control board, Eventide H3000B Harmonizer, Otari MX5050 4-track, and Studer CD player.

Voice talent is JJ McKay, a jock at KODZ. Brian recorded him to reel on his Otari MX-12 2-track. He miked him with a Shure SM5B. He applied some light compression at about 2:1 through his Gemini Easy Rider compressor/limiter.

Track assignments on the 8-track had the voice-over and drop-ins alternating between tracks 1 and 2. These were mono tracks panned center. Tracks 3 through 8 were used in stereo pairs for the music. Brian started out by laying down the first music track, the familiar theme to Entertainment Tonight. Then he recorded JJ's v/o onto track 1 to the point of the first drop-in.

A standard technique when working with analog would be to record the drop-in to cart or reel so that it could be cued tightly and then fired at the appropriate point. Brian had a better way that allowed him to keep his cues even tighter. Using his Lexicon 480-L reverb, he could sample up to six seconds of mono audio. He could then trim the start and end points to get exactly the piece he wanted. Then as he rolled the 8-track, he would fire the sample from the Lexicon at the appropriate spot. Brian says, "I was using digital editing before I even realized it.”

Using the Lexicon, Brian layed in the first drop-in from Wayne's World. Then he continued with JJ's next phrase, then back to the Lexicon to fine-tune the next drop-in. He continued this alternation until he had the "set-up" assembled with JJ's voice, plus three drop ins from Wayne's World and one from MacCauley Culkin in Home Alone. Then he recorded in the second music bed, Unchained Melody.

Brian used the same technique for the drops from Pretty Woman and Dirty Dancing. In both these instances, Brian eliminated several phrases from the middle to get the phrasing and timing he wanted. With the Back to the Future drop-ins, he took pieces from different scenes and edited together an exchange that didn't even take place in the movie! The line, "It's an oldie where I come from" is delivered by Michael J. Fox before he begins to play Johnny B. Goode. The line, "That was very interesting music" is delivered by Lea Thompson after the song. In the promo however, it sounds as if Lea's line prompts Michael's response.

Next, you hear Robin Williams introducing a Martha and the Vandella's song. Both the Williams voice and the song were lifted as is from the soundtrack of Good Morning, Vietnam.

The promo closes (or at least seems to) with a KODZ jingle. But then comes one last drop that Brian culled from a rental movie. After the previews on the video, there was a full screen graphic with the words and a voice that came on saying, "And now, our feature presentation.” (This is the part you usually fast-forward through to get to the movie.) Since the promo was always last in a stop set and went directly into music, Brian thought this was a perfect way to carry the movies and music theme right into the next song.

This false-ending technique was a favorite of Brian's. One of its best uses was in a promo where scientists were conducting research on listeners to see which oldies they liked and which they didn't. An oldie from the KODZ playlist would elicit a response of "cool, cool" from a computer voice. Awful oldies would elicit a response of "Not cool, not cool" from the computer. Since the promo was last in the set, a song would run out of the jingle that seemingly closed the promo. The catch was that there was seven seconds of dead air after the jingle. After the music had established, the computer voice would come back on saying, "cool, cool".

On the mixdown to cart, Brian ran all eight tracks through the Gemini Easy Rider compressor limiter to help even out levels.

Plug in The Cassette and give Brian's promo a listen. You can also enjoy Brian's other contribution to RAP, the "Radio KRUD" cartoon. If you'd like to e-mail him, the address is klif-bw@ IX.netcom.com.

Producer's VU takes next month off for the RAP Awards on The Cassette. In the April issue, we'll pick up with a promo for a "Double X Weekend" from Steve Stone of WXDX in Pittsburgh.