Producer’s VU has profiled a good amount of what I call “whiz-bang” production. These are the pieces designed to cut through the clutter and grab your attention by being louder, faster or weirder. This month we trade the sledgehammer for a feather that should tickle your ears. Jeff Schmidt, Creative Director for KFOG in San Francisco, floats an X-Files inspired promo with subtle tweaks and tricks into this month’s spotlight. Listen carefully to his promo for the KFOG Attitude Adjustment Hour on The Cassette and read here about how he worked his magic. 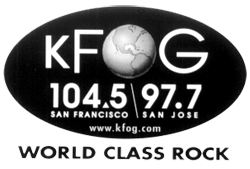 Jeff plays the part of the Conspiracy Nut. (For sake of brevity, we’ll just call him “The Nut”.) He ad-libbed the character’s lines while recording into Pro Tools. He then took the best lines, wrote them out on a legal pad and used this as a rough script to recut the character’s lines. The performance you hear is all one take, including some of the ambient effects such as Jeff rubbing his hands together and his shirt rustling.

The male agent was played by Don Daniels, the PD for KFOG’s sister station. Katherine Kowen, a KFOG sales rep, played the female agent. Jeff recorded each of them separately since he couldn’t schedule them at the same time. He used a Neumann U87 from about 1 foot away. Jeff wanted this distance as it provided a more realistic sound to the dialogue instead of the typical “announcer-swallowing-the-mic.” The mic was run through an Orban 674A EQ to roll off below 150 Hz, then through an Alesis 3060 compressor with a 3:1 ratio with mild attack and a long release. When both agents were recorded, Jeff edited the conversation together.

A large part of the beauty of this production is the realism of the space Jeff has created. It started with a small room reverb from a TC Electronics plug-in. Jeff put the same reverb on two separate return busses. One was used for the agents. This reverb was set and left since the agents stay in one place. At the end, when the agents lean in closely to each other, he moved them to another track without reverb so they would sound closer to the listener.

The second reverb was used for The Nut. Jeff manipulated the parameters of this reverb extensively throughout The Nut’s diatribe. Jeff says the manipulation of the reverb, “actually makes (The Nut) move through space, depending on where he is in relation to the listener.” Jeff played with the wet/dry mix to make it sound as if The Nut were walking forward and back. He played with the pans to move The Nut from side to side. He also played with the low decay. As the character walks away, he added more low decay. As he came forward, he dropped off the low decay. The Pro Tools automation helped immensely here.

As Jeff finalized the reverb movements for The Nut, he still wasn’t satisfied with the realism of the scene. Adding footsteps helped complete the picture of The Nut’s movements around the room. He first tried foley-ing footsteps in the parking garage. These didn’t sound as good as the effects he found on a Hollywood Edge disc. He did however, manage to get a squeak from turning on his heel that he used when The Nut reached the far left and turned to come back to the right.

A delay of 18 ms on The Nut’s footsteps adds to the illusion of a large, cavernous room. Jeff says, “It’s one of those things you don’t really notice, but if you took it out of there you would.” He used a delay plug-in on a third send for this effect. The agents also have footsteps as they enter the scene. Jeff chose a set of male and female footsteps from the Hollywood Edge. These are mono tracks linked together on tracks 11 and 12. They are sent to the same delay he used for the agent’s voices.

The space in which the scene takes place is set right at the beginning with the opening of a large mechanical door or gateway. Jeff created this from seven sounds from an industrial sfx disc in the LucasFilm Sounds library. First, on the left is a large metal door closing. Jeff edited out the hinge squeak to leave just the “boom.” Another large door effect, panned center, follows that by just a few milliseconds. A reverb for these two sounds is panned right to set the size of the room. A rising tone is synced up with the beginning of the second door hit. Then come two metal scrapes, panned left and right. A small servo is also thrown in. A series of beeps came from a Hollywood Edge medical sound effects disc. He edited those very closely together so that they were almost one tone, then pitch shifted them up. All this occurs in about a second! This was all produced in a separate production, then imported into the main production.

To add even more depth to the picture, Jeff added room tone underneath the entire scene. For this he chose a lab ambience from Hollywood Edge.

To paint a picture of the female agent taking notes, Jeff foley’d paper rustling and panned that track slightly to the right. He miked this the same way he miked the agents.

There are three cuts of music in the piece. They come from the Who Did That Music? and KPM libraries. One opens the piece and sets the tone. The second, more ominous bed begins as The Nut is saying “I know what it is, man, it’s a cover-up.” The third slightly more intense bed begins as The Nut says, “Yeah, X-files, man….” You’ll have to listen closely. These beds blend together very well. Jeff edited them to match hits in the music with copy points or pauses.

Now, close your eyes as you listen to this cut on The Cassette and see if you don’t find yourself in that room, eavesdropping, wondering if the truth about the Attitude Adjustment Hour is really “out there.” If you’d like to reach Jeff, call (415) 995-6886 or e-mail jeffschmidt @mail.radio-online.com.

June 01, 2013 5282
by Steve Cunningham After a few issues wherein we’ve dealt with various forms of Internet esoterica, this month we’ll get back to the basics of assembling a serviceable audio editing station. Our specific goal this month is to...
Read More...
© 1988 - 2023 Radio And Production, LLC
Go to Top