In The Studio: Pro Tools and HUI at WMMR

When he was a young boy growing up in Cleveland, Ohio, Steve Lushbaugh would lie awake at night with a radio under his pillow, pulling in stations from across the lower States and Canada, dreaming of a career in radio.  Phase One of dream fulfillment came when he landed a late night jock spot in his hometown. Lushbaugh has spent most of the 1990s in his current position at WMMR in Philadelphia, where he produces some original music and parody tracks and prepares all of the promo and ID packages for the station. On the day we spoke to him Lushbaugh had just completed recording and mixing a comedy bit for the Morning Show, a highly successful program featuring Mark Davis and fellow jock

At Lushbaugh’s urging, WMMR got into the digital audio workstation game early on. The year was 1989—practically the Ice Age in DAW terms, when the station purchased an Otari PD 464. “The 464 was basically just one step above a multitrack tape recorder. You purchased the system in increments of 4 channels. We initially had an 8-track system and went on to 12 tracks before we moved past the technology. It let you edit individual tracks and slip them around, but that was about it.”

Otari eventually stopped supporting the PD 464, but experience with this DAW gave Lushbaugh a taste for how effective digital technology could be in radio work. He was particularly intrigued by its archiving and storage potential. Two years ago Lushbaugh decided he had to work on DigiDesign’s Pro Tools, a Macintosh based work station, and so he bought a basic system for his computer at home. Pro Tools can run native—using the computer’s CPU for all processing functions in tandem with DigiDesign software, providing the user has a DigiDesign Audiomedia card. This card slots into the Mac, and is used to convert analog audio into digital form, or pass material that has already been converted into a digital signal directly into the system. This basic Pro Tools set up does not allow the user to perform all of the tasks that a fully loaded, card based Pro Tools system can handle, but Lushbaugh used it to ramp up the learning curve, and he was able to convince the powers that be at WMMR to purchase a fully blown system for the station.

WMMR currently runs Pro Tools 4.1.1, with 24-bit audio in the system. Isn’t 24-bit audio a “bit” of overkill in the narrow bandwidth world of radio. “Yes, but we get so much out of Pro Tools, and going to 24-bit audio was not that expensive.” The station recently purchased Mackie Design’s HUI, an eight fader hardware controller. “The HUI is the missing piece of the Pro Tools package. It’s almost essential. I think Pro Tools should be bundled with the HUI!” 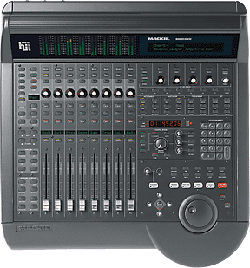 For several years Lushbaugh worked with composer/comedian Pat Godwin, who held a staff composing job at WMMR. “When John De Bella hosted the morning show (Howard Stern fans might remember his crusade to knock De Bella off the air, a mission he eventually fulfilled), Pat and I would produce songs on a regular basis. Some were parodies, others original, but all were topical. There were times when we’d be in the studio producing a track at 6 a.m., knowing that it had to be on the air the following hour. Other times we’d take the better part of a day producing a track for the following day’s show.”

Lushbaugh recently played all of the instruments and sang vocals on a parody of the Pearl Jam composition “Wish List,” tracking into Mark of The Unicorn’s sequencing program Digital Performer. “The drums and keyboard parts are sequenced into Performer. It plays back my performance which gets recorded into Pro Tools. Vocals are overdubbed.”

Working with a mouse is not practical for many recording applications, although all of the elements of the Pro Tools package can be accessed this way. “Still, there’s nothing like having 8 faders at your finger tips, and that’s what the HUI gives you. It speeds things up by a factor of between 2 and 4. I still use the mouse to fine tune things, but most of the time it’s HUI all the way. Please point out that the faders are very fast in their response time, and that there’s no zipper noise at all. I have a Kensington Turbo mouse track ball on my Mac. I thought it was easy to use, but the scrubber that’s part of the HUI is even better.”

Staying in the moment, we asked Lushbaugh to describe his most recent assignment. “Well, just this morning we did a piece for the Morning Show. The jocks have a recurring segment called The Minute Matinee, which is sort of a little radio theater piece. This one involved recording five different actors individually. One had to sound as if he was speaking through a PA speaker, another needed ambient noise behind him, and we had to sprinkle effects throughout the track.”

Like many Pro Tools users, Lushbaugh relies heavily on the WAVES plug-in package. Plug-in architecture is a critical aspect of Pro-Tools success. DigiDesign provides authoring code to outside vendors, many of whom have designed reverb, compression and equalization packages, and more unique applications like the Auto-Tune software from Antares which corrects pitch on individual notes. These plug-ins are one of the reasons why Pro Tools dominates the DAW market.

Once the basic tracks were recorded Lushbaugh pulled out his sound effects libraries, included discs from Sound Ideas and Electra sound effects, and dropped in door slams and location sounds, and set to work making the individual voices work with each other as if they had been recorded together. “It’s easier, especially given the time pressures we’re under, to record the voice-overs as separate passes, and make the ensemble come together in Pro Tools by nudging tracks around.”

“The HUI was great for executing the final mixdown on this piece. There are subtleties to the process—people walking away and going off mic for example. With a mouse you could only handle one track at a time, but with the HUI you can grab three or four faders and adjust volumes for the entire ensemble. If I missed a pass I just went back and grabbed the fader again. You don’t have to worry about making a mistake.”

Project management is critical in radio promo work, and the archiving aspect of Pro Tools is extremely valuable, according to Steve Lushbaugh. “I can make multiple copies of a project, and edit each in different ways, storing everything within one folder. Let me give you an example.”

“I recently did a package of promos for the 4th of July programs we aired, and I needed to create a bunch of IDs that all referred to that weekend. I got sound bites from the Internet, CDs, and records, and threw them all into one Pro Tools project. Then, by using the “Save Project As” feature, I cut all this material up in different ways, and labeled each project separately. This way of working is a lifesaver! All my material is organized, and at my fingertips at all times.”

WMMR is one of four radio stations in the Philadelphia area owned by Lushbaugh’s bosses, and though he set each of them up with Pro Tools systems and is available to answer questions, they are all independent. “All of the equipment decisions are made individually.” Lushbaugh is currently pondering if it’s time to recommend that WMMR eliminate its costly, and quite effective Pacific Recorders console.

“The HUI has a monitor section, which I don’t use, because I have a 28-input console.  I would love to get rid of the board and mix entirely within Pro Tools, saving the acreage that the board takes up.  I currently underuse the board, using only the mic, CD, and Pro Tools pots. I could take my CD player directly into Pro Tools using the HUI, which also has 2 mic pres. That’s not enough for record work but it’s fine for radio.  Once I hooked up all my sources into Pro Tools I could output to my speakers directly from the HUI.”