AMS Neve announces new hardware and software enhancements for its Libra Live digital broadcast production console and also several new features for the 55 Series analog console. Both will be on display at NAB98 in Las Vegas this month. (1282) 457011, fax (1282) 417282 (head office in Lancs, England). 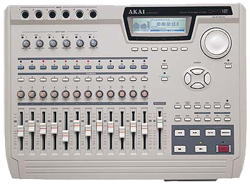 Roland’s new VS-840 Digital Studio Workstation builds on the technology of the VS-880 and brings the price down to under $1,400. The VS-840 combines 8 tracks of digital audio recording, digital mixing and editing, 64 virtual tracks, built-in studio-quality effects, and Zip storage. Other features include 999 levels of Undo and an optional SCSI port. Connections are made via five 1/4-inch audio inputs (one of which is a dedicated guitar input), stereo RCA-type master outputs, two RCA-type auxiliary/monitor sends, MIDI I/O, and coaxial/optical digital outputs. The VS-840 can record up to four tracks of audio simultaneously and play back up to eight of its 64 “Virtual Tracks” at any given time. (213) 685-5141, www.rolandus.com. 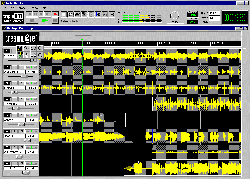 The TDAT16 from CreamWare is a new 16-channel DAW ($2,198) for the PC. The TDAT16 hardware offers two ADAT interfaces on one PCI board. Each of the optical ports can be switched between S/PDIF (2-channel) and ADAT (8-channel) formats. The TDAT16 software is an enhanced version of the tripleDAT software, a four-channel version. New functions include multi-channel record, mixing, and routing facilities. TripleDAT now provides the user with up to 16 channels of recording while playing back on up to 16 output channels. TDAT16 is suited for use with digital mixing consoles or in an Alesis ADAT environment. To interface with the analog world, CreamWare offers their A16 ($1,298) external converter unit. The A16 translates two ADAT optical ins and outs to 16 analog ins and 16 analog outs. (604) 527-9924, fax (604) 527-9934, www.creamware.com.

GMI Media Group is on the net with a new Web site at www.gmimedia.com. The site features online demos of their CD libraries using RealNetwork’s Real Audio 5.0. Also, besides giving RAP Members 20% off on their Lazer Impact Plus and Powerdisc libraries, GMI Media is now also offering the SFX Toolkit free to RAP Members (a $39 value) with the purchase of one or both of the other CD’s!

Chateau Brazil announces the upcoming release of RockLogos, a 3-CD library of 3 to 8 second “microscores, attacks, and breakers” and 9 to 25 second promo scores. Over 700 cuts in classic rock, hard rock, and “acoustic/electric rock ‘n blues” styles. (414) 632-8611.

Congrats to RAP Member and columnist Andy Capp who exits KELO Radio to take on a position as writer/producer/director for Nichols Media, a commercial production company in Sioux Falls, South Dakota. Andy’s email address has reverted back to his old AOL address at acappdj@aol.com.

The Digital Content Creation Conference and Expo announced support from major industry leaders who will be exhibiting new digital technologies at the show December 2-4 in Los Angeles. Supporters include Compaq, IBM, Digital Equipment Corp., MetaCreations, and others. (714) 513-8651, fax (714) 513-8612, www.dcc wexpo.com.

CD Radio is relocating from Washington, DC to New York. CD Radio was one of two successful bidders for a  license to launch a national satellite-to-car broadcasting system which will use two satellites to broadcast to motorists in the U.S.. The new headquarters will house 50 different radio stations. The first satellite is scheduled for launch in August of next year. (212) 312-3523.

May 01, 1997 12517
by Dave Oliwa If you're not looking forward to the future, excited about the prospects of what technology can do for you in the studio, you're probably headed for retirement or thinking about another line of work-—if not, you...
Read More...
© 1988 - 2023 Radio And Production, LLC
Go to Top