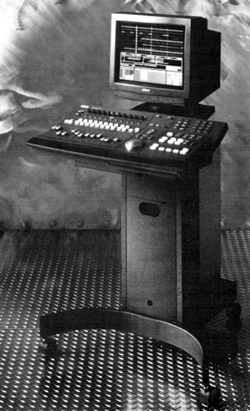 In a world full of digital workstations to choose from, it’s a pleasure to come across the Orban Audicy.  Like its predecessor, the DSE-7000, the Audicy is a workstation designed for radio production first.  Radio production people like you actually had a lot of input on the design.  The result is a digital workstation with a ton of power and a user interface that enables even the least technically inclined person at your station to access that power.

A typical Audicy system comes with the control panel, a monitor, the Pentium computer which houses the audio I/O cards and 2-gig drive, and the roll-around stand which houses all the components.  An Iomega Jaz drive and a data DAT tape backup drive are optional, but highly recommended.  The Audicy comes with balanced XLR analog stereo I/O and two auxiliary sends.  The optional digital I/O card provides both S/PDIF and AES/EBU formats.  The Audicy is a RAM-based 10-channel digital workstation with twenty-four tracks.  Don’t get confused.  The first ten “tracks” are assigned by default to the ten “channels.”  Then there are fourteen additional “virtual” tracks for a total of twenty-four.  The Map Tracks function is used to assign any of the fourteen additional tracks to any one of the ten channels, but only ten tracks, any ten, can be mixed at a time.

The extra tracks come in handy for a number of things.  Most useful is the ability to record “update” tracks that can be moved to the virtual tracks until they are needed in the mix, thus freeing up all ten channels for the current mix.  The virtual tracks are also great places to store backup copies of tracks you plan to do lots of editing on.  If you ever need to recall the original, it’s there.  Each of the twenty-four tracks can be named, and the name will appear at the left of the track display when the cursor is at the head of the production.

The Audicy is a major upgrade of the DSE and comes with several new features, the most obvious being the new control panel.  It is about six inches wider, a little deeper, and the back portion of the panel slopes upward to make the controls furthest away easier to see.  Orban has exchanged the beige color of the DSE’s control panel for an attractive dark gray.  The Audicy adds several more buttons, knobs, and a few more faders to the control panel and moves some of the editing and transport controls to more convenient locations.

The control panel now has thirteen faders, three more than the DSE.  Two of the new ones are for channels 9 and 10, and the third is a fader for the submix (more on that later).  A pair of INPUT monitor faders bring the total to thirteen.

Above the ten channel/track faders are white PLAY and RECORD buttons for each track.  The RECORD buttons select one or two tracks for recording and arm tracks for certain editing functions.  The PLAY buttons also select tracks for editing as well as playback.  Above these buttons is a row of blue SELECT buttons with red LEDs in the center of each.  These are just below a row of ten PARAMETER CONTROL pots.  These two sets of controls were not on the DSE and are a wonderful addition to the control panel.  They access the unit’s effects patch bay and enable quick parameter adjustment without having to move the faders as was necessary on the DSE.  The SELECT button’s red LED lights to indicate that a track has an active effects patch.

An A/B button replaces the DSE’s SOLO button.  It retains the original function and adds a new feature.  When pressed, track PLAY and RECORD buttons can be set to a different configuration, ideal for putting a single track in “solo” mode without affecting the other tracks.  This is most helpful when editing tracks.  Use the B mode to select tracks for editing.  When editing is done, select the A mode to return the tracks to the original play/record status.  The new Auto A/B function automatically switches to the “B” setup when the record mode is entered.  This enables the Audicy to provide “auto-monitor switching” when doing punch-ins, allowing you to hear playback of a voice track, for example, until the punch-in, at which point, the Audicy switches to the “B” setup where you can have the playback for that track turned off, leaving only the input signal, and any other tracks such as a music bed, in your headphones.

To the right of the mixer section is the large silver scrub wheel that features a user adjustable Speed Limit and Gear Ratio.  Because all audio is in RAM, there is absolutely no delay when “rocking the reels.”  The scrub is as close as it gets to the real thing, and this makes locating very precise edit points very easy, which is a good thing, because the Audicy does not provide high resolution waveform editing with zoom in/out functions.

Above the scrub wheel are four large arrow buttons for navigating through the on-screen menus.  Above these are the PAGE UP and PAGE DOWN buttons also used for screen navigation.  At the top of this section of the panel are five smaller, green buttons.  The HELP and ESC buttons are carry-overs from the DSE, but the MIXER and EDITOR buttons are new.  They allow quick access to the Audicy’s two main screens.  The fifth button is unlabeled and obviously awaits future software upgrades.  There are two more unlabeled buttons at the top right of the panel, giving the Audicy room to grow.  And if that’s not enough, the addition of CTRL and ALT buttons together with the original SHIFT button leave plenty of unused keystrokes available.

There are several more buttons on the right side of the Audicy’s panel that are not found on the DSE’s panel.  Again, many of these are buttons that bring to the control panel functions that require menu selection on the DSE.  These include INPUT for toggling between digital and analog inputs, SPLICE for setting the edit “splice angle,” and BOUNCE which toggles between the bounce record mode (for mixing up to ten tracks down to two) and regular record mode.  A numeric keypad was also brought to the control panel for easier input of numeric data.

Apparently, the DSE found its way into enough A/V production houses that Orban decided to add a healthy dose of SMPTE functions to the Audicy as an option.  OFFSET and CHASE buttons are new to the panel.  The Audicy supports 24fps and 25fps dropframe, 29.97 dropframe or non-dropframe, and 30fps formats.  Audicy can chase incoming time code or generate it internally.  A SMPTE Time Code Setup screen provides access to several SMPTE parameters.

The right side of the panel closest to the user is where the transport, editing, and locate controls are found.  Much time went into determining the ideal layout of the control panel, and the homework paid off.  After a while, performing multiple keystroke functions becomes a quick, subconscious effort as your hand moves across the panel.  Since the transport controls are the most used, they are placed nearest the user at the bottom of the panel.  You get the usual RECORD, PLAY, STOP, FFWD, and REW.  The CUE button toggles between the two “tape” ballistics modes.  When it’s flashing, the FFWD and REW buttons jump through the audio in :20 segments.  When CUE is not flashing, the FFWD and REW buttons have normal “tape” type ballistics utilizing Orban’s unique “tape rewind/fast forward” audio effect.

The SOURCE IN, SOURCE OUT, DEST IN, and DEST OUT buttons mark edit points.  Press SOURCE AUDIT to audition audio at the SOURCE IN point.  Likewise with the DEST AUDIT button.  If you want to loop something very quickly, mark the Source In and Source Out points and press PLAY and SOURCE AUDIT simultaneously.  The loop plays until you hit STOP.  The DEST IN/OUT buttons are also used to set in/out points for the Auto Punch-in/out function.  In fact, there are several multiple keystroke functions on the Audicy.  They’re the kinds of shortcuts and tricks one learns over time.

The ENTER and UNDO buttons are part of the group of editing buttons.  ENTER executes a function and UNDO undoes the last edit or recording.  There’s only one level of undo, but regular use of the Copy function on important tracks or the Copy Self function on entire projects will keep you out of trouble.

There are nine buttons dedicated to the Audicy’s locate functions.  SET sets locate points (up to 24) which are numbered on the screen and can also be labeled.  The <-LOCATE and LOCATE-> buttons move the transport quickly from locate point to locate point.  The GOTO button brings up the Go To Locate Point screen that lists existing markers and lets you select the locate point to go to.  HEAD takes the transport to the beginning of the project.  TAIL locates to the end of the project.  LOCATE 1 and LOCATE 2 are two dedicated buttons for easy access to the first two locate points set.  The LAST RECORD button locates to the point where the last recording began--there’s no quicker way to setup for retakes.

At the top of the “cool” list of new features is the way Orban took the clunky computer keyboard completely out of the equation...almost.  The keyboard has been replaced with a much smaller laptop-size keyboard snugly fit into a small drawer which hides nicely under the control panel at the right front.  If you didn’t know it was there, you’d think they forgot to ship the keyboard.  The keyboard is used only for text entry--naming projects, editing note files, etc..

April 01, 1993 13832
by Jerry Vigil This month's Test Drive features a box from a company you don't hear a lot about. Sound Performance Laboratory, or SPL, is based in Niederkruchten, Germany, and their Vitalizer Psychoacoustic Equalizer offers an...
Read More...
© 1988 - 2023 Radio And Production, LLC
Go to Top