Chris O’Brien is only 19, but you wouldn’t guess that by hearing this month’s featured spot, or by reading here about how he produced it on ProTools.  Chris has been tutored by some of the great producers from Q-102 in Philly, including David Jay, who has won several RAP awards and Chris’ boss at SoundByte, Frank Cerami.  Chris has also been getting his feet wet in video post-production, doing sound design for some independent films and cable shows.  You’ll hear much of that sound design experience in this production.  Read here about Chris’ studio techniques, then hear the piece itself on The Cassette. 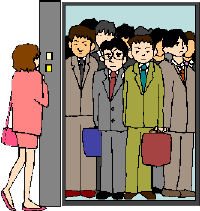 Much of the production is in the elevator scene in the first fifteen seconds.  Chris used fifteen tracks in this portion.  Each voice had its own track and the music and fx had stereo pairs.  Voices include Chris, Lillian Gavin, Buzz Bay, and Frank Cerami.  All voices were mic’d with a Neumann U87 with the exception of Lillian, who recorded her portions over the phone from the comfort of her apartment.  All voices were recorded flat through a Mackie 16 x 8 board into ProTools, again with the exception of Lillian whose voice was recorded to DAT on a Tascam DA-30 DAT deck.

After recording all the voices, Chris edits each person’s tracks to save only the pieces he needs.  He discards the unused portions to help keep the ProTools system stable.  He will assemble the conversation later.  First, he pieced together the elements that make up the opening scene.

Chris says he wanted a “sitcom feel” for the opening.  Music from the Simpsons CD “Songs in the Key of Springfield” helped set the scene.  The laugh is Homer Simpson from that CD.  For the footsteps of the person running to the elevator, Chris mic’d himself punching the soundproofing on the walls.  Chris also “voiced” the huffing and puffing.  All other fx are from the Hollywood Edge library.  There is lobby ambience at the open which is a mix of a lobby ambience track and a lunch room track.  He recorded this in with reverb to blend them together.  The reverb was the “Room Ambience” setting from a ProTools plug-in.  Since he combined the two effects, they took one stereo pair instead of two. Chris then needed an elevator ding and doors opening.  Hollywood Edge had them, but to make his scene work properly, he needed the doors to close as well.  So he recorded the opening door to reel tape, reversed the reels, then played the sound backwards into ProTools.  This wasn’t as quick as it sounds, since the 2-track is in the next room.  He had to patch that room into the main room, string up the reel backwards, then go to the main room, start ProTools recording, then go back to the second room and start the reel.  As the door closes, the lobby ambience fades down as the inside ambience tracks of the elevator fades up.  Chris says too many producers, “don’t take the time to look at things theatrically.  The elevator noise should come up gradually, not just appear.”  The elevator door and elevator ambience are on the same tracks.  Having them on the same tracks made the fade up match the fade down.  Also, Chris says, the mouse wasn’t working well the day he produced this, so it was just easier to leave them on the same track.  Listen behind the conversations, and you’ll count eight “dings” as the elevator makes its trip to the eighth floor.  Chris copied the original and spaced them evenly.  After the scene was built, Chris edited in the voice tracks.  Each is on its own track.  He tried adding a tight reverb to simulate the interior of an elevator, but that caused problems with phasing when he checked the tracks in mono.  Instead, he went with just a light reverb to give them a bit of presence.  For this, he used the D-Verb reverb plug-in for ProTools.  He mixed in about 10% of the wet signal.  Later in the production, he mixed about 44% of the wet signal of the same effect for the “inside-their-head-thinking” effect on the “Oh my God, oh my God” line.  The one element in this scene added after the voices was the phone ringing.  Its placement was dependent on the timing of the conversation.  The phone rings help keep the scene surreal and off-balance since one doesn’t associate a phone call with being in an elevator.  Chris was careful to position them so they would not coincide with the floor dings.  As the elevator rises, so does the tension.  The voices get more intense and the music switches from sitcom to horror movie.  This is the familiar Psycho music.  Chris found this on a Hitchcock soundtrack CD.   The fades up and down between the music tracks were internal in ProTools.  When the door opens, the music ends cold.  Chris edited the Psycho bed to fit the length needed.  The laugh you hear comes, again, from the Simpsons.  This time it’s Krusty the Klown.  There is also a short crowd scream from Hollywood Edge.  Chris says it’s such a good crowd scene that everyone uses it.  To make his unique, he sweetens the stock sound with himself and others shouting along with it.  Doing this, he has collected a DAT full of variations of that track.  The little girl who’s “got the album” is Lisa Simpson, another drop from the Simpson’s CD.  Under the music cuts is another crowd track from Hollywood Edge.  The stinger is from Killer Tracks “Sweepers and Stingers” volume 3. The music track is a Bonnie Pointer dance cut.  The lyrics beat-matched to it are from a second song.  Chris edited the lyrics to match the tempo of the Pointer cut, copying the “D” and “J” as needed.  In the middle of the spot, Frank gets to the straight sell listing the drink specials, events, etc..  Underneath is crowd noise (a straight track from Hollywood Edge) and in some spots, part of Sister Sledge’s “We Are Family.”  You’ll hear a highpass filter on Frank’s voice as he talks about the swimsuit competition.   This is the same filter used on one of the voice tracks in the elevator scene.  As Frank says the words, “end of summer swimsuit competition,” Chris added some stereo phasing by copying the phrase, then offsetting it 3 milliseconds from the original.  At the end of this sell, Frank gives a phone number.  Chris again copied the number to another track, offsetting it slightly to give it a phased effect.  When he’s ready to mix down, he opens the ProTools mix window and records the fades needed for each track.  This gives him an automated mix when he plays back all tracks. All tracks are sent to outputs 15 and 16 of ProTools.  This feeds the board.  He uses the dynamics compression plug-in from ProTools on these two outputs to ride gain on the entire production.  Threshold is at -38 dB, ratio of 2:1, attack at 15ms and release of 200ms. After the mix, Chris checks how it will sound in the real world by piping it through the internal speaker of a TV set.  His fine listening is done on Genelec 1031s or Yamaha NS-10s.  There’s a great little movie in this commercial.  Grab some popcorn and pop in The Cassette.

If you’d like more details about it, Chris can be reached at SoundByte Productions at (215) 893-3004.  Next month, we look inside the bits and bytes of a promo for the 99X Web site from the guy who also keeps the RAP Web site up-to-date, Andrew Frame.