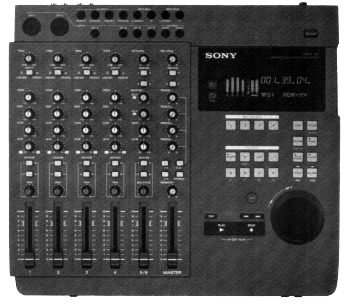 Are you keeping up with it all? The hard drives, the digital audio-on-videotape, MiniDisc, DVD, not to mention CD, CD-ROM, and our "old" friend, the DAT machine? Well, start a new file...

It's new, it's talented, it's inexpensive, and it's a lot better than you might think. It's the studio-in-a-box concept invented by the company that starts with a "T"—little cassette "portastudios" sold by the zillions to garage bands and tweak-free propeller heads making synthetic music in their attics. They used a standard cassette, had a little mixer with simple EQ onboard, four inputs, four tracks, stereo out, worked on batteries or the optional adapter, and almost—almost—fit into a guitar case. A couple of dynamic mics and you were in the studio! They were kewl. For a little over $200, multitrack technology was in the hands of the masses. Damn the noise—full volume ahead!

Sony, with a few other companies including the one with the "T", decided this arrangement wouldn't be half bad as a semipro box if they stuck the current MiniDisc recorder tech into it and added a versatile mixer. Now, with the addition of functions normally found only in fairly expensive pro-audio editors, it was easy to copy, move, exchange, and erase portions of tracks, entire tracks, portions of 4-track productions or entire productions, all while mixing it down at the same time. Compact, complete, quick, and quiet, the rebirth of the idea in the digital domain made sense. And, once it was digital, it was easily adapted for MIDI as well.

Sony's entry into this new market (created by Sony itself—they invented the MiniDisc) is on the board for this month's RAP Test Drive. The Sony MDM-X4 MiniDisc Multitrack Recorder isn't going to fit into a shoe box this time around, though. It's grown to tabletop size. But, not unlike Dr. Who and his inter-dimensional, time-traveling phone booth, it's still much bigger on the inside than it is on the outside. The "current MiniDisc recorder tech" is the almost vertical line going up on the graphical chart of "Advances In Digital Stuff." In computerese, this is the latest, greatest magneto-optical read/write/repeatedly stuff with one of the best digital audio data compression schemes we've got, so far. It even works! And you know what? Just over three years ago, there were some major advances in preamp design that allow absolutely incredible low-noise performance from the analog audio electronics.

There's even another new media being used. Although the X4 can work with 60 and 74 minute MiniDisc Audio Disks, you'll only get a choice of recording on one (mono) or two (stereo) channels. To get the 37 minutes of all four tracks operating, you'll have to hunt down a 140MB MiniDisc Data Disk. Is there really a difference? My calculator says no. I wrote the RAP Test Drive of the first Sony MiniDisc recorder four years ago. Guess what? I bought the machine afterwards. It's still a little workhorse today; I use it as a "sound palette" if you will, to drop whatever I've chosen to use later. (I don't think I could live without it.) That means I already have a lot of MiniDiscs, of the audio kind. It would be nice to use them. But, I digress. The bottom line is: at the moment, MiniDisc Data Disks are hard to find. Best Buy, Circuit City, CompUSA, Computer City, my broadcast suppliers, and even my mail-order computer suppliers don't carry them yet. Even so, you only need to find one supplier with a good price.

That said, it's time to explore.

February 01, 2001 17309
By Steve Cunningham Since the price of my electric service here in California is definitely going up, it’s some consolation that the price of digital production gear is still going down. About a year ago I reviewed the HHB...
Read More...
© 1988 - 2023 Radio And Production, LLC
Go to Top