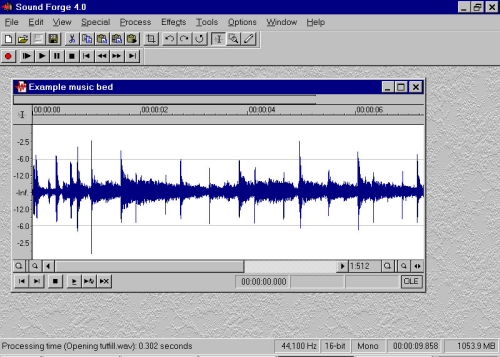 If you've read the past few RAP Test Drives, you might have gotten the impression that computers and audio software have arrived at a technological level where the audio production pro can take a serious look at these systems as viable candidates for the broadcast production studio. If you got this impression, you were correct. High speed computers are not only capable of performing some heavy duty production, but they are very affordable. And the software that is available for audio pros is getting better and better, it seems, almost every day.

Sound Forge 4.0a from Sonic Foundry is a 2-track digital recorder/editor with a ton of bells and whistles. The software resides on CD-ROM where you'll find versions for Windows 95, Windows NT, and Windows 3.x. For Windows 95 and NT, Sonic Foundry suggests at least a 486-SX but recommends a Pentium processor. For Windows 3.x, a 486-DX is recommended. Your best bet is to get all the speed and RAM you can. For this Test Drive, Sound Forge 4.0a was installed on a Pentium 200 with 64 megabytes of RAM and the Tahiti sound card from Turtle Beach Systems.

Normally, when a file is opened, a backup copy of the file is made to prevent loss of data in the event of a power failure or crash. Any edits made will be written to the backup file. When you choose to save your work, the original file is replaced with the backup. You have the choice of opening files in the Direct Edit mode. When a file is first opened in this mode, the file is read and a second "peak" file is made which contains just the necessary information for Sound Forge to display the waveform on the screen. Once this file is created, opening the sound file is virtually instantaneous. However, in Direct Edit mode, all edits are made directly to the original file. Sound Forge provides unlimited undo (assuming you have enough disk space), so editing directly to the original file is not a problem, unless your system crashes. In that case, the file would remain in its edited form (no undos). The Play button in the Open File dialogue box enables previewing sound files without actually opening them. Activate the Auto Play function and simply clicking the file name starts playback of the file.

Once a file is loaded, the Data Window displays the waveform--one channel for mono, two channels for stereo. Simple click and drag movements "select" areas of the waveform for playback, editing, and/or processing. Dragging a selected area to any area on the Main Screen's background will instantly create a new Data Window with just the selected audio. This is a very fast way to cut up a large file containing several elements you wish to file separately. Playing the sound file is as simple as clicking the play icon or hitting the space bar. The space bar is easily my first choice, and you get "instant start." There are three play modes: Play Normal, Play Looped, and Play as Sample. Play Normal plays from the cursor point to the end. Play Looped loops the selected area. I found this to be a very fast and very easy way to loop segments of music beds. Adjusting the start and end points of the loop is very easy and can be done on the fly while the looped segment is playing. Play as Sample plays the file as though it were a sample such as a musical note. If a sustaining loop is defined at the end of the sample, playback will loop for the defined number of times before playing to the end.

January 01, 2009 8219
by Steve Cunningham Having recently checked in with two of our favorite Sony products, Vegas 8 and SoundForge 9, I thought it time that we check in on Sony’s Acid product, which has recently arrived at version 7. A percent-off...
Read More...
© 1988 - 2023 Radio And Production, LLC
Go to Top