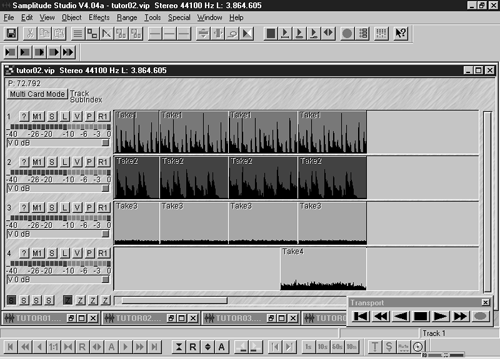 Have you noticed how inexpensive high-powered computers are these days? Have you noticed the incredibly low prices of disk drives and RAM? Sure you have. Have you checked out the amazing quality and abundance of software available for audio pros such as yourself? Have you noticed that a very small investment can provide digital recording technology that simply was not available for under ten grand a few short years ago? In fact, much of the technology was not available...period! Samplitude Studio from SEK’D is another fine example of just how far digital audio has come. and with a label that reads, “Made in Germany,” Samplitude Studio proves that the language of multitrack digital audio production is basically universal. At a list price of $599, this Windows-based software package puts high quality digital production capabilities in your PC that would have revolutionized audio production just five years ago.

Samplitude Studio is a member of a family of digital audio software programs from SEK’D. A scaled down version, Samplitude Pro, is a pretty healthy 8-track system for the mere price of $199. But if Samplitude is to be considered for the professional audio environment of a radio station production studio or the independent producer’s studio, Samplitude Studio is the less limiting choice.

Samplitude Studio comes in a box large enough to hold the software CD and the two manuals, the Tutorial and the Reference Manual, each about a half-inch thick and loaded with more information than the average radio prod pro has the desire or the time to deal with. Unfortunately, book time is essential, but the result is well worth the time invested. Once you get past hand shaking with the mouse and a few trips to the manuals, you discover a power-packed digital multitrack workstation designed for speed.

Samplitude Studio provides up to 999 stereo tracks. Of course, how many can be mixed simultaneously in real time is dependant upon your computer hardware. (A nifty little indicator on the main screen displays the percentage of DSP power being used to let you know how much power you have to spare!) SEK’D suggests at least a 486 PC running at 66 megahertz with 16 megs of RAM and an A/V capable hard drive along with Windows 95 or Windows NT. A Pentium is “strongly recommended,” and that is what this Test Drive is done on, a Pentium 200 with 64 megs of RAM. The audio card on our system is the Tahiti card from Turtle Beach Systems.

Right off the bat, one thing that makes Samplitude Studio attractive is its ability to address several audio cards. This review only played with Samplitude on a single stereo in/stereo out card, but Samplitude Studio allows assigning individual tracks to individual channels of any number of cards. The program is compatible with all Window’s compatible cards, including SEK'D's own audio cards (ARC 44 and ACR 88), so the options are numerous. If you’re into live music recording, record multiple tracks simultaneously. Samplitude Studio also allows recording while playing back other tracks. But perhaps most useful to the radio production environment is Samplitude Studio’s ability to assign a second stereo I/O card to the program’s two auxiliary sends (found on the internal mixer). This makes it possible to use any of your external effects boxes and bring the returns to your console or even to additional tracks in Samplitude Studio where you can further manipulate the returns.