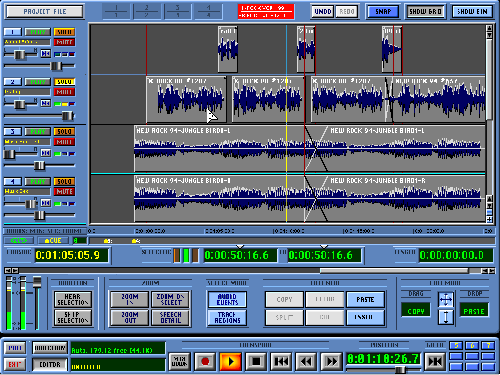 It's the end of an era for digital workstations. I'm talking about the one you've had for a while, provided your station jumped into the arena (back when it was supposed to). With few exceptions, today's equipment far surpasses the somewhat "clunky" workstations of the early '90s.

Now, the real fun begins, with powerful allies humming away at your side, ready to instantly churn out commercials, promos, sweepers, and more! at an alarming rate. New computer-based professional editing workstations have had the benefit of almost ten years of advancements in the way they work. (That's a long time in dog years, and even longer in computer years.)

The milestone of a new era has to be measured in human terms. In this case, with the digital workstation becoming as easy to work with as an old-fashioned reel-to-reel analog tape deck. The truth is, a lot of those "early" workstations were complicated to work, and simply too slow. The speed of producing, combined with the learning curve, wasn't satisfactory for most who were willing to just rack up a tape and do it the old way. It was faster to use the analog multitrack, from laying tracks to mixing them down. For speed and ease of use, tape ruled!

Surprisingly, what we needed from digital recording was something down and dirty, quick and simple, like a tape deck. No matter what the strengths of digital are, if productions take longer to produce because of the machine itself, or if the average producer is awash in a sea of unfathomable commands, digital audio workstations really don't help us get the job done "faster." I know your first reaction might be to get a rope or to argue for the great creativity that is unleashed by that one little word: undo.

But, the bottom line is: the more complicated the box, the less likely it is everyone working with you will be able to work with it.

Don't get me wrong; I loved having the cool stuff all to myself, until it became clear I had more work to do, because "they" couldn't work "that thing," and training took time...sweet time. An excellent Program Director once advised me (while I was learning the corporate ways); he told me, "If the process can work just as well when you're not there as when you are, you're doing your job well."

That is what good management is about-—maximizing your workforce, with little or no maintenance. And that is where choosing your equipment carefully enters into the big picture. After all, what good is the investment of thousands of dollars if your staff cannot, or will not, use the equipment?

September 01, 2004 7246
by Steve Cunningham I do a fair amount of remote recording. Now while that sounds exotic, it usually isn’t anywhere close — I’m in a conference room recording a group of business types having a roundtable discussion, or in a...
Read More...
© 1988 - 2023 Radio And Production, LLC
Go to Top