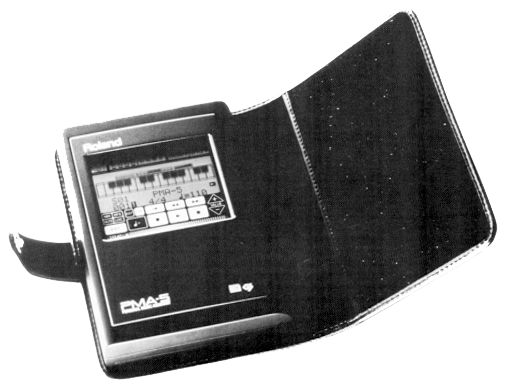 I once read this bit of wisdom in a management periodical: Before you buy a new device, or piece of software, ask yourself if it can do the job better than a piece of paper and a pencil. I took this into account while demonstrating the new PMA-5 (Personal Music Assistant) from Roland.

You see, you use this device like paper and pencil. Moving a pen across an LCD screen makes this thing tick. So I wanted to see if it would allow me to easily and practically make music beds for productions. Ease and practicality I define as quickly taking an idea for music and hashing it out on the PMA-5. Especially given my familiarity with music and inability to get my fingers to play what I want them to on any instrument.

The PMA-5 is a hand-held portable battery or AC operated device that uses an interface known as "pen-computing." A small plastic-tipped "pen" is included which lets you tap and drag through its menus. Or you can put the pen away in its compartment and tap away with your fingers. Both work just as well. It comes with a handy carrying case which can be removed, although I wouldn't suggest it. It protects the device quite well. I can vouch for that because I dropped it twice and it still works great. That wasn't part of my testing regime, just a case of accidents happen. However, I wouldn't suggest you try the same with a keyboard, which the PMA-5 takes the place of quite well.

At the heart of the PMA-5 are one hundred different musical "styles." For instance, do you want Bluegrass or Hip Hop or Gangsta Rap or Glam Rock or Bratwurst waltzes? They're all in there. All have four tracks (typically two accompaniment instruments, bass and drums). Each style in turn has an intro, two main phrases, two fill sections and an ending. Say you had a thirty-second piece of copy that had an intro like this: "There's only one place to buy your fireplace this fall, and that's during the big fire sale at Sparky's!" You could use a style to go under just that part. Then use another variation of that style to go under the next paragraph of the spot, and so on. You could even add in the fire truck sirens using the PMA-5 because it has a whole section of Sound Effects. More about that later. Basically, it lets you customize music beds for productions quickly. Adjust the tempos of the styles to fit the tempo of the read. With the PMA-5's one hundred styles and six variations of each of those styles, each one from one to eight measures in length, there's a lot to choose from right at the start.

Ah, but what if you want to create your own styles? Got a hankering for a thrash metal bed under that cemetery spot? Easy. Well, easier than getting that concept sold at least. The PMA-5 has a full-fledged 8-track sequencer in it. Use the pen to record what you play in real time on the keyboard in the LCD display, or switch to step time and add in notes one at a time. Of course, the PMA-5 has MIDI In and Out jacks in the back, so you could play direct from any MIDI instrument and have the PMA-5 faithfully record it.

So, you've got all these nifty styles, but something is gnawing at you. You gotta create. Dad's gettin' a new artificial leg and you just have to, you know, write a song about it. So take a stand. Put your best foot forward and compose! I mentioned that the PMA-5 has an 8-track sequencer in it. Four of those tracks are for styles (accompaniment, bass and drums). The other four tracks are your polyphonic playground for creating a song. Let me see if I can explain this better: You know in a digital sound editor how you have a main editing screen where you put your productions together. Then, hidden on your hard drive you have the little mono or stereo sounds in a library that you can place into your main production. Well, that's what the relationship between styles and songs in the PMA-5 is. Songs are the main productions. Styles are the library "parts." Stick any one of the six hundred 4-track style parts in a song, and then have four extra tracks to compose your melody, or additional accompaniments or percussion in. In addition, you then have two other control tracks, one to program in the progression of chord changes and one to program in style changes.