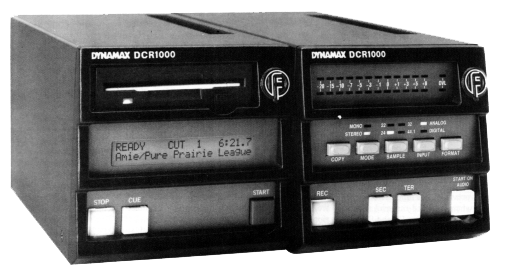 Digital workstations are quickly becoming standard gear in production studios worldwide. But you might be surprised at how many stations still dub their digital production to analog carts for airplay. Certainly, for these stations, upgrading to a completely digital on-air system is in future plans, and it's no surprise that a station might upgrade their production studio before converting the on-air studio--the latter can be a much greater task. Still, it is a task that is inevitable for any station that plans to stay in the game. The question is, which format to take. Some stations opt for the hard disk storage/retrieval systems where everything is stored on file servers tucked away in a closet or corner somewhere. Other stations will choose a more visible format, one where you can actually hold in your hand the various elements that make up the programming day. For these stations, the Dynamax DCR1000 Series Digital Cartridge Machines from Fidelipac are the answer. Carts are replaced with floppy disks which you can see, touch, take from one room to another, label, and so on--all the things you can do with carts, minus many of the problems inherent with carts. And there are many pluses with this digital format that analog carts can't touch.

The Dynamax DCR1000 cart machines aren't new, but Fidelipac recently introduced magneto-optical drives and disks as options. The MO version is the one used for this Test Drive. The original machines are equipped with drives that use 3 1/2-inch floppy disks available in two sizes. The 2MB disk is the standard 3 1/2-inch floppy you can get at the local computer or office supply store. With the 2MB disk, variable sampling frequencies enable recording anywhere from 37 seconds of 44.1kHz stereo audio to 2 1/2 minutes of mono voice quality audio to a single floppy. With the sampling frequency set at 26kHz, a 2MB floppy delivers 63 seconds of stereo recording time. And the cost per disk is nothing compared to the cost of carts. Get a box of 200 2MB disks from Fidelipac for just fifty dollars. That same fifty dollars will get you about ten analog carts. For stations wanting to put longer program material onto disk, the 13MB disk is available at about eleven dollars each. A 13MB disk can hold up to five minutes and ten seconds of 32kHz stereo audio and up to fifteen minutes of mono voice quality audio (22kHz sampling frequency).

The new magneto-optical drives unleash the power of the DCR1000s by providing literally hours of recording time per disk. At $18 list, the 128MB disk will hold an hour and six minutes of stereo broadcast quality audio (32kHz sampling) or over three hours of mono voice quality audio (22kHz sampling). At $32 each, the 230MB disk provides just under two hours of stereo recording time (32kHz sampling) and almost SIX HOURS of mono voice quality audio (22kHz sampling). With these lengths, the DCR1000 can be used for virtually any and all program material. The MO disks are the same size as the 3 1/2-inch floppies but are about twice as thick. (The "apt-X" audio compression algorithm is used to achieve a 4:1 audio compression ratio.)

August 01, 1999 2535
Dave Lee, WAMZ-FM, Louisville, Kentucky by Jerry Vigil If you’ve been in production for at least a decade, you remember the rapid spread of CHR-type production into other formats. In Country radio, this style of imaging first...
Read More...
© 1988 - 2022 Radio And Production, LLC
Go to Top