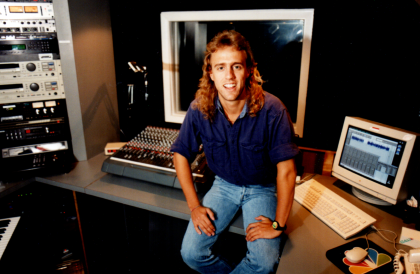 It's the dream of many Production Directors, to one day break away from the radio station and start your own production company. We regularly visit with people who have done just that, but rarely do we find someone who has done it so quickly and with as much success as Brian Lee. With several Radio And Production Awards under his belt, and over 60 stations paying for his services, it's no wonder Advantage productions enjoyed 100% growth in its first year, 100% growth in its second year, and third year projections at 80%. What's even more impressive is that Brian is only 25 years old. It's safe to say, Brian Lee and Advantage Productions have a bright future. Join us for a very informative chat with Brian--"must read" info for anyone with the same dream.

R.A.P.: Tell us about your background in radio prior to going into business for yourself.
Brian: My father was in radio and television news. He brought me into his station one day when I was a kid, and it just fascinated me. I guess I caught the bug at age two, and it just stayed with me. I was thirteen years old and living in Albany, Georgia when I got my start at a five thousand watt AM country daytimer. About a month after my first air gig, my father took a new job at an ABC affiliate in Florida and we moved to Fort Myers, where I am now. I was only fifteen, but I picked up a job at another AM station. This time it was a Big Band station, and I tell you, it wasn't very desirable working for a Big Band station at age fifteen. However, I got a chance to learn who Benny Goodman and Tommy Dorsey were. That lasted five months, then I was working part-time at the CHR station here in town, WINK FM97. I was sixteen, so I could finally get to a station without my parents driving me, and that was exciting. I worked part-time there for a while and dotted around from station to station in the area until about 1987. In 1987, I went to work for WRGI in Naples. I was seventeen years old. That's where I began to produce commercials and promos for a Program Director there named Russ Brown who really let me experiment in the production room.

By 1990, I became Production Director back at WINK-AM/FM where I worked for a year. There I kind of got myself into analog multitrack production and started being a little more creative because of the tools I was working with. In 1991 I got a job at WMXB-FM in Richmond. I was there for two and a half years as a Production Director. That's where my career started to take a turn, and this is where Advantage Productions originated.

R.A.P.: How did Advantage Productions get its start?
Brian: I was vacationing in Sarasota and heard a voice on an oldies station, and I really liked the voice. I was interested in getting him to be the sweeper voice at the Richmond station where I worked. I called up and asked him if he would be interested and he said, "Yes." So Ray Otis became the voice of 'MXB in Richmond. Then, about two or three months into that, I got a call from WUVA in Charlottesville, Virginia, a college station. They asked if I could produce some sweepers for them. It was the first time I ever got a call like that. I went ahead and produced a package for them. They were happy and came back a couple more times to get some more stuff. I thought this was pretty neat, so I went ahead and asked Ray if he would be interested in voicing some other stations, and he said he would. So I wrote up a bunch of bogus sweepers for bogus stations and placed an ad in R&R. I will never forget the day. I walked in from lunch and the receptionist said, "Brian, you got your first call." It was for a demo request from KAYL in Storm Lake, Iowa. I'd never heard of KAYL; no one had. The receptionist was really excited for me, and I was jumping up and down. So, I went ahead and sent a demo and got some business from them. That was the beginning of Advantage Productions, and I picked up stations pretty quickly after that.

I wasn't making a whole hell of a lot of money because I would just sell my work to a station and basically wait for the next call. So I would do a little work, get the money, pay for the supplies, and then move on to the next one that called. But in April 1992, a good friend of mine named Chris "Blade" Corley and I started talking about teaming up and producing sweepers and promos. Now, Chris was already well known in the voice talent industry, and, at the time, I was only using Ray Otis. Being able to offer two different voices seemed to be a good idea.

The turning point for me, as far as earning income on the side, came when Chris told me stations were paying him monthly retainer fees for the use of his voice. I adopted that idea immediately, then started offering stations not only voice, but voice and production for a monthly retainer fee. In 1992, a lot of the voices were only offering themselves and not any production. By offering a really good price, stations quickly jumped on because they couldn't turn it down. I mean, I was charging almost the same price as others were charging for voice alone. I was doing it for beans. I was meeting Chris's price and just taking what I could.

The station was really good to me, though. They let me use their production facilities. All my work was produced in WMXB's 4-track analog production room, and needless to say, it was really hard to keep the stuff clean and in phase, considering that Ray and Chris sent me all their stuff on reel. I had to lay down all the audio on a 4-track, add all the effects, and then dump them all back on a 2-track with some reverb to help cover up a multitude of sins. But at that point, I'd started picking up stations. By November 1992, business had gotten so good that I decided to invest in my own studio, and I built a digital recording studio in my house.