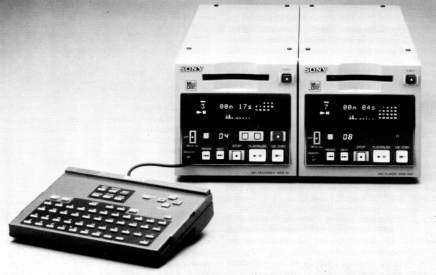 Some of you might actually remember when Fidelipac carts were first introduced into radio. And what a great idea they were! An easy to handle, stackable plastic box with audio conveniently cued for instant access. No rewinding, no cuing; just jam it in and go. For those of us lucky enough to work for companies who realized the importance of outfitting the production room with the best equipment available, carts were the weakest link in the chain! Phase errors, gummy heads, noise, noise, noise, and that nasty way they explode into a billion pieces with only the slightest toss at a wall!

Out of everything the Production Director uses to "get the job done," it's the tape cart that has to be updated if your station is truly upright and walking in the '90s.

There are two basic approaches to storing audio for commercials, promos, sweepers, and music I call them "big boxes" and "little boxes."

This time, RAP looks at one of the "little boxes" blazing a new trail into real time, digital/optical storage, the Sony MDS B1 MiniDisc recorder and player the professional's model: balanced in/out, barrier protected Record, Stop, and Eject buttons, and a remote control port. (More on these later.)

First, in case you've been working too hard and haven't heard about the MiniDisc, let's describe it as a recordable, magneto optical technology, like a compact disc, but with the ability to be rewritten over and over again up to 74 gloriously digital minutes.

Sony introduced the MiniDisc a little over a year ago to compete directly against Phillips' Digital Compact Cassette (DCC) with Denon and Otari jumping on Sony's bandwagon. Just a little over a month ago, Sony released the "pro" models.

Out of the box the MDS-B1 sits three abreast in a rack, much like a Delta type cart machine or CD machine, though not quite as deep. The barrier protected Power switch sits on the back panel along with a power cord socket, a grounding post, the XLR In/Outs, a Stereo/Mono mode switch, screwdriver accessible trim pots for input and output levels, and a remote control multi-pin connector with access to LED current.