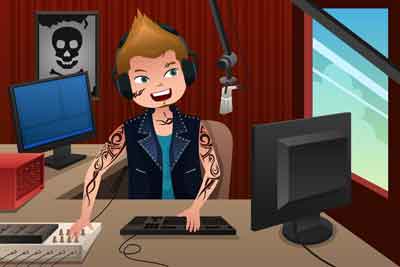 Maybe you've always been on the air. Or maybe last month your station did the doo-wop and now you're the Production Director for two stations and an "air personality" from nine to noon. Whatever the reason, sooner or later you'll probably be responsible for an airshift. And just in case your Program Director doesn't have time to explain the facts of air life to you, let's do it now so you can develop this valuable (read $$$) skill. We have a sign on our air studio wall. It reads "P.R.E.P.." That's an acronym for Prepare, Edit, Rehearse, Psych, and it's a pretty good four-step outline for effective announcing.

Preparation means learning your part. Being an announcer is an acting job; and, just as no professional actor would go on stage with no lines memorized, no ideas organized, and no direction known, neither should you open the mic without a plan. Stand up comics who do improvisation don't fly blind. They just make it appear that way with good acting skills and preparation. Anyone who thinks you "just go on the radio and be yourself" only gets the surface part of the picture. In fact, being natural on the air requires super-human effort. Really, what could be more unnatural than working alone in a room full of blinking electronics, flushed with adrenaline, juggling reams of constantly changing information while being deeply in touch with your creative wellspring and the needs of your audience? I challenge anyone who thinks it looks easy (including your GM) to do it truly well for ten minutes. Being a good announcer requires the imagination and skills of a good actor to enable you to "be yourself" on stage because you're actually giving a performance of the companion you are at your neighbor's kitchen table. Just remember, there are good actors and bad actors. To be the kind of announcer/friend your listeners will be really attracted to, bond with, and want to hang with everyday, you have to know your material. It starts with your tone.

Sound natural: The average announcer becomes a caricature of a DJ when he opens the mic. He uses a different voice and a different language. He cops an attitude. Why? Imitation, maybe. Or insecurity. Poor guy or gal must be thinking, "Gee, my regular personality couldn't possibly be zippy enough to satisfy this tough crowd." So, out pops a bad DJ impression instead. Fact is, today's listeners have acute bullshit detectors, and they'll tune you and your station out unless you get real with them. You'd actually do well to overestimate your audience -- treat them like intelligent human beings and they'll reward you with loyalty.

Get local: The winning stations in any market are the ones who do the best job reflecting the positive qualities of the market back to their listeners. The announcers are focused outward on the listeners and not inward on themselves. One of radio's great strengths is localism. Try putting your radio station to the "What City Is This?" test. Any combination of two breaks should reveal without a doubt that this station is broadcasting from Yourtown, USA.

Background information is critical to a good announcer because your listeners think you're an expert. They have certain expectations. And you fulfill them by going beyond USA Today and Letterman and really getting to know your core audience -- who they are, where they hang, what they like to do, what they talk about, what they eat, and what's important to them. Zero in on that. If your listeners think you go backstage after all the concerts, you meet all the stars, you know the whole story, then deliver. You want to satisfy their expectations while being real, being true to yourself.

I'll start this section with a true story. My old band did three nights in an LA club opening for Steve Martin. The first night, after we finished our set, I watched his comedy routine. It was so fresh and funny and spontaneous, I hurt from laughing. The second night he blew me away when he did the identical show, right down to his little throwaway lines. What a fake! What an imposter! What an actor! I felt I'd been had. The third night, when he repeated the exact same show for the third time, I was full circle back to hysterical laughter again. I learned a very valuable lesson about "planned spontaneity" from Steve Martin. He obviously knew what worked. He unreeled a carefully crafted routine one line at a time in a way that appeared to come right off the top of his head. Admittedly, he had a completely different audience every night, which you don't on the radio, so you can't repeat your jokes verbatim the way he did. But the lesson from this story is: learn what works and get a plan. Smooth your craft. Never turn on the mic and just fake it, wing it, or "let it happen." The guys who claim they can only work that way are lazy and undisciplined. While your last tune rolls, mentally walk through your break, one element at a time. Make a map of it, study it, and know where you're going. Not every little detail, of course, because you want to leave room to react to strange messages from inner space, but you must know your sequence of events.

Good announcers talk with (not at) one person at a time. Not a crowd. That's why you feel like you know them even though you might not recognize them on the street. Radio is extremely personal, and you can destroy the intimacy with fake attitude, with "staginess," with ego references to "all you people out there within the sound of my voice."

Respect your listener's time and be brief. Figure out what you need to communicate and do it with precision, speed, and color. Fewer, more powerful words leave a longer lasting impression. As an exercise, I once transcribed an entire show from my aircheck cassette and went through it with a red pen. Not to make it perfect, but to streamline it. I took out all the extra words, the repetition, the convoluted sentences, the nervous laugh when I said something that wasn't quite funny, all the little dead ends you get into when you're not sure where you're going. I didn't remove the personality, I just removed the fat. Then I read my breaks out loud again and realized that if I'd edited forty percent of the blah-blah to begin with, I would have delivered a much tighter, more entertaining show. Less filler, more meat. More meat means more impact. And impact is what you want. Winston Churchill was a pretty effective communicator. Here are his "rules" for writing a great speech:

Avoid slogans: Portland's Best Rock. More Variety, A Better Mix. Atlanta's Home of the Hits. Okay, speak 'em to please your boss, but I go on record saying that listeners don't respond to this crap anymore, if they ever really did. It all sounds the same. Really, how many "More Music" stations are there in your market right now? Now here's a great radio slogan for you:

When you make a mistake on the air, never go backwards and apologize. I don't care what it is. It's only natural to feel anxious and embarrassed, but then you only draw more attention to your error so even people who weren't paying attention to your error now know you screwed up! Just cut and run. Quickly correct yourself and proceed because in a moment all will be forgotten with the listener. I promise.

The only unnatural thing in your act is call letter and frequency repetition. In real life, people don't keep telling you their name and address over and over and over. Until Arbitron takes recall out of the ratings picture and makes the whole process passive with the new People Meter, you're required by the game to repeat your station's call letters ad nauseam so that somebody with a diary will know who to credit. Accuratings, the new competitor to Arbitron, did a survey recently which shows the average person listens to radio twenty-one hours a week. He/she uses an average of three stations, though his primary station accounts for a good seventy-five percent of listening. Now you would think that if someone spends well over two hours with you every day, they ought to know your name. Some do. Many sorta do. Many more don't. Never assume that people know which announcer or station they're listening to. But wait, doesn't this statement contradict my earlier advice to overestimate the audience? Not a bit. Just don't overestimate the importance of radio in their busy lives. Radio is our passion, but for most people, it's a utility like tap water. You want water, you turn on the faucet and water comes out. Hardly an intellectual proposition. The old model of radio says that folks know all the stations. They know which announcers go with which call letters. They love us and pay attention to our every little nuance. Hellooooo. The new reality shows a small raft of dedicated listeners in an ocean of casual users. You are a sound -- number two button from the left. That's not meant to demean you or the radio industry. Just sniffin' the coffee, that's all. Your listener wants immediate gratification -- relief from boredom, a mood shift. Your job as Portable Electronic Mood Service Technician is to serve it up, now.

As in "psych yourself up." If you watched the Olympics, you saw quite a few athletes rev themselves into a mental state before their event. You should be doing the same. In fact, if your pulse doesn't race, if your stomach isn't just a little flippy, you're probably not in the right business. Even Sinatra gets butterflies. The trick with announcing is to fix your focus on one imaginary person at a time. That helps you avoid the self-consciousness that comes from performing in front of a huge invisible audience.

So there you have it, a good four-step program for successful announcing. Prepare so you have the proper materials in your head before you walk into the studio. Rehearse so that you execute your breaks with the right elements in the right order with the right flow. Edit so your message is tight, punchy, and powerful; and Psych yourself up so you're ready for the red light. Sounds simple enough, and if you accept the discipline, it will be simple in time. Whether you're a Production Director or the number one morning announcer, that's the big picture of being on the air.

August 01, 2002 9241
by Steve Cunningham Why would anyone involved in radio production ever consider using a software editor with the word “Video” in its name? If the product is from Sonic Foundry, purveyors of the industry-standard Sound Forge...
Read More...
© 1988 - 2023 Radio And Production, LLC
Go to Top