It's always a treat to check in with yesterday's Production Directors and find out where they are today and how they got there. This month we visit with Dennis "R.D." Steele, yet another graduate of WEBN's "school of production." Dennis spent some time at WEBN in Cincinnati before winding up at WYSP in Philadelphia which was his last stop in radio before taking the big leap into self employment. Dennis now produces "John Madden's Sports Calendar," a syndicated sports program heard daily on over 150 stations; and his voice-over business is off the ground and doing well. Some of his voice-over clients include Kraft Foods, TV Guide, Pizza Hut, McDonalds, AT&T, Campbell Soup, and Cigna Insurance. Dennis shares some insights into syndication as well as some tips on making it in the voice-over business. Join us as we get a look at a former Production Director with a colorful resume and a bright future. 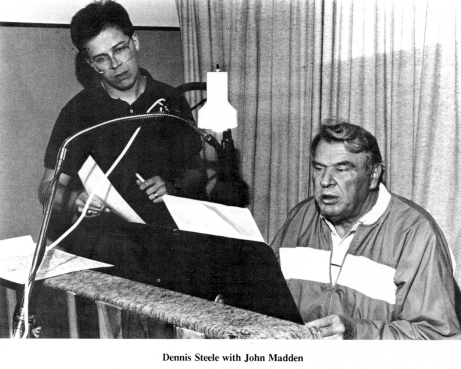 R.A.P.: Tell us about your background in radio.
Dennis: My interest in radio started at the University of Cincinnati. I wanted to be a film major, but I got into radio via Tom Sandman whom you interviewed recently. Tom and I went to the same high school together in Cincinnati, and he was the one who turned me on to UC when I was looking at colleges. When I got there he said, "You really ought to check out WFIB, the campus radio station." So I did. November of 1975 was the first time I was ever on the air anywhere for any reason. I was on college radio all through college. Then in '76 I got an internship at WSAI-AM, which was, at that time, a powerhouse top forty AM. I did midnight to six on Sunday nights for the entire semester. That was pretty cool. By the summer of '77, Sandman was the Production Director at WEBN in Cincinnati, sort of the nesting place of a lot of good production people. Tom called me up and said, "Hey, what are you doing this summer?" I was spinning records at clubs, working at a fast food place, working two and three jobs to try to pay off college. He said, "How would you like to work as my assistant in production?" My experience in production was campus radio. I had done very little. I got straight Cs in my audio production courses, and I was a total spaz at the technical side of production. But I said, "Sure! Of course!" Who wouldn't? It was the radio station I listened to, and I listened to it practically since it signed on in 1967 as a progressive radio station. So I worked there three days a week in production, and then I started doing overnight weekend air shifts.

When the summer was over I was supposed to stop and go back to school. But bad things kept happening to people on our air staff, like our Program Director blew out his knee at a company picnic and couldn't get his cast under the console, so they needed jocks to fill his slot for six weeks. I got to fill in doing production while other people were doing air shifts. Then something would happen to somebody else, or somebody would go on vacation. I hung around at the station for the next fourteen months and basically got a regular weekend air shift. I became sort of a fixture around there.

Bo Wood, the General Manager, helped me scam a co-op out of it. I ended up getting twelve credit hours for working there, and I don't know if I would have graduated if I hadn't received that. Anyway, it was just an incredible place to work, and I basically learned everything about radio and about production and theater of the mind while I was there. It was a great experience from top to bottom. It was terrific for a young guy -- twenty, twenty-one years old -- to go in there and meet rock stars back stage at concerts and all the stuff that was a bonus on top of the incredible learning experience.

But all good things come to an end, and when I got out of school, there really was not a full-time job for me there. I sent tapes everywhere. Then a friend told me there was a start-up operation in Des Moines, Iowa. KGGO radio in Des Moines was going from Paul Drew Top Forty to an Abrams Super Stars formatted FM AOR station. I packed up my Pinto wagon and all my earthly possessions, and in August of 1978 I moved to Des Moines, Iowa as Production Director for this new station. That was a real trip because Des Moines was a very strange market in terms of rock radio. They had an AM AOR station that was very well thought of, and they had a cable FM progressive rock station. We were the first FM AOR station in the market. Des Moines is the biggest city in Iowa. It's a town of about 300,000 metro, and it's the state capital. There's Iowa State University, and there's Drake University. There are all these college students and all this activity, a lot of concerts. They have a big State Fair, too. It's a really great place. I was Production Director, I was Music Director for a little while, and I did nights for a while. I sort of completed my Masters degree here at KGGO. You know, my undergrad work was at 'EBN, and my post-grad was at KGGO.

KGGO had an AM station, too. The AM was KSO, Great Country, and they were the big country station in the state. Here you had all these jocks who literally wore cowboy hats and bolero ties. I'm serious, and they would have chili cookouts in the lobby on Saturday afternoons. Then down the hall there were these long-haired, bearded guys playing album sides. There was a real culture clash there. This was also the only radio station I ever worked at that had a swimming pool, and it was there for our use -- the whole two weeks that it was warm enough to go swimming. It was a wild place, and the management really didn't know that much about rock and roll and what we were trying to do. So we got away with a lot of things. It was still really getting off the ground when I left.