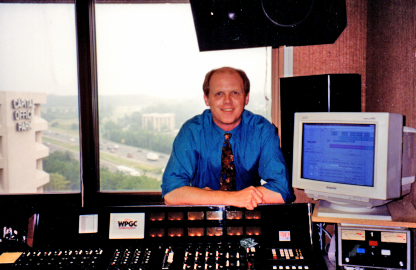 The country's 8th largest market is where you'll find WPGC-FM, a true powerhouse radio station with numbers practically out of reach of the competition, or anyone reaching for the top slot. The Production Director at this station is yet another graduate of Boston AOR radio, having spent nearly seven years at WBCN as a morning show producer and production assistant. Rarely does one find his or her first Production Director's gig in a top ten market, let alone at the number one station in that market. But that's Bob Holmcrans' story. Join us as we find out a few secrets to Bob's success, and the success of WPGC.

R.A.P.: Where did you get your start in radio, and how did you wind up at Washington's number one station?
Bob: Back in '78 or '79, I was actually sitting in the ruins in Athens, Greece, contemplating my future. I thought I was going to go to graduate school when I got back to Boston from my European travels that summer. I got a job as a waiter to pay the bills, and I started taking a course or two towards a graduate's degree in American Studies. I needed a diversion, so I went to WBCN, which was my favorite station. I knew a lot about rock and roll, and I started answering telephones for one of the disc jockeys just for the fun of it. After a couple of months, I started looking around and noticed that these people were actually making money, having fun, and playing rock and roll. The academic world didn't seem to be that appealing to me anymore. One thing led to another, and I became an intern for Ken Shelton who was the mid-day guy there. I loved it. It was a fascinating hobby to me at that point.

Tom Couch was the Production Director at that time, and I asked him if I could be his intern. I veered into that. It was tough for me because I wanted to get a career in radio, but I was interning at 'BCN in Boston which was a major market, and this was not the type of place where you could get on the air right away. Ken Shelton, who is my mentor, said to me, "Bob, you've got to pick up and go to Vermont, to a little town somewhere, if you want to be a DJ." I didn't want to leave the city, and I was torn. Eventually, after being the intern for years there, Charles Laquidara, the morning guy, asked me to produce his morning show. That show is called The Big Mattress. I was really honored. I had put a lot of time and energy into the station, and this was an opportunity for me to actually have a paying job. It didn't pay that much, but it was a springboard.

So, I was Charles' producer for about a year and a half, and during the latter half of that I left the on-air studio to go into the production studio to work on bits with Billy West, who was the creative guy for The Big Mattress at that time. I did that for a little while.

A friend of mine who had done the production part of the morning show before me was now the Production Director at WZLX in Boston. His name is Mike Coleman. He called me up and he said, "Listen, the company I work for has a station in Washington, DC and needs a morning show producer. Call Ben Hill, the Program Director." So I did. I went down there, and I got a decent paying job. It was WCLY at the time, an adult contemporary station which was 19th in the market. It was a far cry from the glory of 'BCN, but I finally had a job that paid enough that I didn't have to be a waiter at the same time to support myself.

About six weeks after I was there, Ben became General Manager and hired Jerry Clifton as a consultant, and they decided to change the format to what it is now. WPGC had been a top 40 station back in the '70s and early '80s and very successful at the time. They realized that being WCLY, doing adult contemporary, was just not the way to go, so they changed back to the old call letters and did an updated version of top 40 which they called Contemporary Crossover, an Urban/Top-40 crossover type of format. So there I was, a fish out of water, in a format that I knew nothing about. The personnel at the station was changing daily. New DJs were coming and going, and I thought, "Well, what is going to happen now?" Ben pulled me aside and said that we needed a Production Director. He thought I would do well at it. He offered me the job, and that's how I ended up where I am. That was just over seven years ago, and I'm very proud to say that I'm a part of a team that has taken the station from nineteenth in the market to number one.

R.A.P.: That's quite a story -- your first Production Director's gig, and it's at the number one station in Washington, D.C.!
Bob: It's kind of neat. I have only worked at two radio stations in my life, one as an intern basically. 'BCN was a monster of a station, and now I am very happy to say that 'PGC has attained equal status.

R.A.P.: That's incredible. What do you attribute this success to?
Bob: I really think it was teamwork based upon Ben's vision of what he wanted to do. He is a great people person. He believes in the product of programming. He came up to General Manager through programming which is something you don't find that often. He believes in setting goals: this is where we want to go, and we are going to get there. We are not going to follow any conventional rules. We are not going to listen to what other people say. We are going to do it ourselves, and we are going to do it with teamwork.

As you know, in radio, there are egos that pop up here and there. We all have them, and sometimes they can be difficult to deal with. But I really feel that through the years we have developed a family atmosphere around here, a real good teamwork type of thing. And our people are dedicated. They're not afraid to wear two or three hats. If they need someone to go down and stand at the door to collect tickets after a promotion, well, you go down and do it. There's a lot of that type of thing around here.

So, I'd say our success is due to Ben's vision, having a real hot consultant in Jerry Clifton, and good Program Directors. Right now, Jay Stevens is our guy. He has been here for four or five years now, and he has taken us to the top level. We did it with good leadership, team spirit, the proper direction, and attainable goals. Take it just one step at a time, and don't listen to people telling you you can't do it. That's how we did it.