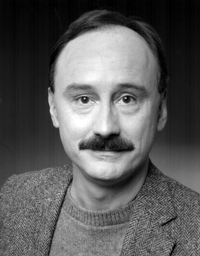 The book is called "Advanced Audio Production Techniques." Its author is a 20-year veteran of radio and other related industries. He has been a Production Director, Program Director, Chief Engineer, Operations Manager, and disk jockey for a number of stations, and now runs his own production company. He also writes a monthly column for Radio World and has most recently edited and revised the NAB book "Guidelines for Radio Copywriting." The revised edition is expected to be available this month. Join us for a visit with the first Production Rat, and a look at a book about audio production written by a man who knows our business and speaks our language.

R.A.P.: How did you get in and out of radio?
Ty: My earliest remembrance is at the age of nine. I spent a summer in a very small town in Virginia with a woman who had a small boys' summer camp. She took me to the local radio station, and I was fascinated by it. We got the tour and left. As we were driving away she said, "What did you think of that?" And I said, "Well, I'm a little upset because I didn't get to say anything on the radio." She stopped the car, turned around, went back to the station, went in and talked to somebody, and the next thing I know, I'm sitting in what appeared to be a news booth. Somebody handed me a station ID to read, and they recorded it. Then, as we drove away, they played it on the air. I think my life was different after that.

I had a continuing fascination with electronic things through high school. I spent a year at the University of Maryland. I couldn't figure out what I was supposed to be doing there, but I figured out that I wanted to be in radio. By 1969, I'd been through enough schools and had taken enough tests to get the first class license which was needed then. I started to work at an AM daytimer in Laurel, Maryland, one of the Maryland suburbs of Washington, D.C.. After three months there, I moved on to the capital of Maryland, Annapolis, and worked there for a year at an AM/FM combo. Then I started work part-time in Baltimore in '71 at a progressive AM station, WAYE, another daytimer. I spent a year there. I went to full-time, became Production Director and then Program Director. I left there to go to Washington, D.C. to work at WHFS between '72 and '75 where I was morning person, the Production Director, and Chief Engineer. Then I went back to the first station I ever worked for in Laurel, Maryland where we put a progressive country format on the air.

From there I went to WIYY in March, 1977 when it went from news and information on FM to a Burkhart Abrams AOR format. I was there till '86 on the air, and I had also been the Operations Manager and Production Director. I've been a Production Director everywhere except at the very first station when I was just trying to figure out what the knobs were. I always enjoyed doing all of this, and it took me years before I realized that I was one of the few people who, after they got off the air, loved to go into the production studio. I was in there working away and didn't catch on that most everybody else was hitting the front doors when their air shift was over.

In '86 radio changed. I was changing, and radio wasn't the place for me to be. I had offers to go to other markets to work in radio, but I thought, "I've worked all my life in the Baltimore/Washington area, and I probably have built up some name equity in the market. I should now try to trade on that equity and see if I can make a living doing freelance voice work and/or production of some sort." I asked around, and there are a couple of guys in town who make around $250,000 a year just doing voice work. I thought if I can be one-fifth as effective as they are, I'd make a really good living. So I went after it. It's very tough to break in. People don't even know you until you've been around long enough. Fortunately, there were some people at agencies who had heard of me, and they let me come and talk to them.

Little by little and bit by bit I built up a client base. And as I did that, I began writing for Radio World. That turned into a steady gig of a monthly article about audio production gear and the effect started to multiply. I was then in a position where I could call the equipment manufacturers and say, "Gee, what is this Aphex Aural Exciter all about? Why don't you send me one? I'd like to write an article about it and hear what it sounds like." That put me in a wonderful position to find out what good equipment was out there and what equipment I might need to put into the studio I was building to do voice work.

R.A.P.: How did the book come about?
Ty: I got a call about two years ago from a gentleman by the name of Michael Keith who, at that point, had written three books for Focal Press and was also a professor. He said, "I'm working on the fourth book and part of this chapter is about audio processing gear. I read your articles a lot. I like your style, and I wonder if you'd consider writing that portion of that chapter." We discussed it, and I wrote it and sent it in to him. About three days later I got a call from Focal saying, "Hi, want to write a book?" And I'm like, "Well, I really hadn't thought about it."

When I started writing for Radio World, I was writing in longhand on a legal pad. Then I used my manual typewriter to put these articles together. It was really painful. I quickly got into Macintosh computers and found that the average article I was writing was about 1,000 to 1,200 words. I got so that I could do them pretty easily. At first it might have taken a whole week to do something like that, but now I can usually sneeze 1,200 words in a day -- on a good day. But a book? That's a whole different thing. I said, "Let's talk about what we need to do," and they sent me some of their books on the subject.

I called them back and said, "Here's the problem. I see a need for a book that isn't written by an engineer and isn't written by a teacher. There are two different biases there, neither of which is necessarily easy to understand by the people who are actually doing the work in the production studios at the radio stations. The engineering perspective requires that you learn that particular language and vocabulary and perspective, and that you can relate concepts through formulas. The academic approach is very theoretical. It has something to do with formulas sometimes, depending upon who is doing the writing, but it's not well founded in application, and that's what I see a crying need for."

We spent the next three months hashing the outline out, and then I started to write. The whole project took me a year and a half. It's very hard to write like that, for me anyway. I'd much rather sit down and write a spot.

R.A.P.: The first chapter of the book is "Developing Golden Ears." What is this chapter about?
Ty: This chapter covers the hearing process and the concept that everybody hears, but the production person processes what they hear in a very specific way. They listen much more differently than anybody else I'm aware of. The chapter talks about how the ears work, what the frequency spectrum is about, and it gets into practicing visualization. You have to be able to identify lots of different kinds of distortion. Maybe some distortions are in there by accident. What caused them? How do you deal with them? As a production person, you're much more aware of small changes in volume level. You should know the effects of masking, what frequencies may interact with others. You need to know textures and how the different frequencies of different instruments interact with each other, and that includes the human voice if you want to count that as an instrument. It goes from there into more of a theoretical explanation of starting your spots with a concept and knowing, as you get into that particular piece of production, how it's going to work out.

R.A.P.: The next chapter is "Advanced Listening." What's covered here?
Ty: This chapter deals more with a hands-on approach of the environment of a production studio, and there's a bit of work in there about studio and control room acoustics -- what to listen for, how that listening should be focused, how monitors can color the sound. There are very many different ways you can set up your monitors physically, and that can change the way they perform, change their frequency responses. The chapter discusses how to set up a proper stereo image and how to recognize when you're in a studio with monitors set up in such a way that you really can't tell what's going on, either by virtue of the way they're mounted or the way they're joined with the power amplifier.

I go into things that not too many people in radio have run into, but I've brought them into the book because I've seen it happen in larger studios. For example, the concept of console reflectance, where you listen very carefully to the sound coming out of the monitors, and, because of their placement, some of that sound is bouncing off the console and into your ears slightly after it gets to your ears from the monitors. That can do a lot of different things. It can change the frequency response. The delay will usually smear the stereo image and make for a very bad monitoring environment.

One of the biggest problems I have run into over time has been the problem in which a channel of audio may be out of phase with the other. It's amazing how frequently that pops up, so I talk about that. One of my golden rules is probably "check everything in mono before you go out the door." The chapter gets into acoustic noise, describing the different kinds of noise, and what things can cause these kinds of noises, whether it's popping Ps, noisy mike circuits, internal electronic noise, or noise that's the result of bad gain balancing. An example of that is when you've got the output of one stage of electronics turned up too high that it gets into its distortion area then feeds the next gain which is the input of the next stage which is turned way down so that it doesn't get overloaded. It's a good idea to go back and balance those gains by turning the output of the one down and opening up the input of the other a little. We talk about external electronic noises, RF sources -- just giving people an idea so that as they continue to listen and identify noise sources, they can pick up clues as to what's wrong and how to fix it.

October 01, 1999 7803
by Steve Cunningham Multitrack DAW software keeps getting, well, bigger. Sixteen tracks! Sixty-four tracks! Two-hundred-eighty-two-and-a-half tracks! This is all well and good, but most of us spend our time working with good old...
Read More...
© 1988 - 2023 Radio And Production, LLC
Go to Top