For radio production, one of the primary things to look for in a workstation when you're try to narrow the choices down is its ability to be grasped quickly by the people at your station. One of the nicer features of the Pacific Recorders ADX Production System is its short learning curve. If your station doesn't have three or four production rooms, you can't afford to have one sit idle while the production person is out sick or on vacation. You want to have a unit that almost anyone can learn with a few hours' training and a few hours' practice. The ADX fits that bill.

The ADX also has what I like to call "Expandable Learning." It isn't difficult at all to get up and running on the ADX for basic production tasks; yet, as you advance on the machine, the software seems to grow with you at your pace. As the basic commands become effortless and second-nature, and you're ready to take on more involved production tasks, the software is user-friendly enough to make the transition to the next level with ease. As a matter of fact, the software has an exceptional amount of versatility. And it's this kind of versatility that's necessary for a digital workstation to make it in today's broadcast production studios.

The ADX Workstation is enclosed in a roll-around case that houses everything. (It's about the size of the average roll-around analog multi-track deck.) There is a control panel on the front with the most commonly used functions including the usual play, record, fast-forward, rewind, and safety buttons, just like you'd find on any analog deck. Plus, there are some of the more frequently needed controls for editing. Just below the control panel is a scrub wheel, mouse, and a work area. The keyboard for the unit is conveniently stashed under this front panel where it stays out of the way until you need it for naming sound files, mixes, and the like. Underneath the computer workstation are the "brains" of the operation -- the hard drives, A/D and D/A converters, AES/EBU inputs and outputs for each of the eight tracks, and optional Magneto Optical Disk Recorder for convenient back-up.

The ADX WorkStation features complete 8-track recording/playback and editing capabilities. You get on-screen waveform editing, standard cut/paste and splice functions, and automated punch in and punch out. You can fade in, fade out, crossfade, and loop. Move sounds around easily within a track or from track to track. And when you make mistakes, the ADX's "Undo/Redo" control quickly takes back your mistakes. Along with the usual transport controls, the integrated control panel of the WorkStation features a full function autolocator and time code display. Each channel has individual Monitor, Solo, Mute, and Record Enable buttons. Recordings are made directly onto the hard drive and are saved as "Sound Files." You can then bring them into a "Mix" where you can name them, manipulate them, and move them around on the screen with easy to use icons.

The computer that drives the ADX WorkStation is a MacIntosh with eight megabytes of RAM, a forty megabyte hard drive, and a sixteen-inch color monitor. The 1.6 gigabyte audio storage unit provides four track-hours of recording time at a sampling rate of 44.1kHz. The storage unit is expandable to sixteen track-hours. The ADX comes standard with eight tracks, but can be expanded to sixteen, twenty-four, or even thirty-two tracks. It also features a SMPTE time code generator/reader and MIDI interface.

The system utilizes a RAM buffer that takes the sounds from the storage unit and stores them in RAM, ready to be played and edited instantly. This is an extremely efficient way to run a digital system because you only have to access the hard disk once. When you re-record the sounds into "Mixes" or "Edits," all you store is the edit information, not the original sounds again. An obvious advantage to this way of information management is that you don't waste precious hard disk space with your mixes. There are several systems on the market that require you to save your finished work as edited sounds which duplicates much of the audio already on the disk and uses disk space rapidly.

The RAM buffer is also used to let you hear all eight tracks playing back at once. It works by sensing where you are in your current project and then calling up the "Cues" (one individual sound on an individual track) in both directions (forward and backward) and storing them in RAM. This is basically a method the computer uses to make sure that if you rewind, play, fast-forward, or scrub the "tape," all the sounds on all eight channels will be ready to be played.

One of the features that I found enjoyable about the screen presentation was the "Mix View" window. This window lets you read the mix vertically, not horizontally. At first glance, it made me take a step back, probably because most other systems show the mix horizontally. As I continued to use the machine, I realized that this was much more pleasant than the horizontal method. Whenever I do mixes, I always picture in my head where each fader is going to be in relation to the sounds on the individual tracks. To actually see the sounds in color, and even named in this fader-type format, is a definite plus.

When doing any editing, the "Edit" window shows the waveform in the horizontal position which I feel is the best method for this function. You can edit your piece exactly the way you want, name it, and then place it on any channel, anywhere in the Mix. With the Edit window, you also have the option of zooming out to see the whole sound file or zooming in to see however small a section you might need to view.

The other part of the ADX system is the ADX Mixstation. This unit is optional. As mentioned, it is basically a set of eight multi-track console modules which are designed to be mounted into the Pacific Recorders ABX or Productionmixer consoles. The WorkStation will function without the MixStation, but if you already own one of the two mentioned PR&E consoles, the MixStation is one heck of an option that interfaces the ADX WorkStation with your Pacific Recorders console. Each channel features parametric EQ, pan, effects sends, solo, channel on/off buttons and more.

The MixStation also gives you "snapshot" and "dynamic" automation. You can take each Cue recorded on the WorkStation and mix it independently of everything else on the other channels. The MixStation will recall exactly what you've done to that individual Cue because it's "touch sensitive" and stores the information to a dedicated hard drive. As you adjust a fader or pan the audio, the level and pan information are recorded. This touch sensitive feature is about the coolest thing I've ever seen in a production studio. When you play the piece back, the motorized faders fade, and the pan pots pan. And there are two 8-character displays on each channel that tell you the name of the sound you're listening to and the name of the sound that's coming up next. And remember, you can save your final mix with your work, so if you have to come back to it later, there's no need to have to re-mix the entire session. The ADX MixStation is unique in that it is perhaps the only product available that totally and effectively integrates your ABX or Productionmixer console with a digital workstation.

If you're going to take that plunge and go digital, you'll want to check out what Pacific Recorders has to offer with the ADX Production System. They can help you design a great production studio for the 90s and beyond. (Oh, by the way, when you see their equipment at shows and in magazines or brochures, they make all of those really nice studio cabinets themselves.) The ADX WorkStation lists for $33,980. The MixStation is tagged at $19,450. 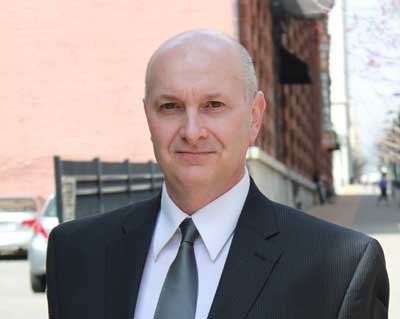 February 28, 2019 1595
Nothing better than a story of a radio production director leaving the corporate radio gig to find success out on his or her own. Tim Burt has one of those stories. We get the lowdown on the success he's finding sharing what he...
Read More...
© 1988 - 2022 Radio And Production, LLC
Go to Top