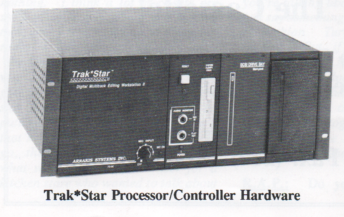 Trak*Star is the new family of digital production software programs from Arrakis Systems. These programs are designed to run on the basic Arrakis digital workstation which runs the popular DigiLink software and other broadcast oriented programs. This month's Test Drive is on the Trak*Star-8, just one member of the Trak*Star family. Though capable of being interfaced with other Arrakis broadcast systems, the Trak*Star-8 also functions as a stand-alone, disk based, 8-track digital recorder/editor.

What is initially most obvious about the Trak*Star-8's software design is the effort made to create perhaps one of the more user friendly interfaces available from a digital multi-track system. Many digital workstations send you through several screens to perform basic 8-track recording and editing, but the Trak*Star-8 has one main screen from which all functions are accessed. This main screen consists of two columns of "buttons" located on the left and right sides of the screen. The center portion of the screen is the only part of the screen that changes to any great degree with each function selected, but the columns of buttons remain on the screen. The lower portion of the screen provides other "soft" function buttons as well as the familiar "tape transport" buttons. The upper portion of the screen furnishes time indicators and a waveform window for viewing and editing. Working from this same screen at all times results in rapid familiarity with the system and its various functions.

The first "button" in the upper left portion of the screen is the Sessions button. Clicking on this button displays a list of pre-recorded multi-track sessions, and you're given the choice of starting a new session, saving a current session, loading an old session, or deleting an old session. Sessions retain their multi-track characteristics. If you're working on a promo and get interrupted halfway through your session, you can save the session, then load it back with all pieces and tracks as you left them.

The next button is the Record File button. Clicking this button engages the unit's record function. After clicking the Record File button, you are prompted to select a Category from the column of buttons on the right side of the screen. Your choices are: Music, ID, Jingle, Liner, Effect, News, Promo, PSA, and Spot. These "categories" are nothing more than computer file "directories." This is the Trak*Star-8's file management system. There are also three buttons labeled "Reserved." Only one of these is accessible. The other two are probably there to satisfy future upgrades.

November 01, 2007 3571
Jude Corbett, Voiceover Artist, Chicago, IL Not too long ago, Jude Corbett was a production guy at a station in Terre Haute, Indiana, but paying “small market dues” wasn’t going to take him very long. Jude quickly raced up the...
Read More...
© 1988 - 2022 Radio And Production, LLC
Go to Top