It's here. Another recording format. Another replacement for the aging analog cassette. Digital Compact Cassette. There is a ton of money to be made if one can capture the current analog cassette market with a digital replacement. DAT attempted this a few years ago, but met with poor results due largely to the "copy protect" question that has now been resolved with the SCMS (Serial Copy Management System) which prevents making multiple digital copies of a digitally recorded DAT or DCC. (Even though DAT didn't live up to expectations in the consumer market, it still enjoys wide acceptance in the broadcast and recording fields.) DCC is attempting to do the same thing DAT tried, only this time, the timing is right and the DCC deck's compatibility with analog cassettes lends itself to greater consumer acceptance. 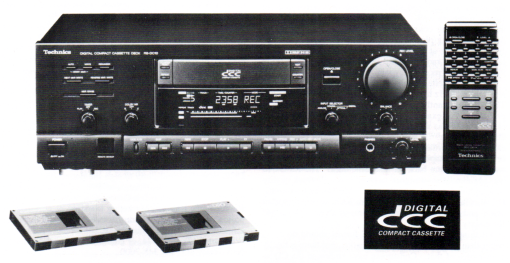 On the surface, the DCC format is very similar to DAT. They both offer high quality, digital recording to small cassettes. The decks for both formats offer the same basic features including various sub-code functions, extensive "time" displays, standard transport controls, etc.. However, as you look more closely at the two formats, the differences become more evident.

To begin with, the DCC cassette is roughly twice as large as the DAT cassette. In a technology where smaller is usually better, the larger DCC case is better from the consumer standpoint because it is identical in size to the conventional cassette. This was necessary in order to make the deck itself compatible with analog cassettes -- playback only. The cassette tape is sealed in much the same fashion as 3-1/2 inch floppy disks are, with the sliding metal door. The DCC cassette boxes are of a more modern design but still fit perfectly in a conventional cassette rack or holder, thus allowing those beloved consumers to keep using their old cassette racks.

Another major difference between the two formats is that DCC uses data compression. Data compression algorithms are used in many digital recorders to provide greater recording times on the same amount of storage space. There are several algorithms in use, some providing greater compression than others, and they all claim to provide quality, digital recording virtually identical to conventional PCM encoding or "CD quality." For the DCC to be affordable and compatible with analog cassettes, two things needed to happen: 1) the tape speed needed to remain the same at 1-7/8 ips, and 2) the heads needed to be stationary. With DAT, the tape moves much more slowly and the heads rotate, enabling more data to be applied to the same amount of tape. To compensate for this limited space for digital data, the DCC utilizes the PASC (Precision Adaptive Sub-band Coding) data compression algorithm to reduce the amount of digital information to be stored. There are some that say they can hear the difference between the DCC recording and the CD source. I couldn't. It seems the bigger question about data compression isn't one of quality, but one of concern about what happens when audio is passed through several different compression algorithms. Recently, some extensive, independent research was done on this subject. At press time, the results were not available, but we hope to have something for you soon.

Several models of DCC decks lined the shelves of audio stores across the nation as the Philips/Matsushita developed product did its best to receive a warm welcome from that large and very attractive consumer market. No doubt, some lucky audiophiles found a new DCC deck under their tree during the holidays. Under our scrutiny we found the Technics RS-DC10 DCC deck.

This particular model is priced at $999.95 and is the first DCC deck from Technics/Panasonic/Matsushita. We'll begin our tour with the front panel. At the top left are the sub-code function buttons. What DAT calls Start IDs, the DCC calls Start Markers. The AUTO button enables automatic writing of the Start Marker at the start of audio input or when the unit is put into the record mode from the record/pause mode. (During recording with digital inputs, the RS-DC10 uses the track number sub-codes of the DAT or CD to trigger automatic Start Marker writing.) The WRITE button is used to manually write the Start Marker when in the Manual mode. The RENUMBER button offers the same function as DAT's renumber function which rewinds the tape and renumbers the Start Markers beginning with number 1.

September 01, 2003 12743
by Steve Cunningham There’s something just plain handy about a stand-alone CD burner — that is, one that’s not part of a computer. A self-contained CD recorder into which you can plug microphones, with input level controls and...
Read More...
© 1988 - 2023 Radio And Production, LLC
Go to Top