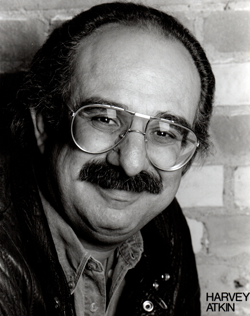 He has been seen or heard in more than 4000 commercials for radio and television. He is a master of accents and dialects, speaks French, Italian, Hebrew, and Yiddish, and has hundreds of imaginary characters and animals in his head and on the tip of his tongue. He has been in a number of feature films, films for television, and television series, too numerous to mention. You may recall a promo from Joel Moss/WEBN on the December '92 Cassette which featured Harvey Atkin's voice talent (see "On The Cassette," Page 15, Dec. '92 RAP).

Harvey's acting background is extensive and spans decades, but most recently, Harvey has begun to pursue the voice-over business, like many actors these days. This month we visit with Harvey and get some insight into the lucrative voice-over business -- what does it take to get into the voice-over biz and stay in? What part do talent agents play? What does it take to become a "voice actor?" We tackle these questions and more! Join us for an informative and all around enjoyable chat with Harvey Atkin.

R.A.P.: Your voice-over career began in the Canadian market. How did you get into the U.S. market?
Harvey: I went south of the border when I was doing some film work. My agent called me in one day for an audition. I got a call back two weeks later from the producer who said that they couldn't understand why they brought me in to read this particular spot because I was absolutely wrong for it! However, he loved my voice, and he said he had something coming up for me later. About four months later, the guy calls me up. His name is John Sarley. He asked me to do this Jack Webb kind of delivery for a company called Murata Pearls. After I did the spot, he wouldn't tell anybody who the voice was; I was his discovery. Anyway, this Murata Pearl spot went on to win the Southern California award for humor that year. Then I started doing a few other things for him. I did the Nationwise ads, and then he called me down to do Bally's International and a couple of other major deals. So, he's the one that really started me off, but he has very scrupulously avoided telling anyone who I am. I think I've received three or four Clios working for him in the last three or four years, and the Nationwise Auto Parts stuff won "best" for a lot of things at the Clios. So, my name is starting to get around.

R.A.P.: Is the Canadian voice-over market as big as the States'?
Harvey: A lot bigger checks come out of the U.S.. Take a look at the market. If you do a national spot here, you're talking about a market penetration of over 25 million people. Do a national spot in the States, and you're talking about a market penetration of 280 million. That's a ten to one ratio! Your residuals reflect that! There are more people in the Los Angeles area than there are in all of Canada.

R.A.P.: How many different accents do you do?
Harvey: I probably do twenty to twenty-five well and a couple others not as well. I won't do them on tape if they're not good. We're talking about English, Irish, Scottish, Wales, etc.. I can talk like I'm from Dallas, or I can talk like I'm from West Texas, which is a whole different accent altogether. I remember talking to one guy and recognizing his accent. I said, "Are you from Lubbock?" He said, "Hell no, I'm forty miles from Lubbock!" That's a true story! I've been married now for thirty years. I remember times, even before we were married, when my wife and I would go out for dinner at a restaurant, and the waiter would talk with an accent. After he'd take the order and leave, she would say, "Okay, where's he from?"

R.A.P.: And you'd be able to get pretty close?
Harvey: Yeah. I've got a fairly extensive library here, both on tape and record, and books on how to speak the English language with a bunch of different accents, going all the way from Hungarian to South Africa to the Islands to Great Britain.... But, I don't want to get stuck on this accent thing in the voice-over business. The difficulty is that the call for an accent doesn't come along that often. When they do, they're usually in a humorous spot, and if your accent isn't right bang on, the spot falls. Usually, the people that get called for it are the people that the guys know are able to do the accents, not somebody else that thinks he can do it.