10100010000100001000010001...(and so on). That's your CD player talking. In fact, your CD player is basically an "audio computer" that calculates sound "values" in a similar way a bank's computer calculates transaction values from its digital data. Where the bank's computer always outputs the exact sum of money, the CD player always outputs the exact original audio signal, with no additions, no losses. It's total accuracy, and that's digital. 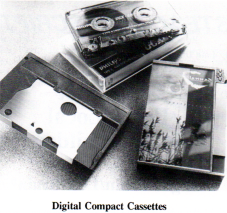 * Sound recording on tape is digital, and comparable to that of the Compact Disc.

* The cassette and deck mechanism are based on the Compact Cassette standard.

* DCC tape and head configurations are based on PASC (Precision Adaptive Sub-band Coding) achieving a dynamic range of 18 bits or 108 dB, and a total harmonic distortion, including noise, of 92dB. Frequency range from 5 Hz to 22 Hz can be handled.

* DCC operates with sampling rates of 48, 44.1 or 32 kHz, depending on the digital source signal. 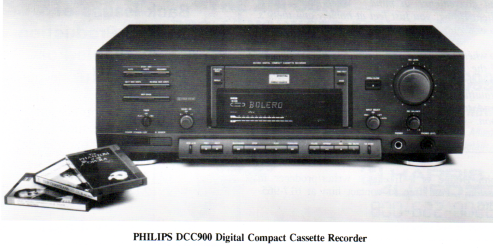 DCC's launch will also have the incredible support of many major record companies including Polygram, MCA, Warner, Capitol-EMI, BMG and Virgin. From AC/DC to Andrew Lloyd Weber, it'll be there. Plus, blank tape from Philips, TDK, Scotch and BASF in varying lengths, including D-90.

Predictions anyone? Frans Schmetz, Vice President of Marketing for PCEC (Philips Consumer Electronics Company) told RAP, "We are on target on all fronts to deliver the most important audio product since the compact disc."