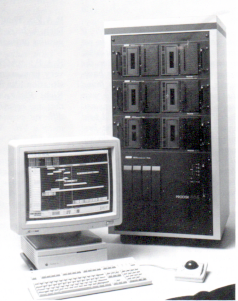 For most people in radio production, digital workstations are nothing more than nice pictures in the trades, hopes for a brighter future (probably at another station), or maybe a passing promise from management to someday "upgrade...if the ratings get better." (When the ratings ARE better, isn't it usually something else that gets upgraded?) But let's not dwell on the insufferable plight of the forgotten Production Directors of America. Out there in radio production paradise, and sometimes in the pages of RAP, we hear about many who are working with TODAY's tools. In fact, this month's interview with DSE-7000 user Rich Van Slyke is a good example. And while AKG is doing very well with their DSE, future voyagers into the realm of digital workstations should pay close attention to Otari's ProDisk 464 as it begins to make inroads into the broadcast market.

About a year and a half ago we reported Otari's purchase of the 464 from Digital Dynamics. At that point, the 464 presented itself as an awesome disk-based, Macintosh driven, digital multi-track machine, expandable from four to sixty-four tracks. And, at the time, the unit probably had many homes in post-production suites for film and video and large recording studios. But as an Otari product, the original 464 proved to be nothing more than the groundwork for what was to become an even more powerful machine with a more friendly user interface. Otari had plans, and changes were coming.

This Test Drive is unusual in the sense that we're catching the 464 in the midst of these changes. When we received the machine, it came with new "test version" software. This particular software version isn't even in the hands of current owners of the 464 yet! Only about a half dozen "beta sites" are using it. We also received the old manual for the original software and the new manual for the new "GUIDE" software. After spending a couple of days with the manuals, we contacted Otari's Product Specialist Matt Ward to ask a couple of questions about the new software. Matt said, "Wait. We've got an even NEWER version of the GUIDE software ready. Let me overnight that to you!" So, we get that package, install the new software, and continue. And just to drive home the point about the changes the 464 is going through, when the unit was picked up about a week later, we were told of another, even NEWER version of the GUIDE software. Bottom line: the Otari techs are very busy updating, upgrading, refining, and optimizing this new software for the 464. But there's more.

July 01, 1996 17732
by Jerry Vigil The MiniDisc format has been around for several years, but it hasn't yet captured the consumer market as planned. Call your local music store and you might find it difficult to even locate prerecorded MDs, let...
Read More...
© 1988 - 2023 Radio And Production, LLC
Go to Top