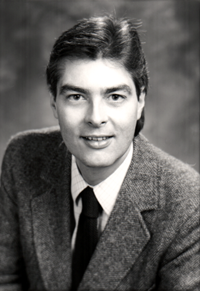 He does voice work for the CBS Radio Network. He's the booth announcer for KMOV-TV Channel 4 in St. Louis. He hosted Hot Hit Video for over two years, a show that was #1 for a year, beating Saturday Night Live. He has worked in a recording studio. He's been a top rated jock in St. Louis. He's programmed radio. He owns a graphic arts and production company called Van Allen Communications, and he owns a couple of radio stations. This month we take a look at a fellow producer who feels production is "the place to be," and we get a glimpse of a news/talk station in the country's 18th market that won't let ANYBODY get even remotely close to beating them.

R.A.P.: Give us a rundown of your background in the biz.
Casey: I started in St. Louis, and I've always lived in St. Louis. I'm one of the fortunate people that has never had to leave the marketplace. While going to college I worked at a top 40 radio station, KIRL. They were beating the powerhouse top 40 station in town, KXOK, a station I always dreamed of working at.

When I graduated from college, I went to be the Chief Engineer, Program Director, Chief Cook, and bottle washer at a radio station just outside of St. Louis in Granite City, Illinois, WGNU. I worked there for a short period of time, then an opening came up at KXOK. I went to KXOK as a disc jockey. This was back in 1970, I believe, and KXOK was still a real powerhouse. FM hadn't taken a hold quite yet. I had a real fun time there for a number of years.

While I was working at KXOK, I was still living at home with my parents. I was making the union dollars at a big station, had no expenses, drove a sports car, and had money to burn. So, I built a radio station at the Lake of the Ozarks which is in central Missouri. I owned it for a number of years and ran it while I was still working at KXOK.

I then went to program KADI in St. Louis. It was a soft rock station. I got a little burnt out on radio, so I went to work at a production studio called Track Masters Recording Studio which is where I got my real knowledge in doing great production. Coincidentally, the studio was located two blocks down the street from Anheuser Busch, where they brew that fine beer. As a result, we got about ninety percent of Anheuser Busch's recording business. We did just about all there commercials.

I then got an opportunity to work for CBS at KHTR. It was KMOX-FM at the time. After a while, we were all saying, "Hey, this thing needs to go CHR. Let's do it! The time's right! The hole is there! Let's jump in it!" So we did. We took the thing CHR, changed the call letters to KHTR, and it zoomed up the charts. We were the number two station at the time behind KMOX-AM. It was just a killer station. If anybody ever gets the chance to work for a number one rock and roll radio station, man, do it. The team effort that goes on inside a heavy rock station like that is just a real thrill.

Anyway, after a number of years of that, the opportunity presented itself to come downstairs to work for KMOX-AM as a Production Director. Robert Hyland called me and said, "I want you to come down here and do production for us." I said, "Sure, I'd love to. Where would I work?" He said, "Come down here and I'll show you your work space." So I went down and all they had was a couple of old Ampex 440 tape recorders, an old rotary pot board, and a couple of turntables. I said, "No thank you. I would really rather stay at KHTR." He said, "Why?" I said, "Well, because you don't have anything here. You can't expect me to do any production if I haven't got any equipment." He said, "You just make me a list of what you want." I thought, "Well, he can't really be that serious. When he reads the list of what I want, there's no way he's going to want to do this." So I sat down with some of my friends at the recording studio that I used to work for and said, "Let's sit down and make a wish list, everything we want." At that point, I wasn't real sure whether I wanted to do it or not because KMOX was an extremely intimidating radio station, and I didn't really have the background in news/talk. I just didn't know whether or not this was right for me. So, in the back of my mind, maybe I was trying to scare him off by making this wish list. Well I made a wish list of about $150,000 worth of equipment, and he bought all of it! He wanted me down there right after he approved the list, so I had to muddle through for a couple of months. I had to work around the engineers that were wiring up all the new equipment, so I really didn't get a lot of production done for about six months. That's how long it took the engineers to do their magic. I finally got the thing going, and it ran very well. I had just about everything I could have wanted back in 1980. After a while, the board that I had was starting to break down because I was putting it under some pretty serious use. I said, "You know, I'd really like to have a new studio," and Robert Hyland said, "Well, make me a list." So I made him another list, and this time I really did it up right. I hired a studio construction company that built the recording studio I worked at. They built studios for the Steve Miller Band and a bunch of other rock and roll bands. They really do beautiful work, not only with the equipment, but with furnishings and wall coverings, too. They came in and gutted three rooms and built the palace that I have right now, and this is where I've been sitting since about 1980.