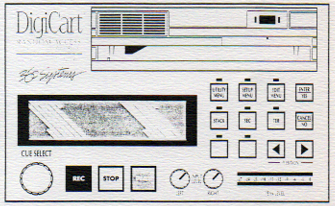 If you're a regular reader of the Test Drives, you know we've "driven" quite a number of machines that were DFTM -- Designed For The Musician. In fact, of the many digital recorders, samplers, and effects boxes we've looked at, only the AKG DSE-7000 truly "spoke" to radio production people. So it was a pleasure to get our hands on the DigiCart from 360 Systems. This is a digital recorder designed for radio people. There's another aspect of the DigiCart that's splendid. While this machine was built to replace carts and cart machines, it is much more than a simple record/playback deck.

The removable "cart" of the DigiCart employs the popular and reliable Bernoulli technology. The Bernoulli disks or "carts" are about the same size as a CD jewel box and about an ounce heavier. They're very sturdy, and one would expect these carts to stand up well to the stress of daily handling and use. The DigiCart offers four sampling rates for recording/playback: 22.05K, 32K, 44.1K, and 48K. If you don't intend for your recording to be used for anything other than broadcast, the 32K sampling rate is sufficient with its 15kHz frequency response. One Bernoulli cart will give you six minutes of stereo recording at 32K (or twelve minutes of mono recording). You get four stereo minutes at full bandwidth and about nine minutes at the lower 22.05K.

For use in the on-air studio, the DigiCart offers many benefits. However, if you presently play your music from cart, the cost of the Bernoulli disks ($40) makes a complete transfer of music to disk a little expensive and impractical. You'd do better to get some CD players in the control room. On the other hand, the disks provide plenty of recording time for spots, short programs, pre-recorded newscasts, promos, sweepers, etc.. One or two machines in the control room would nicely handle all your promos, sweepers and ID's, jingles, contest beds, as well as any sound effects you might want in the studio such as a cash register, crowd cheers and boos, etc.. This is where the features of the DigiCart really shine. Six minutes of stereo recording per disk is plenty of time to store all of your jingles, let's say, on one disk. You might even have room for all of your ID's and sweepers, depending upon how many your station uses. Having all of these elements on one disk basically turns one DigiCart into a dozen cart machines, or fifty, or a hundred. There are no carts to shuffle around. A simple twist of the SELECT knob in the DigiCart scrolls through all the available tracks on the disk.

The advantages of a DigiCart in the control room are many. It would be particularly useful for a morning show where a greater number of production elements are needed. But let's take a look at what the DigiCart can do for you in production. To begin with, we all probably have a rack of carts in the production room, each filled with a sound effect, bed, jingle, or some other often used piece of audio. The first thing you can eliminate is all of those carts. For every six minutes of audio you have on cart somewhere, you now only have one Bernoulli disk to deal with. Categorize your audio bites by putting jingles on one disk, often used sound effects on another. If your station has a "voice guy," a disk can be devoted to his often used lines such as call letters, slogans, etc..

Ideally, it would be nice to also have all of your often used music beds on the DigiCart, but at only six minutes per disk, you could easily eat up a few disks. So, it's time to upgrade our machine a bit. The DigiCart is available with an optional 200 or 400 meg internal hard drive. Recording at 32K sampling rate, a 400 meg drive will give you almost an hour of stereo recording. Now you can transfer thirty of your most used sixty second music beds to the hard drive and still have a half-hour left for other stuff. If that's not enough time for everything you'd like to have at your fingertips, you can always spend more of the boss's money and connect up to FIVE additional external hard drives, each accessible from the front panel. Now this little cart machine has quickly become a massive digital storage/retrieval unit! With five external drives and the internal drive, a station could easily store all of its commercials to a DigiCart system and play them back in pre-programmed sets on the air. In fact, using one or more of 360 Systems' DigiCarts, this is exactly what TM Century's "Ultimate Digital Studio" system does.

360 Systems was unable to provide us with a photo of the DigiCart, so we've offered a drawing of the front panel taken from the manual. The slot taking up most of the top portion of the panel is for the removable disks. The shaded rectangle above the REC, STOP, and PLAY buttons is a large, bright green LED display. To the right are buttons which access various functions of the unit. You also get two peak level meters and two input level controls. The CUE SELECT knob on the bottom right is used not only to select cues or tracks recorded to disk, but also for data input.

June 01, 2002 7044
by Steve Cunningham The venerable VoxPro editor has been around for several years now. Heck, it pre-dates consolidation, and the last time it was reviewed in these pages most DJs still worked live shifts. Much has changed since...
Read More...
© 1988 - 2023 Radio And Production, LLC
Go to Top