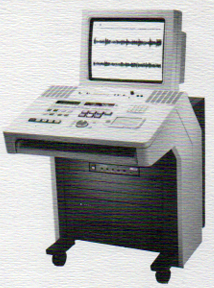 Digital recording has at once excited the imaginations and passions of radio broadcasters while at the same time has confused and disappointed them. A version of the "tapeless" tape machine is currently available from fifty-two different manufacturers. Each of them now has a very serious competitor. It's the brand new DDR-10 from Otari.

You get the quietest recording on earth -- 92db signal-to-noise with none of the "crunch" we associate with digital. You get the ability to accurately edit a single syllable of a word or perform edits to a music bed like no razor can. If you don't like the edit, it's no problem. Editing is non-destructive. You get digital signal processing with five band graphic EQ, an unlimited parametric equalizer, digital compression/limiting, expansion and noise gates. You get time compression, automatic fading and more. You get all this with an operating system that allows you control never known before, and you get it at an affordable price.

All that being said, the major limitation of the DDR-10 is that it is essentially a two-track device at this point. But don't let that fool you. Random access recording has many more applications in a 2-track format than it does in multi-track. If you're expecting speed as an advantage, like most other hard disk systems, the DDR-10 sacrifices quickness for an affordable price. In every other respect, the DDR-10 makes the best analog machines seem like toys.

At the heart of the DDR-10 is the Sound Tools disk-based digital recording and editing system from Digidesign. Sound Tools was introduced in 1989 and now boasts over three thousand users worldwide throughout the music, film, video, and TV industries. Now, Otari presents Sound Tools in a design more suited to radio production. Otari licensed key hardware components and the software system from Digidesign and brought the components together in a cabinet which sports a "broadcast friendly" control panel unique to the DDR-10.

To understand the DDR-10, it is helpful to first identify the major components.

Sound Designer II Software: This is Digidesign's operating software for Sound Tools and the DDR-10 and includes a sound accelerator board that plugs into a NuBus slot. When software improvements come along, you need only boot up the new disk. All pre-existing material is preserved intact.

MAC II computer: This is the only family of computers that will operate the Sound Designer II software. Otari supplies a Mac II ci with 5 megabytes of RAM with the DDR-10. There is a computer keyboard which slides in and out of the cabinet and is used mainly for naming soundfiles. The keyboard also accesses many of the options available from the system, however the most used functions have been transferred to the control panel. The DDR-10 comes with a 19-inch, 2-page monochrome monitor. You don't need color, and monochrome has greater definition.

September 01, 1997 11737
by Jerry Vigil In a world full of digital workstations to choose from, it’s a pleasure to come across the Orban Audicy. Like its predecessor, the DSE-7000, the Audicy is a workstation designed for radio production first. Radio...
Read More...
© 1988 - 2023 Radio And Production, LLC
Go to Top