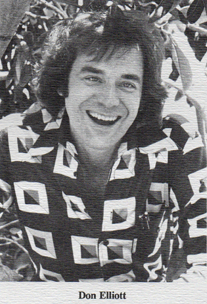 "Your attention please. The next plane to London is now in the final boarding stage." That announcer bit, from the classic hit "Next Plane To London" by The Rose Garden, was voiced by Don Elliott using a Neumann mike hung into a stall in a men's room because the reverb unit at the studio wasn't working. When Don wasn't earning his income in the men's room, he was programming stations such as KBEA/KBEY (now KBEQ) in Kansas City and KBLA (now KROQ) in Burbank. Most notably, Don spearheaded the format change from elevator music to CHR at KIIS-AM in Los Angeles, skyrocketing the ratings in a few short months from zero's to double digits. The marriage to KIIS-FM followed shortly thereafter.

Other accomplishments on Don's resume' include credits as producer of the audio for the world's first interactive video disk for Paramount called The Entertainment Game. Don produced and syndicated Charlie Tuna's American Forces radio show from his 8-track studio in Hollywood, and most recently has released his first production library, "The Legend." Don's credentials go on and on and include and endless list of credits for national voice-over work. We spent several enjoyable hours on the phone with Don. Here are some highlights from that conversation.

R.A.P.: Give us your thoughts on the invasion of digital audio into radio production rooms.
Don: I think the acceptance of digital will come and the demand for it will be there more and more as digital begins to give the advantage of speed in production. I can't see any gain in having a device that's an energy and time-sink that keeps you from getting the job done competitively quicker. You've got to have that compromise of speed and quality together, and when digital is as fast to operate as everything else is, then it will be an advantage.

Right now, what's available and what I think will be more in use in the near future is the DAT. Of course, very soon we'll have the recordable CD, but as far as the advantages of digital in a radio production room, DAT offers some advantages besides the quality.

I love the idea of using a DAT for the basic purpose of laying voice tracks. It renumbers each take as you go, and you don't have to slate or tone each one -- for those of us that pretend to be organized enough as if we did that in the first place. The DAT will renumber each take when it senses the sound again, so if you want to go back and play take 17, when you're in the midst of trying to focus on everything else that you're doing, you don't have to stop your thought process or a conversation with someone else in the room to go back and count bleeps and pops and slate tones and numbers. You push 17 on the keypad and it cues up while you're doing something else. Forget how great the quality is, the device, for that purpose alone, is just incredible. It's also great for archiving and mastering. To be able to get a couple of hours on something that's smaller than a standard size audio cassette is amazing. I've been using one for a little over a year now for just about everything. The access speed is good and so are the storage capabilities. These are just byproducts that people mention, but I find them to be some of the chief advantages.

R.A.P.: What about samplers and sampling keyboards?
Don: The sampling keyboards certainly go beyond the ability to stutter an effect. You can sweeten things up and drop effects in. Once you've sat and played with a sampler and let your mind go wild with it, the ability to be able to slide things around in any key and even play harmony with itself is pretty wild.

R.A.P.: Tell us about the format change at KIIS-AM.
Don: I always thought it had a hell of a potential with the way the signal was at the time. I was very much into trying lots of apparent loudness tricks with a guy named Jack Williams at Pacific Recorders. He had done some early experimenting, as did Mike Dorrough, with the Dorrough 3-band loudness devices in the early days of K-Rock. So, using some of the groundwork that they laid, with some of the playing around that I had done with EQ and some sophisticated compression, I was able to realize the potential of what you could do in the market with a signal that was barely competitive to begin with. This came into play at KIIS-AM when I went over there as Program Director.

The format at the time was elevator music. They had this massive campaign with these giant lips all over billboards, but they had a point one in the ratings! My analysis of the thing was that they had a lot of awareness -- the whole town tuned in to check it out -- but nobody stayed. So, I figured while we've got their attention, let's change the format and do something a little more spectacular. It started out as a real pure CHR. In three months' time, we got 13's during the weekdays and a 26 share on the weekends. That was with KIIS-AM alone, before we acquired the FM. We put in some pretty sophisticated things for the loudness of the signal and the quality of the sound was spectacular.