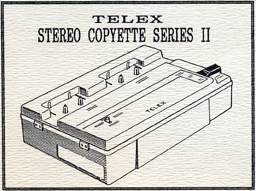 Cassette duplicators come in a variety of formats: 1 master to 1 slave, 1 to 3 slaves, and those expandable to 10's of slaves. Each format is available in stereo or mono. For radio production purposes, the 1 to 1 format is quite sufficient. If a mono duplicator is all you need, they are available starting at under $300. If stereo duplication is your fancy, the price about doubles, but these prices are for the no frills copier. If you want level controls and meters, or a slightly better than average frequency response, you'll be hard pressed to find a unit for under $1000. Go for a stereo 1 to 3 format, and be prepared to pay 2 to 4 thousand dollars for it. Why, you ask, so much for a duplicator? Consider that most duplicators copy at a speed of 30 ips, 16 times normal tape speed. If you have frequencies pushing 20kHz on your master, those frequencies, at 16 times normal speed, are in the area of 320kHz; a little out of the audio spectrum and more in the RF range. (320kHz is just under the AM band!) So, to pass those frequencies onto another cassette, the circuitry has to be a little more than a basic audio circuit. Alignment, tape speed, crosstalk, quality heads, and many other factors become critical at high speed, therefore ¬raising the cost of copiers. But thanks to today's technology, quality stereo duplicators are now more affordable.

With these things in mind, we can go on to say that Telex, a well respected name in duplicators, has a good duplicator in the Stereo Copyette at a price that won't devour your budget. We've seen list prices as high as $799, and sale prices as low as $519 for this unit.
The Stereo Copyette copies both sides of a cassette on a single pass, or you may flip a switch to copy just the A side. The only other controls on the unit are the mode select lever (Stop, Rewind, Copy), and a release button that disengages the copier from the copy or rewind mode. The copier auto-rewinds after copying. There are no level indicators or controls on the outside of the unit, however, should levels become a problem, Telex technicians did inform us of 8 potentiometers inside the unit that control bias and record levels for each of the 4 tracks.

Specs on the unit include a copy speed of 25 ips or 13.3 times normal speed, a frequency response of 50Hz-10kHz, and a signal-to-noise ratio of 45dB. The lightweight unit is enclosed in a plastic case and isn't much bigger than a small portable typewriter. It is modest in appearance but convincing in performance.

Unlike any other publication that would review a cassette duplicator, Radio And Production is able to do more than just tell you how well it works; This month's Cassette was copied on the Telex Stereo Copyette. We were pleased with the results and feel the unit can easily meet needs in radio production.

Pop this month's Cassette in and judge for yourself. A couple of items should be considered before you assess the unit based on The Cassette: The dubs you sent in were transferred to R-DAT tape first, then to a chrome cassette for the master, so one analog generation has been added. Also, the bias settings on the copier are for normal, ferric oxide type tapes. The copies were made from chrome to chrome. Telex informed us that this might result in the splattering of high frequencies on the copies. We noticed this only on a few of the spots on The Cassette. A 2 to 3 db cut around 10k with your equalizer will help a bit.

March 01, 1996 10615
Jay Rose, Proprietor, Digital Playroom, Boston, Massachusetts Jay Rose started like many of us do, in high school, with dreams of becoming a disk jockey. But rather than spending several years on the air and in production at a...
Read More...
© 1988 - 2022 Radio And Production, LLC
Go to Top