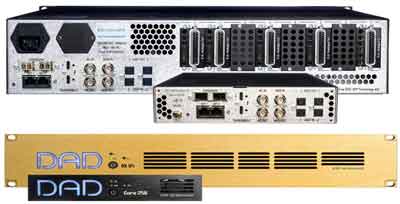 Digital Audio Denmark has been chosen for handling audio conversion and routing in many high-end recording studios, as well as mastering and post production facilities for years. However, there has always been an additional interface in between the company’s products and the computers. That is about to change with the Thunder | Core technology that is implemented in Core 256 and AX64, which are on display and demo for the first time in Europe at IBC 2022 (Booth 8.C50).

Thunder|Core is a direct link between the acclaimed DAD audio conversion, flexible routing and computers. At the core, two USB-C / ThunderBolt 3 ports with a capacity of up to 256 bidirectional channels and near-zero latency connects to Windows or macOS based computers, ensuring a steady flow of audio channels across Dante, MADI and ADAT.

“This is truly a milestone for us, as we’re essentially breaking in the last barrier between our well-known audio conversion and routing solutions and computers. And I am very exited to be able to present these new product to our European partners and customers at IBC,” says Mikael Vest, Sales Director, NTP Technology.

“Core 256 and AX64 have Thunder | Core in common, but are developed with different application purposes in mind, even though there are overlaps in some regards.

AX64 builds on the flexible, modular legacy of our AX32 unit, and has eight expansion slots that you can fill with any of our available expansion cards, including A/D, D/A, MADI, Dante and AES, as well as a processing card for speaker EQ or channel delay. Basically, you can tailor it to fit any pro audio application.

Now, the Core 256 is purely digital and much smaller, and while it can act as a digital bridge for any purpose, for example a DAW audio interface, it is the perfect solution for coupling with an Apple Mac Mini, running Dolby Atmos® Renderer, Dolby Atmos® Production Suite or Dolby Atmos® Mastering Suite. We even designed a dedicated rack shelf that can hold Core 256 and a Mac Mini, while only taking up 1 RU of rack space.”

Right out of the box, Core 256 comes with a total of 592 input and output channels across Thunderbolt, Dante, MADI and ADAT, but it can also be expanded with a MADI module, adding 128 extra channels. Finally, Core 256 comes with built-in 512x64 channels of Pro|Mon summing, SPQ Speaker EQ processing and capacity for 1,500 x 1,500 channels internal routing.

AX64 offers the same pristine audio conversion analog and digital (via expansion cards), as well as between various digital formats as the previous-generation AX32. But it adds Thunderbolt connectivity and ADAT, as well as onboard Pro|Mon summing as default and supports an internal routing matrix of up to 4,096 x 4,096.

Both Core 256 and AX64 come with two Thunderbolt ports, utilize 32 bit floating point processing, can be controlled via the Avid Eucon protocol and support Apple Silicon M1 and Intel processors.

For IBC 2022 visitors, both of these new Thunder | Core-powered units can be experienced first-hand at the DAD booth (8.C50) from 9-12 September 2022. More at digitalaudio.dk.