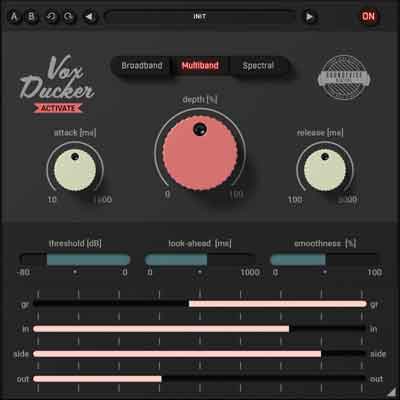 independent development teams federation United Plugins is proud to announce availability of VoxDucker as founding partner SounDevice Digital’s latest plug-in. VoxDucker provides automatic voice-over mixing using side-chain with three different types of ducking for varying transparency to allow more of the ducked signal to be preserved while keeping the side-chain signal clear and audible. Aimed at audio-book creators, broadcasters, podcasters, and video-makers, VoxDucker can work well on other signal types, including kick drum and bass or vocal and guitar, while partnering with SounDevice Digital’s Voxessor (applied to the voice track) to create perfectly balanced and legible voice-overs.

As audio-book creators, broadcasters, podcasters, and video-makers can too often testify, the delicate art of mixing the human voice with background music to create a perfectly balanced and legible voice-over can all too often prove to be a time-consuming, possibly painful process. It is, in fact, fraught with decision-making minutiae, given that each and every human voice is a unique-sounding proposition in itself while background music can clearly vary wildly in style and content. It is arguably far from the simple process that it could — or, some might say, should be — but, fortunately for anyone seeking a simpler solution, SounDevice Digital duly provides an answer in response to its own question: Do you need to deliver a perfectly clear and focused voice-over, but you also want to preserve as much of the impact in the backing as possible? Then use VoxDucker by SounDevice Digital!

Since SounDevice Digital’s VoxDucker promotes time and energy efficiency savings of automatic voice-over mixing using side-chain, it is simply a case of placing it on the track to be ducked — typically the backing music track — and routing the human voice into the plug-in’s side-chain input. It listens to the voice track, then ducks the music out of the way, thereby keeping the main focus on the voice itself.

Simpler still, since VoxDucker has been extensively tested in multiple scenarios, it is preset so that — in most cases — users only need to use the depth [%] control to set the amount of ducking to produce perfect results. Digging deeper is, of course, perfectly possible since the plug-in provides controls for fine-tuning the ducking process — primarily three different types of ducking, each offering varying levels of transparency to allow more of the ducked signal to be preserved by focusing the ducking on frequencies present in the side-chain signal. Simply switch between Broadband — ducks the entire signal; Multiband — uses six bands tuned to respond well to the human voice, preserving more of the backing as the bands with the least activity are ducked less; and Spectral — analyses the voice spectrum to duck only where needed as the most accurate mode of all, preserving most of the backing because only the frequencies present in the side-chain are removed from the input, albeit at the expense of increased latency and CPU (Central Processing Unit) usage.

Audible assistance apart, VoxDucker’s value in terms of time and energy efficiency savings also extends to its minimal yet informative GUI (Graphical User Interface), allowing users to focus only on the controls deemed to be of most importance, including an extensive metering section: gr shows the extensive gain reduction applied to the music track; in measures the track’s input volume; side shows the input volume of the side-chain channel (typically the voice-over track), and out shows the overall output volume of the track — instant visual feedback on the all-important ducking amount, as well as input, output, and side-chain signal levels, in other words.

That being said, VoxDucker shares several admirable attributes with fellow family members now numbering 30 plug-ins, each playing their part in United Plugins’ proliferating product portfolio, providing maximum audio quality by using internal 64-bit audio processing as well as being able to handle any sampling rate — 192 kHz (or even higher) — and also the fact that it intelligently detects whether it makes sense to perform any processing at all; if not, it temporarily turns on sleep mode, meaning it requires virtually no CPU power at all, thereby saving computing resources for other processes. Putting a photorealistic 3D yet flexible GUI to the test with VoxDucker, likewise, leaves its users with the impression that they are working with real world hardware; however, it easily adapts to their needs since they can always drag the arrow at the bottom-right corner to change its size — smaller to save precious ‘screen estate’ or larger to make it easier on the eye and, as a result, even easier to use than it already is.

March 01, 2007 8447
By Steve Cunningham I’ve been using WaveLab once a week for years to edit half-hour radio shows and to master CDs, and lately it has been pressed into service to edit assorted podcasts. Since its introduction in 1996, Steinberg...
Read More...
© 1988 - 2023 Radio And Production, LLC
Go to Top