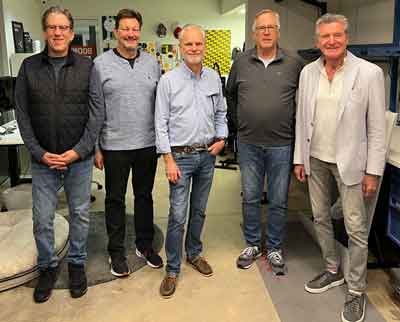 Audazzio, an innovative software startup and finalist in Comcast NBCUniversal’s SportsTech Accelerator program, recently held a summit that gathered its executive leadership, expert industry consultants, software developers, and other key members of the team. Audazzio Chief Operating Officer Danny Abelson and Chairman of the Board/CEO Roy Terracina were joined by industry experts Fred Aldous, Roger Charlesworth, and Michael Abbott, who together constitute the Audazzio advisory team, which was hand-picked by Abelson. The summit took place at the Boulder, Colorado facilities of Boomtown Accelerators, a partner in the Comcast NBCUniversal SportsTech Accelerator. The team explored the next steps in the ongoing rollout of the proprietary Audazzio Live QR™ technology, which leverages ultrasonic, data-encoded sound waves to instantly create valuable second-screen opportunities on viewers’ phones and tablets.

Abelson remarks, “The main purpose of this summit was to give our advisory team a chance to network directly with the developers of our technology. We spent a year collaborating remotely, which fortunately has been very productive for us.  We’ve been able to develop a technology from scratch, successfully demonstrate it on major network broadcasts, and confirm that it functions well in stadiums and arenas. But it was past time for all of us to get together in person for a concentrated session around a white board. I thought that it would really benefit the team to spend a weekend where we assembled all of our product developers and all of our industry experts, so they could share ideas and perspectives with one another. Our developers were able to provide a deeper understanding of the technology to our advisory team. They, in turn, will be able to communicate that knowledge to our customers. It was an immersive meeting. We worked together morning, noon, and night for three days, and we accomplished a huge amount. For instance, together we developed a workflow that our customers will be able to execute efficiently, so they can integrate Audazzio into their broadcasts and live events. Bringing together our advisory team with our development team made that possible. And at the end of the weekend, it was clearer than ever to our entire organization the stunning potential of this groundbreaking technology.”

Roy Terracina noted, “As CEO of Audazzio, and with a primarily finance background, it was inspiring for me to be part of these exciting technology development meetings and presentations. Amazingly, we were able to bring our entire team together in a forum atmosphere, on a June weekend, to discuss innovations and add to our strategic product roadmap. I’m proud to be a part of a “solution” that will change the fan experience in sports, live events, and many other potential markets.”

Roger Charlesworth is a multi-disciplined broadcast audio and television veteran who currently works as an independent expert on media production technologies, including multi-channel audio for television. Roger serves as Executive Director of the DTV Audio Group, an organization of senior-level broadcast network executives promoting best practices and successful strategies for the production and distribution of audio for digital television and related media. The forum’s primary goal is facilitating expanded personalization, universal accessibility, and advanced surround sound for viewers.

Michael Abbott is an award-winning broadcast audio expert who provides his engineering, consulting, and project management expertise to entertainers, major network television broadcasts, venues, and large-scale live events. He currently serves as the Audio Producer for the live GRAMMY® Awards broadcast, having served on the production team for several decades. Mr. Abbott’s other credits include many high-profile programs including American Idol, The Voice, and Shark Tank.

Abelson states, “I am grateful and fortunate to work with such a world-class team of industry experts who are authorities in their field. They work the largest gigs and have each single-handedly created standards used by everyone in their industry. They’re asked to sort out the most complex problems on the biggest broadcasts and stages. They do everything under the duress of a clock and only have one shot to get it right. And they have delivered year after year for their clients. What a unique opportunity for our developers to be able to rub elbows with people who have literally helped define live broadcast mixing, be it for high-profile sports programs, live awards shows, and beyond.”

The Audazzio Live QR™ solution encodes data as sound that is inaudible to the human ear but perfectly discernable by mobile devices – opening the door to a whole world of applications for savvy broadcasters, sponsors and beyond. Audazzio provides clients with tools that enable focused messaging directly to their fans in real time, either at home or in a stadium or arena. And crucially, Audazzio can provide clients the ability to understand exactly who is engaged with a game or event.

Notes Abelson, “Live sports broadcasts and games in arenas and stadiums are natural areas of application for our solution. We believe these examples are among the first of a very broad range of markets for our technology.”