Audified is proud to announce availability of MixChecker 1.2 and MixChecker Pro 1.2 plug-ins for quickly checking reference mixes without having to export them for listening on different speaker setups.

Audified MixCheckerAs a software application, software effect, and hardware processor developer dedicated to improving and streamlining music production workflow, Audified surely struck gold back in May 2016 when originally releasing its aptly-named MixChecker plug-in to widespread critical acclaim as a useful tool to quickly check reference mixes without resorting to established exporting-to-different-speaker-setup scenarios by simulating several consumer devices to save time when finding and fixing mixing mistakes. Far from resting on its laurels, however, the Czech company took the concept to a whole new level in July 2018 with its introduction of MixChecker Pro being billed as MixChecker’s bigger brother by featuring an equally easy-to-use UI (User Interface) but boasting a whole host of new features while simulating more than 60 different devices — the overall gain of which were all normalised to the same objective loudness using an algorithm derived from the LKFS (Loudness, K-weighted, relative to Full Scale) loudness standard designed to enable normalisation of audio levels for delivery of broadcast TV and other video (as standardised in ITU-R BS.1770-3) — and multiple environments, as well as radically rewriting the original signal processing code to achieve phase linearity, lower latency, and better resolution in all parts of the frequency spectrum befitting its implied professional positioning… unlike MixChecker, which only simulated the linear behaviour of the devices concerned as a more cost-effective solution.

Fast-forward to today, then, and Audified is introducing MixChecker 1.2 and MixChecker Pro 1.2 as advanced versions with welcomed updates initiating improvements. Immediately obvious is the fact that MixChecker 1.2’s redesigned and simplified UI speeds up workflow, but below the hood it drops the original’s simpler, less precise impulse response engine in favour of a more precise, technologically advanced processing engine adapted from MixChecker Pro that takes into account the non-linear behaviour of simulated devices using parallel warped filters, extended Weiner’s model calibration, and more extensive measurements. It includes improved simulations while also benefitting from lower latency and CPU (Central Processing Unit) consumption, with better and more stable performance as a result — not forgetting also adding Apple Silicon (M1) and Windows 11 support. Digging deeper, users can choose from 12 different consumer devices, Audified having made sure that the simulations represent the most accurate representation of each device concerned by spending weeks measuring their frequency responses and other behaviour in laboratory conditions to create accurate models that can be relied on. Of course, precise definition of devices and listening environments always afford users the best simulations with which to test their reference mixes in real time. 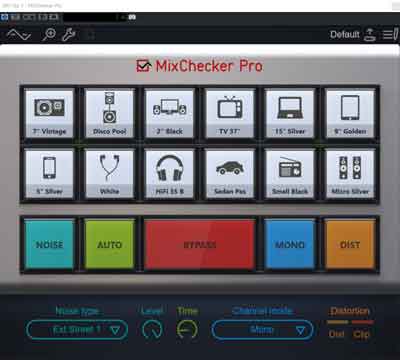 Audified MixChecker ProMeanwhile, MixChecker Pro 1.2 also benefits from a redesigned and simplified UI to speed up workflow, with improved simulations of over 60 different devices, device distortion, and added background noise as the ultimate tool for checking reference mixes without resorting to extra exports. Indeed, it features the most standard consumer devices in their most popular iterations, so users can quickly find the perfect reference device for almost any scenario. Selectable device distortion, mono compatibility, noise generation, and auto-scroll functions further combine to make MixChecker Pro 1.2 a very versatile proposition. Put it this way: with 14 different noise types and an ability to accordingly adjust their level, as well as monitor device distortion and clipping, MixChecker Pro 1.2 remains well worthy of its implied professional positioning. Possibilities for referencing mixes are almost endless since users can save their favourite sets of simulations with distortion and volume levels, also adjusting stereo base width to create their ultimate reference device. Thanks to the now-available Android and iOS apps, plus a dedicated web browser page, it is perfectly possible to control MixChecker Pro 1.2 remotely — feel free to move away from the mix position to experience another way of realistically checking reference mixes! MixChecker Pro 1.2 likewise benefits from lower latency and CPU consumption with better and more stable performance, as well as Apple Silicon (M1) and Windows 11 support.

Improvements introduced with Audified’s advancement of its aptly-named unique and useful plug-ins to MixChecker 1.2 and MixChecker Pro 1.2 status sees the software application, software effect, and hardware processor developer still striking gold in its continued quest to improve and streamline music production workflow, adding a new aesthetic value to customer’s work while helping them to achieve the best possible results.

MixChecker 1.2  and Pro 1.2 are available at $79.00 USD and $145.00 USD — from Audified’s online shop, which also includes further information and sound samples, here: https://shop.audified.com/products/mixchecker-pro.

December 01, 1997 9360
by Jerry Vigil Have you noticed how inexpensive high-powered computers are these days? Have you noticed the incredibly low prices of disk drives and RAM? Sure you have. Have you checked out the amazing quality and abundance of...
Read More...
© 1988 - 2023 Radio And Production, LLC
Go to Top