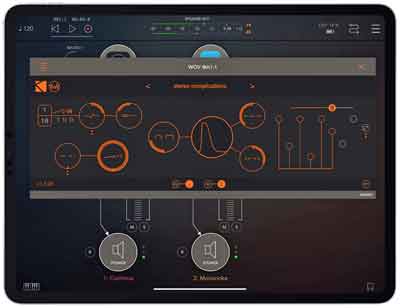 K-Devices has released WOV for IOS, an AUv3 effect plugin (Garageband, AUM, Cubasis, Auria, Modstep, Beatmaker 3, etc.) for creating a wide range of textural transmutation, from familiar static tremolo waves to evolving glitchy stutters. WOV for IOS comes with a set of intriguing presets from sound designers Richard Devine and Stév! It is a deeply creative tool that will bring an arsenal of complex amplitude modulation features to a wide variety of source and musical styles.

The Rate section determines the rate or speed at which WOV operates. Rate can either be assigned in Hz, or in fractions of a beat in sync with a hosting application. A bipolar Response knob sets the sensitivity with which WOV’s rate will either slow down or speed up depending on the volume of the incoming signal. The bipolar Variation control further introduces randomized amounts of variation to the rate.

Depth sets the amount of modulation over the dry signal. At extreme settings WOV will act as a repeating gate. Silence introduces more randomness to the plugin, increasing the likelihood that the amplitude will be zero for some cycles.

The Wave knob morphs between a quasi-sine shape and a slightly rounded-off square shape. Peak acts as an attack control for the waveform, while the Warp knob allows the user to either squeeze or expand the waveform, affecting the length of each sound. When the Wave control is set to a full square, Warp acts as a duty cycle / pulse width control.

The eight-step Sequencer uses a multi-slider to set the relative accent value for each beat of the rate. The slider adjusts between two and eight steps in length, and a button offsets the accents going to the right channel one step over from the left (Stereo must be enabled).

WOV can either preserve the stereo placement of its input signal, or it can add stereo offset to the output signal. Enabling the Stereo switch directly affects the Response, Silence, and Sequencer for a wider sound.

As part of encouraging more musical and creative applications of WOV, in addition to using symbols for controls, the controls in WOV do not have obvious individual readouts. We encourage the user to let their ears determine their design. However, if a precise readout is needed, one can see and edit it numerically by clicking on any parameter and checking the upper-right corner of WOV.

March 01, 2006 7916
by Steve Cunningham Every now and again a device comes along that makes you slap your forehead and exclaim “Why didn’t they think of this before?” Well, maybe not... but the little Tranzport wireless remote control for your...
Read More...
© 1988 - 2022 Radio And Production, LLC
Go to Top