Audio Design Desk, an entirely new breed of Digital Audio Workstation that uses AI-assisted content creation tools to enable filmmakers, editors, sound designers and creators to produce cinema-quality sound in seconds, has made its official debut in the media and entertainment market. The brand new audio creation tool is already earning industry accolades, being named on the shortlist of the 2020 SXSW Innovation Awards in the Music & Audio category. 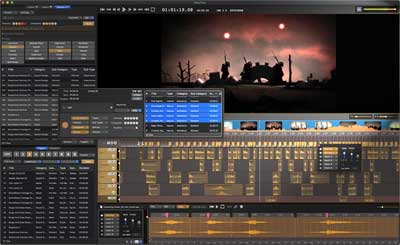 An audio design app that comes with more than 20,000 sounds, add.app completely transforms the process of adding music and sound effects to picture, cutting down what can typically be a full day project to just a few minutes. Using patent-pending Sonic Intelligence™, every sound in the add.app library is assigned identifying characteristics and carries an embedded sync point, which means that as sounds are previewed and chosen, they automatically land on the timeline in the exact right position relative to the video. The user simply imports a video file into the app and presses keys on their keyboard - H for hits, R for rises, D for drones, and so on - making it a Smart Sampler. The user can then strike the keys to position sound elements in real-time while watching the video playback - in effect, using the QWERTY keyboard to play add.app like an instrument. For users who would rather select audio manually, add.app can search, audition and place sounds right from the timeline, completely eliminating the need to parse through libraries, import sounds and then find where they sync.

Once a composition is set, add.app understands where sound connects to video and, by adjusting replacement criteria such as intensity, complexity, genre or feel, Audio Design Desk can use its Sonic Intelligence™ to instantly turn a single composition into infinite alternates without losing sync. Perhaps the most mind-blowing of all, add.app uses Artificial Intelligence (AI) and has built the foundation for Machine Learning (ML) to understand which sounds a user likes, and which sounds they reject so, over time, add.app will learn and adjust to its user’s taste.

Audio Design Desk was first conceived by Gabriel Cowan, a multi-platinum recording artist and award-winning filmmaker, to address the challenges he faced while finding and placing sound effects, sound design and music for his films. Frustrated with the time-consuming and creatively limiting process, he set out to modernize this workflow. Cowan teamed up with creative partner Sam Music, also a multi-platinum recording artist and acclaimed sound designer, who has created sounds for blockbuster trailers such as Spider-Man, World War Z, Rogue One and many others. Using Sam’s sounds, Cowan and Music joined forces with Ryan Francesconi, an accomplished musician and software engineer who was a core contributor to AudioKit and streaming technologies underpinning the likes of YouTube, to develop the innovative audio software application that would truly transform the art of sound for film and allow anyone to create a cinema quality soundscapes in seconds.

“This application is to audio software what Pro Tools was to the tape machine. It shows what AI-assisted content creation can do. Television, advertisements, podcasts, and Instagram stories are filled with sound, yet there hasn’t been a single piece of software built from the ground up dedicated to connecting sound to picture, which is why the process is so frustrating," says Gabe Cowan, CEO and Product Architect of Audio Design Desk. "While solving this problem, we discovered that we could advance the process tenfold to create a tool that becomes an inspirational partner that learns its users’ taste. The industry feedback has been extraordinary.”

“Audio Design Desk is a piece of software that revolutionizes the way I am able to produce content,” explains Matt Cooke, an Oscar-nominated documentary filmmaker and guest host for Larry King. “I’ll record a five- or seven- minute monologue and then create a short film out of it. Normally that's something that could take a month to do, but because of add.app I’m able to do the soundtrack and cues in less than a day, every time. It gives me the power to instantly put onto the timeline what I'm thinking in my head. There isn't another piece of software that allows you to immediately create something at this level of professionalism.”

At the time of launch, add.app already offers an incredibly robust set of features and capabilities that both professionals and enthusiasts can use for designing cinema quality soundscapes. Cowan states,

“Professionals love the cinema quality sounds and the time add.app saves them, while a first-time filmmaker or someone posting a story on Instagram or TikTok can now transform their work into an A-grade sonic experience with a few keyboard clicks. It is a game changer for creatives of all stripes.”

Perform Sounds in Real Time: Turn the QWERTY keyboard into a Smart Sampler to perform Hits, Rises, Footsteps, Punches, Gunshots, or any sound effect in real time, as the video plays back. Find the perfect music for your film, flipping through music options while playing video and saving selects with a single click. Audio Design Desk is by far the fastest and easiest way to find and place cinematic sounds.

Infinite Compositions: Once sounds are placed, add.app understands where the sync points in the video are, so swapping drama for action or horror for comedy or one shoe type for another, can happen in a single click - presenting the user with an infinite range of alternate compositions.

Search from the Timeline: In add.app, users can search for sounds right from the timeline, auditioning them with their video. This saves hours hunting through massive libraries and manually placing and editing sounds.

Integration with Today’s Leading NLEs and Hardware Controllers: Upon its entry to the market, add.app already boasts integration with the industry’s leading NLE software, including Adobe® Premiere® Pro, Apple® Final Cut Pro®, Apple® Logic, Blackmagic Design DaVinci Resolve, Avid® Pro Tools, and Avid® Media Composer, enabling users to easily export their compositions as an XML or AAF and open their sessions within the NLE of their choice - placing all the sounds in the timeline exactly as designed. add.app also works with hardware controllers like the Elgato Stream Deck, which makes the process of adding sound effects via keystrokes even easier.

Intelligent Sound Import: The highly intelligent sound importer in add.app makes the process of importing additional sound effects and music into the application incredibly easy. Users can attach metadata to their own audio files, giving their unique audio tracks the same rich information that enables add.app to automatically sync audio to the right moment on the video timeline.

Sculpting Perfect Soundscapes: Once the sounds are placed, users can tell add.app what genre, mood, or general “vibe” they’d like for their audio design. They can select how intense or complex they’d like the composition to be and then turn one sound design composition into infinite alternates without losing sync.

Audio Design Desk will be on display at the 2020 SXSW Innovation Awards Finalist Showcase on Saturday, March 14, 2020.

Audio Design Desk (add.app) is to audio software what Pro Tools was to the tape machine. It’s an entirely new breed of Digital Audio Workstation that artists can play like an instrument, revolutionizing the process of adding music and sound effects to picture and cutting down what can typically be a full day project to just a few minutes. It comes bundled with 20,000 sounds embedded with patent-pending Sonic Intelligence™, using AI-assisted content creation tools to enable filmmakers, sound designers, composers, and creators to produce cinema-quality compositions at the speed of thought, giving them a level of creative control that is unmatched by any other software. Visit https://add.app/ to learn more.

August 01, 2008 10089
In the beginning, there was the Yamaha NS-10 studio monitor. With its compact size and white woofer cone, and despite a distinct lack of bass and brittle high-end that required Kleenex over the tweeters — the specific brand of...
Read More...
© 1988 - 2022 Radio And Production, LLC
Go to Top