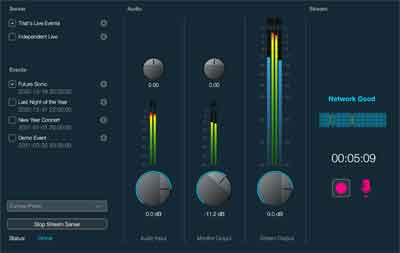 What was previously a prohibitively costly, complicated stratagem, streaming live events to paying audiences has effectively now been opened up to any band, DJ, orchestra, or spoken word artist who wishes to do so. Straightforward and fair in its implementation, the That’s Live specialised streaming service supportively provides the technical infrastructure for facilitating worldwide live event streaming to paying audiences with no setup charges and no fixed costs involved. Indeed, it throws an economic lifeline to many more of those trying to work within the tightly-restricted confines of a live events industry so severely impacted during today’s COVID-19-triggered turbulent times, thanks to developer Dialog Audio advancing into servicing such streaming so straightforwardly and fairly.

Getting going with That’s Live is straightforward. Start by registering online to use Dialog Audio’s live streaming service platform. Quickly create and schedule a live event and sell tickets to an audience worldwide with an automatically-generated event webpage that can conveniently be linked from social media channels, websites, and e-newsletters. The tickets bought from the event page are e-mailed to buyers after a successful transaction; ticket holders can then listen to the live stream as soon as the event starts. Simply speaking, Dialog Audio’s financial partner transparently takes care of all payments worldwide, including any taxes that may arise, while Dialog Audio itself handles customer support and, of course, the technical infrastructure. It takes an average of 15% for doing this, leaving the band, DJ, orchestra, or spoken word artist using the That’s Live specialised streaming service with an average 85% share of each ticket sold — can’t say fairer than that!

Talking technology, event streams are brought to That’s Live users’ audiences over Dialog Audio’s reliable CDN (Content Delivery Network), itself guaranteeing that the audio stream concerned can also be streamed reliably to remote locations anywhere in the world (within reason). Receiving listeners can choose from the widespread HLS (HTTP Live Streaming) format as an AAC (Advanced Audio Coding) standard for lossy digital audio compression encoded at 128, 192, or 320 kbps adaptive that can be played back on commonplace operating systems such as Android, iOS, Linux, macOS, and Windows, or MPEG-DASH (Dynamic Streaming over HTTP) format as an AAC standard for lossy digital audio compression encoded at 192 kbps that can also be played back on those operating systems, albeit not supported by all media players. Put it this way: while all commonplace media players — including iTunes, Mplayer, and VLC, to name but a few — can be used by listeners, commonplace web browsers can usually play one of those two aforementioned streaming formats.

For the benefit of any band, DJ, orchestra, or spoken word artist considering streaming a live event to a paying audience for the first time and attracted to That’s Live as a specialised streaming service platform providing the technical infrastructure to achieve that in the most straightforward and fair way possible, please note that it is also necessary to have access to recording equipment such as an audio interface (to create the audio signal), a computer with Dialog Audio’s Live Processor cross-platform desktop application installed (to pick up the audio signal and stream it to the connected stream server), and an Internet connection (to transmit the stream). Saying that, though, worldwide live event streaming with paid access is, perhaps, easier done than said with That Live!

November 01, 1997 13130
by Jerry Vigil How are you processing your voice tracks? Do you run your mic through a compressor/limiter and make EQ adjustments at the console? Do you also run the mic through a multi-effects box to apply a noise gate? This is...
Read More...
© 1988 - 2023 Radio And Production, LLC
Go to Top