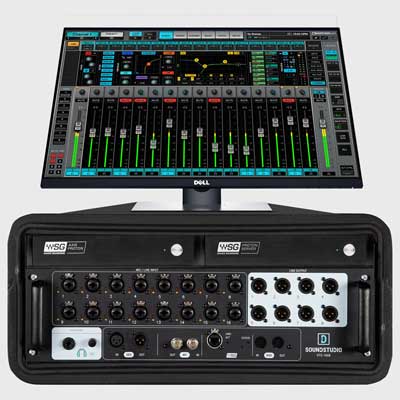 With the eMotion LV1 Proton 16-Channel Live Mixing System, it is now the time to completely change the way you think about your live mixing system. Never before has such a system been offered for an unprecedented cost of under $5K.

Forget about heavy, cumbersome mixing boards. You can now switch to a lightweight digital system, with everything you need to deliver captivating live sound experiences at a cost-effective price, easy portability and a small footprint. Best of all: the eMotion LV1 Proton system gives you access to the world’s largest selection of audio plugins, which you can run directly inside your eMotion LV1 mixer, all for under $5000.

The touch-optimized eMotion LV1 software mixer features 16 mono/stereo channels, each with a plugin rack that can host up to eight SoundGrid-compatible plugins for real-time processing. The included SoundStudio STG-1608 is a sturdy SoundGrid stage box, featuring 16 mic/line inputs with high-end preamps that can be controlled directly from the LV1 mixer.

All audio coming from the stage and through the plugins is processed on the included super-compact SoundGrid Proton server. Send processed audio out to the PA system and back to the stage via eight line outputs at lightning speed: Only 0.8 ms at 48 kHz.

For rock-solid stability, the Axis Proton computer is optimized to handle eMotion LV1’s processing power and perform reliably in the most challenging environments. It features an Intel Celeron processor, 4 GB of DDR4 RAM, one HDMI port, one display port, three USB ports, and a rugged 1U half-rack chassis.

Complete with a 24-inch Dell touchscreen, an eight-port SoundGrid switch, CAT6 Ethernet cables, and a 1U rack shelf, this combo gives you everything you need to run 16-channel live shows with big, pristine, studio-grade sound at an affordable price.

March 01, 2005 7441
by Steve Cunningham My old faithful Yamaha NS-10M studio monitors are dying. I noticed that the foam surround in the right woofer is starting to crack, and Yamaha doesn’t make the woofers anymore. I suppose I could look on eBay...
Read More...
© 1988 - 2022 Radio And Production, LLC
Go to Top