With deep training in both music and physics, brothers B.J. and Joe Buchalter founded Metric Halo over twenty years ago by creating ingenious solutions to the problems faced by audio engineers in the digital age. Adherents to the honorable business practice (and now we’ve come to learn environmental practice) of creating and supporting products that last a lifetime, Metric Halo engineers its audio interfaces to accept periodic hardware upgrades to keep current with computer technology and connectivity. 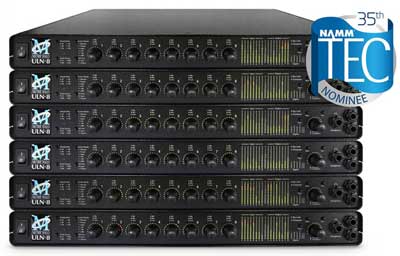 The latest upgrade, “3d,” is a game-changer and has earned Metric Halo its fourth TEC Award nomination, this time for the ULN-8 3d interface. Metric Halo will officially launch the final 3d software at AES (October 16 – 18) at booth #315, where they will be demoing the new 3d technology (highlights below) as well as Metric Halo Production Bundle plug-ins and SpectraFoo sound analysis software. Existing Metric Halo interface owners are encouraged to update their hardware by November 12th to take advantage of tremendous deals (highlights below) as part of the “3d Early Adopter” program.

In short, Metric Halo’s 3d technology replaces all of the digital and computer interfacing technology on every Metric Halo interface (including 2882s built in 2001!), once again making good on Metric Halo’s future-proof guarantee.

With 3d, users can use new MH Link and Satellite Computer Port technologies to build massive multi-box, zero-latency tracking systems (up to 128 channels at 192kHz). It upgrades the software environment to the 64-bit MIO Console 3d and gives all users full access to even more powerful onboard DSP and plug-ins. New MH EdgeBus card slots and modules let users customize their interfaces to the specific digital connectivity they require (e.g. ADAT, SPDIF, AES, MADI, MIDI). With 3d, computer connections are made with Gigabit Ethernet and USB-C technology. These are just the highlights of Metric Halo 3d, vastly more information is available at https://mhsecure.com/3dEarlyAccess/.

“Joe, Jon, Ed and I will be at AES, and we’re excited to have people stop by, say ‘Hi’ and check out everything we’ve accomplished with 3d,” B.J. Buchalter said. “We’ve already shipped thousands of upgraded and new 3d devices around the world, but AES will be the official launch of the final 3d software. We know a lot of people have been waiting for the final 3d software to build out their multi-channel recording studios or live sound recording rigs with Metric Halo interfaces, and we’re really proud to deliver on our promise in a way that is rock-solid, robust and stable. The sound quality and workflow are the best of the best, and we’re grateful that our revolutionary technology and future-proof approach has been acknowledged with another TEC Award nomination!”

B.J. added, “In addition to product demos in the booth, guest speakers will be joining us throughout the conference to show how they have used 3d, the Production Bundle and other MH products in real world projects.”

While 3d upgrades will be available for existing Metric Halo users to upgrade their interfaces for the foreseeable future, there are several compelling reasons to upgrade by the November 12th deadline to become an “Early Adopter”. In addition to early access discounted upgrade pricing and all of the improvements that come with 3d, including even tighter clocking and thus even better sound quality, “Early Adopters” save up to 50% off MSRP on additional new hardware units and EdgeCards. For example, adding the new 2020 TEC Award-nominated ULN-8 3ds to build out a rig would come to just $1995 per unit!

November 01, 1997 13146
by Jerry Vigil How are you processing your voice tracks? Do you run your mic through a compressor/limiter and make EQ adjustments at the console? Do you also run the mic through a multi-effects box to apply a noise gate? This is...
Read More...
© 1988 - 2023 Radio And Production, LLC
Go to Top